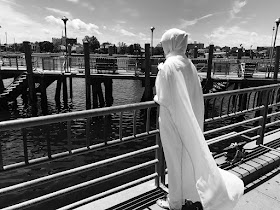 Q: Tell me about your upcoming show.

A:  Lost and Guided is a play that I wrote based on life stories and interviews with Syrian refugees in the United States. The play talks about how the lives of four young Syrians are changed forever after anti-government protests transpire in the city of Daraa. Throughout the next six years, each of them is forced to undergo a unique and heroic journey, while the turmoil in their country erupts into a full-fledged civil war.

And the unique fact about Lost and Guided is that 90% of the play are the actual words of the people I spoke with in person. When I began my research, I traveled to Michigan, Tennessee, Maine, Illinois, and around New York City to collect stories. I spoke with refugees and asylum seekers from Somalia, Sudan, Myanmar, Syria, Iraq, Bhutan, Burundi, and Russia.

And although Lost and Guided is a Syrian story, it is also a universal story. Dozens of interviews later it became clear to me that a book would not be enough to describe the life of one displaced individual. I also saw, however, that processes of displacement and resettlement in different geographical locations had a lot in common. Thus, I was able to combine various life episodes into one cohesive narrative without having to alter much of the original text in the transcripts.

A:  Lost and Guided story continues. We are planning to make the play into a film. The Angle Project (TAP), my theatre company, will also continue to seek opportunities to showcase the play and organize public forums centered around refugee issues.

In addition, TAP's focus is now on developing applied theatre projects and educational programming that cultivate cultural understanding and are specifically tailored for young people. My big hope is to contribute to the upbringing of an open-minded, responsible, and informed new generation of Americans.


Q: Tell me, if you will, a story from your childhood that explains who you are as a writer or as a person:

A:  March 8th, the International Women’s Day, has always been a big holiday in Belarus. The tradition to celebrate women carried over from the soviet times. It was a custom in our school for boys to prepare something special for girls and female teachers on that day and give them gifts. It was 5th or 6th grade, I believe… I re-wrote the classic Russian fairytale “Теремок”/“The Tower Room” into a contemporary story and organized the boys in my class to act it out for the school during the March 8th celebration. Basically, the story was about how various animals stumble upon a tower room in their forest and start inhabiting it, solving co-existence problems along the way. The fun part was that we preserved a variety of genders and the boys played female animal characters, like Mousy-the housekeeper, etc. To this day I remember having an extensive conversation with the boy who played Mousy about what kind of sarafan he should wear. The production was a great success.

A:  Honestly? Nothing. Because if I were able to change something about theatre than I wouldn’t be interested in practicing it. Let me explain… I look at theatre how I look at life. Just like life, theatre can be anything you want it to be, on one hand. On the other, as soon as you attempt to execute some sort of control over it, it backfires and just doesn’t work. So how do you find a balance? That is the challenge that keeps me going. Theatre, like any other art, is all around us and it is our job as artists to keep discovering ways to help the world recognize that.

But if we are talking about the industry, the biggest thing for me is working towards democratization of theatre and getting rid of the notion that it is an exclusive club. Why do we expect people to want to come and share our work if we make them feel like they don’t belong?

A:  Konstantin Stanislavski and Anton Chekhov laid down the foundation for my understanding of theatre. But here are (some of) the people who really expanded my idea of what theatre is and can be: Jerzy Grotowski, Samuel Beckett, Augusto Boal, Peter Brook, Sarah Kane, Ivo Van Hove, Robert Wilson, Kirill Serebrennikov, and Vassily Sigarev.

Joseph Papp is my role model and has a special place in my heart. He is my source of motivation because he's proved that it is possible to do exactly what you want in theatre without being a part of the establishment.

A:  Theatre that does not seek to please and numb. Any production that makes me reflect and question and that guides me towards a deeper, more compassionate understanding of the world around me is a good production, in my opinion.

A:  I think it is crucial to create work about something that you really really really care about and to ask yourself a question about how that work is going to make our world a better place.