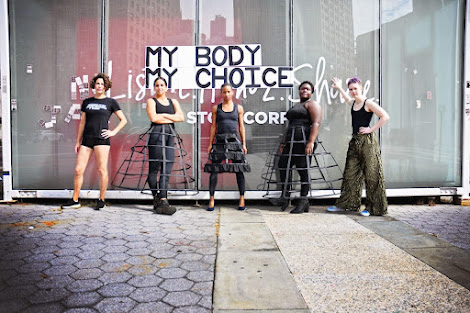 Q:  Tell me about "No Pants in Tucson" and your devising process:

A:  As with many of the shows that I’ve devised with The Anthropologists, "No Pants in Tucson" was born out of an event that made this story necessary. The core company members had been toying with an idea of creating miniature dance pieces in response to a handful of state laws targeting women that remained on the books. Some of them were ridiculous: “No wearing a housecoat while driving in California” and others were more overtly dangerous: “No withdrawal of consent in North Carolina.” Just as we were sitting down to brainstorm, Brett Kavanaugh was nominated to the Supreme Court and suddenly it became a very real possibility that Roe v Wade would soon be under attack. The connection between some of these outdated ordinances, specifically one from Tucson Arizona in 1883 that prohibited women from wearing pants, and current legislation aiming to regulate bodies felt palpable, like an invisible string you could follow from corsets to heartbeat bills.
And so we set off to investigate that. Is it possible that this archaic ordinance was this catalyst for the slew of anti abortion bills and anti transgender bills that we’ve been seeing over the past 3 years.

And from here "No Pants in Tucson" was born. We begin devising by asking the question, “What is up with America’s obsession with legislating bodies?” The Anthropologists uses source material and physical theater to explore and tell stories. We held a series of exploratory labs where we played with language, legal text, self defense choreography, transgressive acts via theatrical clown, Supreme Court transcripts, just to name a few.

Now as I’m sure you may have guessed, just as we were getting started, we all ended up in lockdown in our homes and our devising process, which is heavily movement-based, got stuffed into a Zoom box. At that point we made a very deliberate decision that we would be devising virtually to create an in person show. This required a shift. We started to zero in on historical characters that had been arrested for dressing “outside of their sex.” Ensemble and team members created digital explorations of these characters fused with other legislation texts we were discovering. We would film these compositions and then share them, build upon them, and share them again. The Anthropologists aims to work as horizontally as possible for as long as possible. This means that we invite all team members into the devising process. Dramaturgs, designers, directors, writers, actors. We are all exploring in whatever capacity the storytelling needs.

In Summer 2021, we began transitioning into scripting workshops. We started to pull from our content dictionary (a precious document that holds descriptions and videos of everything that has been created in the rehearsal process) and weave a story. Melissa Moschitto, the writer/director on the project began assembling script maps which the actors would improvise around and create within which then turned into script drafts. By the Fall we began working with a close-to-frozen script IN REAL LIFE, in a rehearsal room. We are currently in the production rehearsal phase.

In honor of that, here is the official blurb for the show:

"No Pants In Tucson" is a subversive comedy propelled by America’s obsession with regulating the female body. Drawing upon archaic state laws from the 19th and 20th centuries that made it illegal for women to wear pants in public, The Anthropologists’ newest devised play dares to calculate the costs of gender-oppression today.

Q:  What else are you working on now?
A:  For now, "No Pants in Tucson" is my main focus. I’m a mother of two young children who eat up any remaining creative energy I may possess.

Q:  Tell me, if you will, a story from your childhood that explains who you are as an artist or as a person.
A:  When I was in the 6th grade I was cast as Mrs Peterson in "Bye Bye Birdie." I freaking loved it. It never occurred to me to want to be Rosie or Kim. Mrs. Peterson was bizarre and quirky and got to wear my grandmother’s fur coat and my yellow rubber rain boots.

Q:  If you could change one thing about theater, what would it be?
A:  I think there’s still a stigma or an untrue consensus about which kinds of performances are legitimate and which kinds are not. I wish that weren’t the case. Theater gets to be whatever it wants to be. That’s what makes it exciting.

Q:  What kind of theater excites you?
A:  Truth be told. I like most of it. In grad school I was known to thoroughly enjoy sitting through everyone’s scene work and presentations. I like performing the weird shit. I like to move my body. I like to do choreography on stage that’s crisp and sharp. I love when there’s singing in a place that’s not expected. I love the swell of a giant Broadway musical number. I saw Adam Driver in "Burn This" and truly I cried because I was having so much fun. I adore solo shows both as a performer and audience member. I even laughed out loud during "The Play that Goes Wrong." It was silly. And I love silly.

Q:  What advice do you have for theater artists just starting out?
A:  There’s no such thing as cool. There’s making art. There’s joy. There’s vulnerability. There’s truth. But don’t try to guess what someone will like. Make something that matters to you. Tell the story you wish someone would tell you. Also work with people who you admire. I was so fortunate to have an incredible roll model when I first moved to NYC. Kara M Tyler, I’m looking at you! She taught me how to go all out and forget about playing it safe. She shaped the kind of artist I would become and one, I might add, that I am proud of.

Q:  Plugs, please:
A:  Come see the show! Did I mention it's funny? I promise it’s funny. https://www.theanthropologists.org/