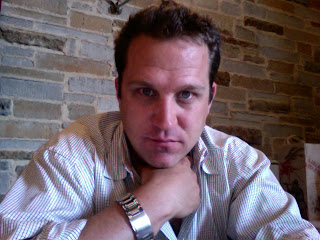 Current Town: Brooklyn, NY (like every other playwright you've interviewed.)

Q: Tell me about your play Matthew Modine Saves the Alpacas which is going up at the Geffen. How did this come about?

A:  I met Matthew while I was working on the TV show "Weeds". I was a big fan of his work prior to meeting him and an even bigger fan after I'd met him. He's not only a brilliant actor but he's a terrific human being. He's kind, he's honest, and he's generous. When I left to come back home to New York, Matthew and I vowed to work with each other on a play. Six months later, I pitched him the basic idea of MMSTA, he loved it, and we were off.

Q: A friend of mine recently took your TV class. He said you were a great teacher. Can you talk a little about how you set up your class?

A: I focus on the business of making television. I assume that everyone who takes the class can write. I would rather focus on how good writers can break into television and how to become aware of yourself as a commodity to be sold to the marketplace. Pretty much, the class is me talking a lot. I talk about my experiences in TV, good and bad, I share my very strong opinions, and spend the rest of the time begging them to take everything I say with a huge grain of salt.

Q: What TV shows did you write for?

A: Weeds, Monk, and Book of Daniel.

A: You got a job for me, Adam? I'd love to live in Atlanta and have a free maid! I'm very fortunate to have found Mark Armstrong and the Production Company, an excellent off-off Broadway theater company. I've been named their playwright-in-residence and have written a play for the company called MEG'S NEW FRIEND that Mark will direct at Manhattan Theatre Source in November and December.

A: I am in awe of playwrights. EVERY playwright. I began as an actor and I am always amazed at the unique worlds that playwrights construct. Herb Gardner once said, not to me, but to someone, "How do you ask a kamikaze pilot if his work is going well?" Playwrights are kamikaze pilots, trying to find targets that doesn't exist. How can you not find the lifetime pursuit of an ever-moving target heroic?

Q: You are, like me, married to another playwright. Would you recommend marrying a playwright?

A: I would recommend marrying my wife. She's really spectacular. Everyone should get the chance to be married to my wife at least once.

A: Marry my wife. That, and put the name of a famous actor in the title of your next play. Matthew Modine is mine but I think Judd Nelson is looking to do some theater.

A: I love watching great acting-- that's why I go to the theater-- so any play that offers actors the ability to stretch themselves excites me. I also like anything written about farm animals. Link for Blair's show: http://www.geffenplayhouse.com/180
Posted by Adam Szymkowicz at 8/12/2009 09:31:00 PM