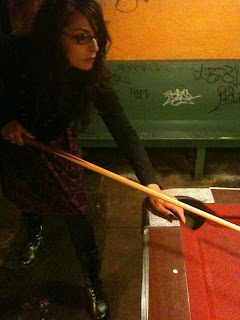 A:  Mouse in a Jar is my curiosity about our defense and protection of the things and people that harm us. And the notion of saving someone – what lives a little deeper under the surface of that desire. In its marketing, the LIDA Project in Denver called it subterranean punk – a horror story about underground life forms, Stockholm Syndrome and the grace of bondage. Things are darkly magical and personified. The house breathes. Or it heaves, rather. A man’s leather belt turns into a whip, then a snake, then gauze. Cicadas and coughs are music. I wanted to tell the story of this immigrant family living in the basement, under domestic violence and illegality, the mother’s unwillingness to leave and her children’s determination to change that. But I have issue with the way a lot of “domestic violence stories” are told onstage and in film – which is alienating, for the most part, and melodramatic. So Mouse in a Jar is expressionistic, with mystery and (I hope) humor and dark magic. And there were to be no victims. Everyone would have agency and ferocity and conviction.

A:  I just finished a draft of a play. I think it’s about self-fulfilling prophecies and our relationships with our enablers. Oh no… I just discovered a pattern…eh, fine. At the play’s center is a newly-orphaned skeptic who has just inherited a fortune-telling business, an unconventional street performer that founds a new art that stimulates senses we didn’t know we had, and the people of their crumbling neighborhood that seek things from them both. It may also be about sex and desperation. And loss and storytelling. And the magic of danger. And the currency of punishment. Pardon the excitement and conjunctions – it was just born last week. I haven’t named it yet.

A:  One day, I came home from school to find a dismembered pig in the living room. There were raw pieces of it separated on plates on the floor. And those plates were lining the hallway that led to my room. The first piece I saw was a pinkish hoof. Second, a pinkish leg. A thigh, third. The second thigh. Intestines. The segments, I realized, their placement, had a logic. A progression. I remember understanding I’d eventually find the head. This terrified me. But I had to be in my bedroom, locked, by 4:30. There was no other way. As I walked down the corridor of meat, I remember feeling scared at first, then nervous, then anxious and finally eager. By the time I found the head, I was disappointed. It was pretty much exactly as I’d imagined it. Bugged eyes. Little teeth. Skin like one big scab.

I remember my mother asking me later if I wanted to know why there was a dismembered pig in our house. I told her at that point, I didn’t care.

A:  Health insurance. With dental.

But to each one’s own.

I have never felt more intimate with a writer for the stage. I think the fourth scene of Phaedra’s Love between Phaedra and Hippolytus is the most perfect scene ever written. Her boldness to present the truths she saw is flooring. And a call, I feel. A challenge to present the heights and depths of things – baldly and disturbingly, if need be, however feels honest. She dared to be intense and naked; she communicated by peopling her plays with primal, fractured, hungry, hunting characters going to the ends with everything they have until there’s nothing left. Her language is able to boil down the densest, most complicated notions and translate them economically into bitingly poetic, active dialogue. She pushes me to dare.

And then there are the unpublished, unproduced gestures of theatrical heroism. People that read drafts and attend shows, all with their own past and present struggles and limited time in existence, gifting the writers of those drafts and the creators of those shows with their attention. I respect those that believe in a thing enough to work its offices and clean its toilets. Then read your draft.

The mentors. Paula Vogel, Ken Prestininzi, Aaron Carter and others, past, present, future.

Also, the city of Chicago is my theatrical hero.

A:  Theatre that makes my body react. Makes me gasp or tense. Shiver, laugh, weep. If a show makes me weep, it stays with me always. I think what does it are gestures of striving and rawness. I remember some point in Anne Bogart’s Hotel Cassiopeia just broke me. I think it had to do with offering. I remember feeling this sense of communal loneliness and finding it so achingly beautiful and acceptable. I’d witnessed the kindness of offering and so kindness, in the world, I understood, was available. Recently, Ivo van Hove’s Teorema unstitched me. That was a show of blazing, vulnerable, violent lust co-existing with simple kindnesses – a young, able man adjusted an older, tired man’s leg to facilitate his more comfortable rest and I lost it. But, for me, that gesture had to be paired with the intense, familiar ugliness of those characters’ raging desires. That made me see the kindness. “Thank you” at the end of Sarah Kane’s Blasted is catastrophically kind. It’s real – we’re all actually still children. I see goodness best amongst a lot of cruel. I love a theatre that gropes for beauty in the dark. I love to leave ravaged, carrying something that will gnaw me until I look at it.

So, one that recognizes our fears and desires. Or that we fear and desire.

I’ve been especially excited about the urgency and liveness of devised work/performance art lately. Its drama of deceptive simplicity. Its inventiveness. But I still get genuine satisfaction from a well-wrought story with complicated characters. I’d love a marriage of the two. And I don’t think that has to be relegated to the directorial necessarily; I think it can be in the play.

A:  I’m humbled by this question. So from one striver-seeker to others:

Respect yourself. Your time and your solitude. Your choices. Decide you are a playwright. Own it. Do the work. Funnel yourself as completely as you can into the task of becoming an honest storyteller (or conjurer of things). Understand it takes time and effort. But attack it, nonetheless. Read things, see things, step away and live in the world. Save some energy to also just be a person (or burn out, be a person for a while, return, repeat). Take yourself seriously enough to get your work read but not so seriously you close yourself to improving. Or become a jerk.

Be good to people. In general.

Question the surfaces of things. Where’s the beauty under ugly. The terror under peace.

In writing/crafting, remember the wealth of human responses you potentially have at your mercy. Our emotions and psychologies are vast and absurd. We’re capable of being frightened, elated, titillated, worried, elevated, seduced…oftentimes, in seemingly nonsensical combinations. And writers/makers can cause them. Burrow deeply in dark places. Endeavor to conjure all kinds of things in us. You have us for a few hours. Wring us.

A:  I’ll soon begin working with The Satori Group, an exciting experimental theatre ensemble in Seattle, on a yet-to-be-titled play. Also, watch out for another devised theatre ensemble called Overhead Projector. If you’re around New Haven, please do stop by the Yale School of Drama – I’ll have a play up in November. By then, it too shall have a name.
Posted by Adam Szymkowicz at 8/06/2010 09:04:00 AM

What a load of self-indulgent, pretentious crap. If you want "health insurance and dental," get a real job that provides something most people actually need and/or care about.

Why are you reading my blog?

It's a blog about theater. If you don't care about it, why spend time reading about it?

Hello Everybody,
My name is Mrs Sharon Sim. I live in singapore and i am a happy woman today? and i told my self that any lender that rescue my family from our poor situation, i will refer any person that is looking for loan to him, he gave me happiness to me and my family, i was in need of a loan of S$250,000.00 to start my life all over as i am a single mother with 3 kids I met this honest and GOD fearing man loan lender that help me with a loan of S$250,000.00 SG. Dollar, he is a GOD fearing man, if you are in need of loan and you will pay back the loan please contact him tell him that is Mrs Sharon, that refer you to him. contact Dr Purva Pius,via email:(urgentloan22@gmail.com) +918376918351 Thank you.