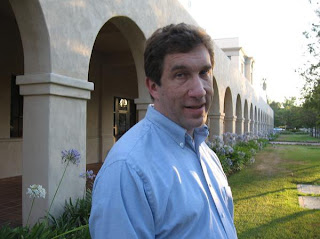 Q: Tell me about "Cabfare For The Common Man"

A: It's kind of like my first "album". I took a bunch of ten minute plays that I had written, and picked out the very best. The last play has the same title as the whole collection -- I really did want it to be like a record album. Er, CD. I mean a collection of mp3s. Anyway, it's an evening of romantic comedies. Some are naturalistic, some more stylized. Not every play is about romance actually -- but they're all about love. It's getting produced in New York this month, by Sweet & Tart Productions. The artistic director is Brad Caswell. He's directed a lot of my plays before. Every time he directs my plays I win awards. And "Cabfare" is also opening this month at Madlab Theatre in Columbus, OH. They're an excellent company. I've been honored to have plays in their "Theatre Roulette" evenings for years. And I'm so glad they're doing the whole evening now. Theatre Unleashed, in Los Angeles, will be producing another evening of slightly different plays, called "La Vie En Route".

A: A bunch of different ten minute plays, two musicals and (gasp) maybe a full-length. I want to write a full-length, I really do. I just need to come up with an idea that I feel like I can sustain for an hour and a half. I feel like the cardinal sin of the playwright is to bore the audience.

Q: You are one of the modern masters of the short play. How many 10-15 min plays have you written and what is your current total number of productions?

A: Thanks! Not sure I'm quite at modern master yet, but I'm trying. I've got 40 ten minute plays, plus another dozen monologues and one-minute plays. I'm at 580 productions since the start of 1998!

A: For short plays, definitely David Ives. For longer plays, I love Tom Stoppard and Alan Ayckbourn. And for musicals, Stephen Sondheim.

A: I love when theater is...well, theatrical! When they don't try to mimic film or television but do things you can only do on stage. I love a clever low-budget device more than lots of overhead projections or expensive sets. Some of the best theater I've seen was done on a nearly bare stage. I like when theater can produce a magical image in your mind, or a lasting impression in your heart.

A: Write. A lot. Try to write every day. (If you can get yourself to do this, let me know how). And read a lot of plays, and attend a lot of plays. Join a local theater company and help them out. Try to get your work read to you by actors. I've learned more by hearing my plays read out loud then by most playwriting classes.

MADE HERE is a website and docu-series exploring the sustainability of performing artists in New York City through the stories of a diverse group of 40 artists throughout the five boroughs.

To celebrate the completion of Season 1 of MADE HERE and to continue conversations that have occured both online and in person, HERE is partnering with the Martin E.Segal Theatre Center for a very exciting event.

Join us for a screening, discuss myriad issues and the genesis of the project, and participate in the panel discussion with:

This event is co-curated by Frank Hentschker and Tanya Selvaratnam, and is free and open to the public