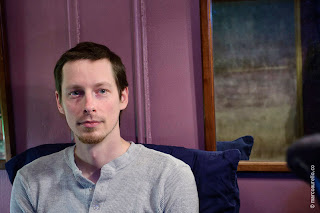 Hometown:
I was born in Raleigh, North Carolina, but apparently my parents decided that wouldn't do for our burgeoning meth habit (the family that tweaks together ... ), so we relocated to Phoenix, AZ when I was like 3, where I was raised. However, I'm really, really, really not a fan of Phoenix, so I tend to consider Tucson, where I went to school, my hometown (all of the desert loveliness, maybe 30% of the racism).

Current Town:
Right now, Bay Ridge, Brooklyn. I love my borough passionately, and Bay Ridge is a phenomenal neighborhood, but I'm definitely yearning to move a little further North. Although, I do get some good writing done on my often-more-than-an-hour commute.

A:  I'm finishing up the first draft of a script that's actually been kicking my ass for many months now. It's the closest thing to a romance I've ever written, with none of the genre-y supernatural plot mechanics I usually like to play with, so it's been a big challenge on a whole host of levels. It's called Old Familiar Faces, and it's a four-hander concerning two couples: Charles and Mary Lamb, the brother/sister team (no funny business, don't worry) who wrote, among other things, the famous children's book Tales from Shakespeare, and who both suffered from severe mental issues (Mary had a breakdown and stabbed their mother to death with a carving knife one day), and a contemporary American couple modeled after Laurence Olivier and Vivian Leigh, who are similarly no walk in the mental wellness park. While their stories don't interact, they weave in and out of each other, along with scenes from the works of Shakespeare almost like numbers in a musicals, and the whole thing's a kind of love letter to the Bard, but also an examination of why such damaged people might find solace in his words.

After I finish this little beastie, I've got a number of other scripts lined up: an evening of monologues about a haunted house called Foundations, a sequel to my play The Reckoning of Kit & LIttle Boots called The Romantics' Comedy, a multi-play arc following a trickster god through different awful moments in history, and a couple of fun space dramas. I try to write two full-lengths a year, so these'll take a little while, but I'm kinda picking at them all at the moment, and I don't know which one will jump up and demand to be written exclusively next.

Q:  Tell me about your band.

A:  Nat Cassidy & the Nines is a melodicfolkrock outfit that's taken the world by storm (if by world, we mean very, very, very small rooms of people in, usually, Park Slope). The band is comprised of me and whomever I can trick into coming onstage and playing with me. But I like to track a lot when I record songs (I have three albums done now and am working on a fourth), so it's fun to pretend there's an actually band playing on my records and not just a sometimes-inept jackass with Garage Band. Hence, Nat Cassidy & the Nines. However, I do play a lot in a handful of other bands (usually "supergroups" with other singer-songwriters, like Brian Pluta, Alexis Thomason, and/or Angela Hamilton) that sometimes play as the Nines--it usually depends on who booked the gig.

A:  Well, there was that one time that Henrik Ibsen touched me in my bathingsuit area, but I'm not allowed to talk about that, legally, so here are two quick anecdotes I can think of that pretty much sum me up as a kid (and ex-kid), for better or worse.

I was raised by a single mom in a pretty poor area in Phoenix, where you can't really go out and play because a) there's not much you can do with concrete and weeds and b) you run the risk of immediately catching on fire. To make matters worse, we were only one of, I think, two families in our immediate area that owned a house--everyone else rented and would usually move away within a year or so--so, 90% of the time, there weren't even any kids around. Plus, my mom had MS and could only work part-time, so we really couldn't afford to do many fun things. This resulted in me being on my own most of the time, and usually left to entertain myself--so I read a lot and I got into A LOT of trouble (fights, setting things on fire, trying to throw rocks into passing cars, etc.).

So, I was a terror in school, and a teacher's nightmare. I was especially at odds with my first grade teacher (a shriveled, blue-haired goblin of a woman, if memory serves), who made me sit at her desk instead of having my own (something two other teachers would try in later years), and who put me on this ad hoc system whereby I had to bring home a red or a green card to be signed by my mom everyday, so she could know whether I had been good or evil. None of that really stopped me from being a general asshole, though - the one thing she did that actually succeeded in calming me down was one day, when she was giving a slide presentation of a recent trip to Greece, she showed a picture of a theatre where she saw a production of Macbeth. She started telling the basic plot of the show, and at the mention of witches and murder, she saw me perk up and start paying attention. After that, she challenged me to try to read the play - which I agreed to do immediately, most likely out of spite. And, though it took me pretty much the remainder of the school year, and though I make no assumptions about how much of it I actually *got,* I did it and it was then that I got hooked on Shakespeare. So, I've been reading Shakespeare since I was in first grade, thanks to a demonically cruel teacher who still somehow accidentally made a huge impact on my life, the hag.

The other quick illustrative anecdote is: when some kids finally did move onto our block when I was like 12 or 13, they were a few years younger than me, so I decided to see if I could convince them that I was a werewolf. I gathered up all these, for lack of a better word, candid photos of coyotes and wolves that I had taken at the Desert Museum (a big Arizona backyard that acts as a sort of zoo), along with some fake diary entries (torn and tattered, when appropriate, along with scrawled, werewolfic handwriting documenting The Change). It totally fucking worked. It also succeeded in preventing those kids from ever hanging out with me again. And if that doesn't sum up what I do as a playwright, I don't know what does.

A:  God, that's a great question. If I had to pick just one and only one thing, it would be: we'd be allowed to video tape our well-attended (thanks to cheaper, more efficacious wide-spread advertising and an audience more eager and prepared for live performance) productions, which were all taking place in one of the myriad affordable, modern theatres made possible by the staggering number of arts subsidies available. That's the one thing.

A:  As an actor, I was raised on the classic British Aaaaactors like Olivier, Burton, O'Toole, Gielgud, and the like. My capacity for such lugubrious lachrymosity has cooled in my ripe old age, but they certainly had their impact on me and kept my love of classical texts roiling for most of my life (I was also a HUUUGE Branagh fan when I was younger, but all it took was seeing his Frankenstein movie in my early 20s to snap myself out of that love affair). As I writer, I'd say I often go to the works of Shakespeare, Stoppard, Ionesco, and cats like that for inspiration--and, if I can plug a couple of non-theatrical people who were probably the biggest influences on me as a writer, it'd be Stephen King, Kids in the Hall, Mr. Show, and The Beatles. However, all that being said, these days my real theatrical heroes are the scrappy indie kids who are producing their own work and trying to make it better each and every time.

A:  I absolutely love the kind of work that Nosedive, Gideon, Vampire Cowboys, Flux, et al. do - original scripts with often twisted mentalities exploring real people in somewhat unreal situations. Basically, if it's honest and it's a little fucked up, then count me in (but it's gotta be both. And a body count never hurts). It's seriously such an honor to be a contemporary in the independent theatre scene these days. It's maddening to have to choose what shows to see and what shows to have to miss forever, but, particularly with the companies above, I know that I'll come away from any production with that perfect combination of jealousy and excitement that drives me to try to make something as good.

A:  Not to sound like a shill for Nike or anything, but when it comes to writing, the biggest thing is to just fucking do it. Write that first draft. Let it be crap. Let it embarrass you. Just get it done. It can be helpful to think about having your characters say only what they absolutely need to say, no matter how clunky or obvious, to move the plot and the characterization along and worry about making it exponentially less shitty once it's out of you. It's about 4 millions times easier to rewrite than it is to write, so just fucking do it.

Beyond that, once you feel that your script is how you want it to be, you're going to experience about 8,000 people telling you all the things you could do with every single moment. Theatre, for some reason, is the most backseat-driver-prone artform imaginable. Listen, digest, never feel you've got to change a thing, but pay attention if there's a consensus.

A:  No dates are set at the moment, but I'm working on putting up one of my newest scripts called Songs of Love: A Theatrical Mixtape. It's a series of short plays--some dramatic, some comedic--all centered on one theme (in this case, bizarre relationships), interspersed with original music performed onstage by a singer-songwriter (in this case, me), creating, as it were, a theatrical mixtape. I wanted to combine my songwriting and my background in sketch comedy (especially as my full-lengths scripts threaten to get longer and longer) into one 90-minute evening that's essentially a celebration of those love-filled cassettes we're all still hanging onto somewhere in our hearts/apartments. Hopefully, we'll have firm dates for that soon, since it's a really fun show that I can't wait to share with folks, and doubly so because I'm hoping to make it the first in an indefinite series, with future mixtapes featuring different playwrights and singer-songwriters.

Beyond that, I'll hopefully be appearing in the Off-Broadway remount of Retro Theatre Productions' (another of my favorite companies) revival of THE RUNNER STUMBLES, which ran to much acclaim last November and is a really, really lovely piece of work. If you'd like to donate any amount of money to the cause and be a hero forever, you can find more information at www.retroproductions.org
Posted by Adam Szymkowicz at 2/18/2012 11:33:00 AM