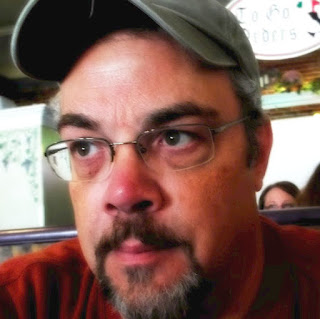 A:  A few things; a one-act tentatively called "With Special Mirrors" - which comes from the Bertolt Brecht quote, "If art reflects life, it does so with special mirrors." I wondered how far an audience member (or members) could go to disrupt or even invade a production. I've always played around with the "meta" concept of theatre, even in my comedy murder mystery scripts. I want not only to break the fourth wall, I want to burn it down in this play. I've been intrigued by the new stories where Broadway shows have come to a halt because a cell phone rang or the case where an audience member climbed on stage, looking around the set for an outlet to charge his phone. I think sometimes the "alienation or estrangement effect" can be created in the theatre without even trying to achieve it.
And for juxtaposition, I am also working on a comedy murder mystery about a dead body being found in a supermarket aisle display for paper towels.

A:  I was an only child so my imagination took the place of siblings, so to speak. I have several vivid memories of creating stories about inanimate objects or how certain household objects became broken for the pure entertainment of whoever would listen. I don't believe my mother or anyone ever told to stop making things up. So, I never stopped. I started writing things down instead.

A:  The cloud of self-importance that frequently arises in and around theatre groups and gives birth to cliques. There's nothing more off-putting than artists taking themselves way too seriously. Beside metal detectors, I believe "pretentious" alarms should be installed.

A:  I always had an enormous amount of respect for Sam Shepard and his body of work. I got to play Lee in a production of "True West" and learned a lot about style and substance. Also, I have to the actor Earle Hyman special props. I sat in (snuck in) to one of his classes at HB Studio back in the 80's and I learned more about the craft of acting in one hour that I did in all years of college theatre classes. He would interrupt his student's scenes and say "Please! Stop Acting! (few beats) OK Continue." I knew exactly what Mr. Hyman was trying to convey. I think at times I
use his advice as I am writing. I will think, Stop Writing. You know, stop trying to sound like Oscar Wilde, Mamet or Miller. Just sound real.

A:  Theatre that becomes so real and natural it transcends the threshold of disbelief. It could be the dialogue or it could be a performance. Example - I saw "Fifth Of July" on Broadway back in 1981 or 82 (the Richard Thompson version) There's a confrontational scene in Act Two powered by Lanford Wilson's words and the performance of Jonathon Hogan and made me very uncomfortable. I felt as if I were visiting someone's home and an intense argument erupted by the hosts. You know, that awkward feeling you get where you want to get up and quietly leave. I had that exact feeling there in my seat. I never realized theatre could do that and that excited me.

A:  Listen to how people really talk to each other. Watch how the people around you get what they want. Real life motivations. Cause and effect. Sure, you may learn valuable things from academics and dramaturgy but look out the window once in a while.

A:  I always grab whatever spiral notebook I can find. It could have old notes in it from my freshman astronomy class. I don't care. I prefer black ballpoint pens. Blue will do in a pinch. My go-to font used to be Courier - because I read somewhere that was the proper playwright font. But lately, I've been using Garamond because it reminds of the font in the old books and plays I used to read. Minus the musty smell.

A:  Well, my comedy murder mystery plays pop up at High Schools all over the country. On the international scene, I recently was contacted by a group over in India called Cineplay. They are interested in turning my "An Audition For A Murder" into a film. I should add, translating it into Hindi and then turning into a film. So, I have that going for me. Namaste.