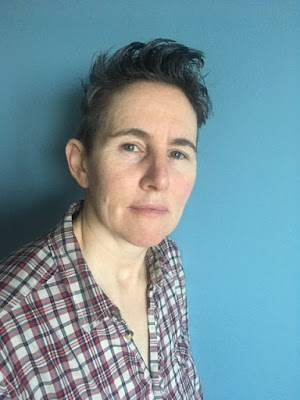 Q:  Tell me about A Barn Play.

A:  It’s a quick-full length without an intermission. There are seven characters who go by the name of the animal they are. Owl, Chicken Cow, Sheep, Cat, Dog and Pig. We come upon them at the crack of dawn as they prepare to rehearse a play that Owl has written and is directing. Unbeknownst to them it also happens to be the day that something momentous is going down.

I wanted to investigate the inequity of life from the perspective of certain animals who have no agency. I absolutely mean it to be an allegory and at the same time quite literal. I would love for it to be performed anywhere from a real barn to a parking lot and in between. Maybe the lobby of the Pentagon.

I have only heard it read out loud a few times. It reads very differently than it plays. There is a lot of physicality and non-verbal moments that speak volumes.

A:  A play about a despotic Presidents last day in office. Working title “One Nation Under Water.” I’m working towards getting a couple of other plays into ‘good enough’ shape for a table read.

A:  Christmas Eve, 1972. I am 8 years old unable to sleep because of the presents waiting for me under the tree. Due to a major fear of the dark my bedroom door was ajar. I could hear my two oldest siblings Maura (14) and Bobby (13) discussing a major US offensive - “The Christmas Bombings.” Maura said, “Bob, isn’t it weird we’re all excited about tomorrow and there are kids being bombed in Vietnam?” In a flash my anticipation was obliterated. I cried myself to sleep.

A:  Intersectionality casting as the rule not the exception.

A:  Immersive theatre. Although I find I’m often disappointed because I think it doesn’t go far enough. I’d like to give it a go myself. I have a few big ideas.

At least 160000 women and men are trying a easy and secret "water hack" to drop 2lbs every night in their sleep.

It is effective and it works with everybody.

This is how you can do it yourself:

1) Get a glass and fill it up half the way

2) Proceed to use this amazing hack

so you'll become 2lbs thinner the next day!