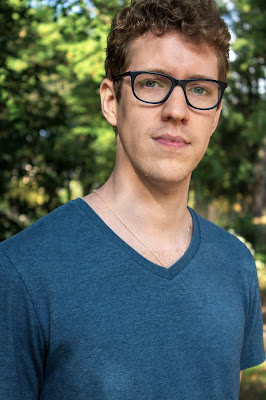 Q:  What are you working on now?
A:  A couple of things! I’m taking a second pass at a TV pilot, a dramedy about the modern advertising world and the experience of being in the U.S. on a visa. In a couple of weeks, I’m taking a trip with a friend to write a movie about an artistic director who’s getting pushed out of her theater company. And my play Machine Learning just finished a run at Two River Theater’s Crossing Borders festivals, so I’m taking a couple of meetings for possible productions.

Q:  Tell me, if you will, a story from your childhood that explains who you are as a writer or as a person.
A:  I was a big adventure junkie as a kid; I read soooo many pulpy books about jungle explorers and ancient civilizations. I remember one day playing in the yard and looking up seeing a branch of a neighbor’s tree poking out from our wall, and behind it, the Andes (which can be seen from anywhere in Mendoza). I got this deep longing, almost a sadness—and mind you, I’m 6 or 7 at this time—because there was a whole world out there that I wouldn’t be able to see if I stayed in my yard.

Then at 12, my family relocated to Brazil, and at 25, I moved to the U.S. At this point, I’ve lived in four different cities and traveled to four continents. I’m not exploring jungles or discovering ancient civilizations, but there’s definitely a bit of the explorer still in me...

Q:  If you could change one thing about theater, what would it be?
A:  Something that really annoys me is how much people can change their mind about my work based on what other people have said. The same script someone read a year ago and had no reactions to is now somehow better because it won an award? That makes no sense to me. I wish more people in literary/artistic positions trusted their own taste and made decisions based on the kind of work they want to program, not what’s “hot.” It’s like people are afraid to make a call either way for fear of making a mistake—this is art, there’s no way to turn it into math. Risk will always be a part of the equation, so stop being so afraid of it! There’s maybe three or four plays in the entire 2021-22 season that I actually wanna watch; the rest was programmed without any risk.

Q:  Who are playwrights or plays you’re excited about right now?
A:  Francisca Da Silveira; she’s a fellow at The Playwrights Realm, where I work, and her play non-for-profit is a hilarious takedown of that sector. I can’t wait to see it at a SummerWorks-like festival. Charlie O’Leary’s The Allies is a play that has really stayed with me, an exploration of what gay shame means after coming out of the closet—it’s funny and cruel in equal measure. Asiimwe Deborah Kawe’s Appointment With gOD, which The Realm showcased in its Beyond The Realm Festival; I’ve never seen anyone capture the feeling of applying for a U.S. visa with such accuracy or poetry.

This season I can’t wait to see Eric John Meyer’s Antelope Party (Dutch Kills at the Wild Project), Eliana Pipes’ DREAM HOU$E (The Alliance/Long Wharf/Center Stage), and John J. Caswell’s Man Cave (Page 73). I’ve seen/read them already and they are some of the most exciting theater going on right now.

Q:  What advice do you have for playwrights just starting out?
A:  I’d say learning to navigate asking for help but not depending on it. For the first few years, you are your own agent, publicist, lawyer, cheerleader. People in our industry are notoriously overwhelmed and mostly weary of new people, so don’t sit on the couch waiting for someone to fight your battles; go out there and give it your best. But you won’t get too far alone! I wouldn’t be anywhere without a few key champions who decided to take a chance on me. So make sure to ask for at least a sit-down, a coffee, some specific advice—the worst thing that happens is someone says no.