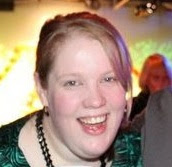 A:  I started DOG EAT DOG at a residency at Brooklyn Arts Exchange. I had the residency before I knew what I was going to write about, so about 2 weeks before a showing, I was flipping out because I had no idea what to write or what I wanted to say about anything. I had missed a bunch of marketing deadlines, and in a fit of guilt, I called Marya Warshaw, the Executive Director and was like, "HELPIHAVENOTHING" and she was like, find the scary place. What would you never tell you best friend? Now TELL EVERYONE. So that's DOG EAT DOG. It's a play about being fat. Because I am. It's part Neil LaBute rip, part mean afterschool special, part love story, part hungry. We don't serve snacks though, so bring your own.

A:  I'm writing a play that is called TOTALLY GIRLS. My friend Kara-Lynn gave me this idea to write a traditional teenagey coming of age story that ends up with everyone in a mental institution. And they might switch bodies too. But I want 30/40 somethings to play the girls.

I'm also writing a 3 act play that will be 60 minutes where there's a family and it's 3 different thanksgivings 20 years apart. The first line of each act is "I'm HOME!" and the last line is "another thanksgiving come and gone! Another Thanksgiving come. and. gone." There's an alcoholic Dad and a Mom who may or may not be bipolar. Lots of skeletons in the closet.

Also, I'm that girl. I just started a blog. It's called DID HE JUST CALL ME FAT? and it's not the story of my trip to Europe or what I ate for breakfast. It's just little dialogues I overhear around the city. I'm also learning to tweet. It's hard, but I'm improving, I think?

Q:  Tell me about your day job.

A:  Currently on the hunt for a day job. Preferably one that requires me to watch reality TV, talk on the phone, google people I know, and endlessly use facebook. If anyone has any leads, please let me know.

A:  I used to watch Mrs. Doubtfire on repeat. That's all you need to know about me. I feel like it contexts EVERYTHING.

A:  It would all be site specifically located in my living room, free, and not boring. And it wouldn't be rude to text during it. Like, no one would take that personally.

A:  I have never really done an interview where they asked this so is this might be stupid. Maybe. I'll risk it. But. Honestly, the people who inspire me most on a daily basis are my company members. They solve things I think are unsolvable. They make hard things easy. They make easy things more complex and interesting. I have made them do some of the craziest stuff. I've handed them a new scene or even act the day before a showing and they just MAKE IT HAPPEN. It's unreal. I honestly have no idea why they put up with me. I don't even bring snacks to rehearsal anymore. Adam Blodgett is always game. When others are skeptics, he's like "let's try it before we nay say." Ronan Babbitt is the epic jokester. If there's a stupidly hilarious gag, that was probably Ronan. If there's a skateboard, that's DEFINITELY Ronan. He always reminds me of what the audience wants, and he reminds me to put that first. Anna O'Donoghue is the smartest actress in the universe and possibly the most supportive person on the planet. She plays my evil women so beautifully. Tom Pecinka is so funny it hurts. And he can do anything. Just anything. If it's ridiculous, he can do it to a level beyond my wildest imaginings. Chris Geary is my rock in rehearsal. He's consistent, he's hilarious, he's easy to work with, and he taught me my favorite phrase of all time which is "deliver the pizza"...like if an actor is asking too many questions and I just need them to try it and stop asking me stuff, I say "can we just deliver the pizza and then figure it out". Amir Wachterman is the life blood of our work. He's been in almost everything I've ever directed in my life and he's my muse. If you know him, you know how funny he is. If you REALLY know him, you know how twisted he is, and if you REALLY REALLY know him, you know what a smart, hardworking, committed artist he is. Sometimes when something isn't working, I just look at him and he furrows his bald little brow and gives me all the answers. Other times he just goes out for a cigarette. Either way, he's essential. Also because he has the cigarettes. And I can't even talk about my designers. They are just...the sickest, most hilarious, most absurd people. Ryan Seelig does my lights and Chris Barlow does sound. My main goal in LIFE is to get them to laugh in rehearsal. Because they are the toughest critics. But you will never find two more talented evil geniuses in existence. And our design meetings are always less than 7 minutes. That's the shorthand. It's a beautiful thing. And when I remember that I have all these people supporting me, I'm ready to dig in and do more.

I also want to recognize some peers working in the theater right now who inspire me to go deeper and think harder. I love Leah Nanako Winkler and her work. (And her group Everywhere Theater-- formed with Lindsay Mack and Teddy Nicholas and Chase Voorhees). It's really ballsy and fresh and doesn't hold back. And it's SO funny. Hilary Bettis writes gritty, sexy, terrifying plays...she just writes one awesome play after the other. My dear friend Peter Gil-Sheridan has many plays that I adore, but his two most recent COCKFIGHT and RITU COMES HOME are so lovely and painful and full of his very specific humor. And he's got this play about Rafael Nadal that is going to blow everyone's mind when it's done. Joshua Conkel has every single one of his fingers on the pulse of everything I think about pop culture and why it's amazing and horrible. It's like he's reading the secret blog of my mind. Erin Markey BLEW MY GODDAMN MIND in May at Joe's Pub. She's a genius of epic proportions. John Early. Just. Everything he does. Why are his showgasm videos for Ars Nova so amazing? Stop it, John. STOP. And I have so many actors that give me a theater boner. I dream of a world where all plays star Michael Cyril Creighton, Becca Blackwell, Megan Hill, Geneva Carr, Eliza Bent...and on and on. This is embarrassing because some of the people on this list don't know I'm obsessed with them. But I am. Also, I left people out. Because there are SO MANY killer artists who inspire me to be better and not be lazy and rely on things that have already been done.

A:  I'm going to actually turn this question into a question for writers who aren't just starting out, since I sort of am just starting to make my own work. Every time I sit down to write I feel this wave of sickness and anxiety. Like, every other time I sat down to write and was able to, it must have been some weird fluke. And this time, my mind will be broken and I won't be able to make anything work. Is that normal? Will it ever go away? The only thing that helps me is playing the same episode of Dance Moms in the background and drinking red bull. Is there a healthier alternative? (Please don't say yoga. Just...I can't...)

A:  Come see Morgan Gould & Friends' DOG EAT DOG! It's August 1-4 at 7pm at HERE. Like MORGAN GOULD & FRIENDS on facebook. And check out our mission statement on youtube: http://www.youtube.com/watch?v=pGY4UDaR8Z8

If you're that type, you can also check out my blog: didhejustcallmefat.blogspot.com. Also, please watch the shows from the early 2000s KID NATION. It's on youtube. It doesn't help me, but you definitely should...it's the best reality show ever made.