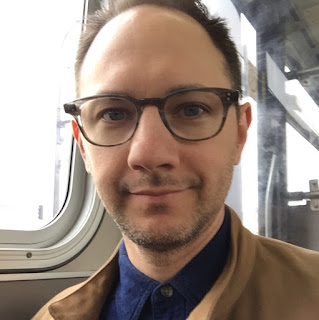 [Dean's Note: I've read Adam's blog for years and I always imagined that we would do this interview over coffee or steak dinner.]

[Adam's Note: We did this over email.]

Hometown: Columbia, SC. My folks were missionaries so I grew up in Indonesia, Mississippi, and Chicago, but the South is in my bones. South Carolina is a great state to be from. I'd highly recommend it.

Hometown Theatre: Trustus Theatre in Columbia gave me my first exposure to real theatre and my first opportunities as an artist. The vision of one couple - Jim and Kay Thigpen - to create a challenging and compassionate theatre, has been the breeding grounds for dozens of artists for more than 30 years.

A: My new play TOGETHER WE ARE MAKING A POEM IN HONOR OF LIFE opens at The Cafeteria at P.S. 142 / Amalia Castro Public School on the Lower East Side. The play follows a mother and father through a series of support group meetings for grieving parents over the course of many nights. We have set it in a middle school with a circle of chairs, and the audience becomes part of the group. What's exciting about this staging is that it's immersive but not interactive. Even when the lights are on, we can believe that we are there, sharing the experience of these characters as the grapple with their emotions and memories. The actors are so brave and the whole thing is really compelling to watch.

I recognize that this play came out of my experience as a father and how that completely changed my view on life. Events like Sandy Hook, and other tragedies closer to home, hit me in unexpected ways. I knew what those parents felt and I shared in their burden. And healing became a requirement - as a parent and as a partner. But how do you piece yourself back together, when you still have lunches to pack?

The play started out with 27 characters and it was trying to grapple with the breadth of grief that affected a community. I developed it with the Nashville Repertory Theatre's Ingram New Works Lab (plug below) as a playwright in residence, and through that time I narrowed the scope to focus on two characters. The shifts night to night with each "breath" make it a real journey - we have good days and bad days, and it doesn't always look like progress - but that's how healing occurs.

(I'll say also that there is a special joy in being a parent and a theatre artist. Somehow it elevates the urgency and sense of responsibility with which I pursue my art. But it also grounds me in reality. It's humbling to think that no matter where the play goes, it's possible that my son will read it in 20 or 30 years. Writing a letter to him becomes a vital act.)

A:  This last month I had a play produced at Mixed Blood Theatre in Minneapolis about Rwandan immigrants who want to get married in America. It's a love story, and working on it was a unique and rewarding process.

I'm also working on a play about a woman who tries to find the Nigerian school girls kidnapped in 2012. She has a vision from God telling her where the girls are and telling her to go get them.

And I have a play about a guy who wants to be a Samurai, but he's a dad in Brooklyn. It's a comedy, about raising kids and following your dreams, even if they're a few hundred years too late.

A:  I have to give thanks for the teachers that gave me the keys to the car: Jim Young and Mark Lewis at Wheaton College, and Norbert Leo Butz and Steven David Martin at Auburn University in Montgomery, AL. And in grad school at Carnegie Mellon, I had the privilege of studying with Milan Stitt and Rob Handel - old school and new - who each influenced thousands of others by their example. All of these folks helped me understand the connection between the art and the life of the spirit. That's what keeps me going. And now in the city I have found families and homes with Julian Sheppard, Bookshop Workshops, The Drawing Board, and The Somebodies.

A:  I've always been drawn to immersive work, in all its forms. There's some special magic when the actions that the actors are playing align with the desires of the characters (and the desires of the audience.) It doesn't have to be environmental even, but the whole room gets charged and we are in on the secret. As a playwright I put special emphasis on the story, so when that works to drive the overall event, then I have a good good night.

A:  TOGETHER WE ARE MAKING A POEM IN HONOR OF LIFE follows a couple through grief counseling sessions after their son was killed in a school tragedy. Audiences are invited to pull up a chair in the Cafeteria at P.S. 142 and sit with Rebecca (Allison Layman, Living On Love) and Brian (Michael Dempsey, Of Mice and Men, Reasons To Be Pretty, Three Days of Rain) as they remember and rebuild their lives. Directed by Mikhael T. Garver.

"Complete the circle in this beautiful portrait of grief and witness the power of humanity that keeps us together."

Also, the Nashville Repertory Theatre's very generous and supportive Ingram New Works Lab is accepting applications for next round. Go to: http://nashvillerep.org/ingram-new-works