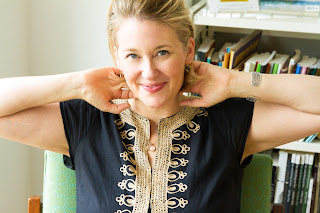 A:  I have two upcoming shows in New York City this fall.

“My Life As You,” a full-length romantic comedy, opening September 23rd at Shetler Studios and another short one-act called “Monster’s Ball” opens on October 6th as part of the Thalia Festival.

“My Life As You” is a psychological romantic comedy that centers around one woman’s journey of self-discovery. It’s set in Chicago in the late nineties. It’s fun and sexy. The two strong female lead characters dive into an intense battle to find something in this world that will ground them. It’s the big existential crises of being in your early twenties. Neither woman really knows who she is yet or what she wants. The women face this dilemma in charming and alarming ways. So in essence, it’s about that deep search we all go through. And on the simpler side, it’s about maneuvering through friendships, break ups and getting ahead in our careers. It’s really a survival booklet for your twenties.

This play was produced 10 years ago and I was surprised that it went over so well. We had sold-out shows and standing ovations. Obviously the subject of self-discovery is universally understood. We also had a remarkable cast: Kelli Porterfield, Ashley Wren Collins, Stuart Lopetan and Jeff Branson (who was on “All My Children” at the time). The play was directed by the fabulous Fritz Brekeller.

A:  I’m working on a play called “Reporter Girl.” It’s about the life of my maternal grandmother, Dale Messick, who created “Brenda Starr Reporter,” a popular comic strip that debuted in 1940 and lasted for over 70 years in print.

I also have a TV show in development.

A:  I grew up on a mountaintop that seemed like the middle of nowhere to me. My mom raised my brother and me as a single parent and she worked; so we were often home alone, especially in the summers and after school. The walk home from school after the bus dropped us off was a hot, uphill mile that occasionally put us in danger – a giant rattlesnake sunning itself in the middle of the road. Or the time the angry bull got through the fence, a bee sting, a dog attack, a fall into a blackberry bush, a terrible bike accident where a girl’s teeth got knocked out. It was bucolic.

In contrast to this country life, we annually visited my grandma Dale Messick who lived in Chicago in a fancy apartment overlooking Lake Michigan.

My granny Dale was wild and crazy. She wore purple stockings, lattice boots and had dyed red hair like her famous cartoon character “Brenda Starr.”

On one of our visits she took us for a walk down Michigan Ave and an entire block of Sax 5th Avenue was devoted to “Brenda Starr” couture. All the mannequins were dressed up like her characters and she designed all the fashions. She’d also let me rummage through her walk in closet there were boas, fur coats, all kinds of fancy hats and wigs. She’d dress me up and I loved it. On another visit she took me to the musical “Annie” and I was hooked.

As the writer I would become, I do notice my plays have a vintage and glamorous feel to them. There’s also a spooky and very quirky style to my work. I excel in dark humor and mystery. My plays are very unexpected. My plots are usually complicated and not always sane. My characters are outsiders trying to get somewhere. That makes a lot of sense, since so much of my youth was spent devising how I was going to get off the mountain and go somewhere and be someone, but…to where and be who?

A:  I wish it wasn’t so expensive to produce theater. It’s impossible to make any money back on the small projects. I see so many doors closing.

A:  Of course I’m a huge fan of some of the great playwrights: Shakespeare, Chekhov and O’Neill. But my real heroes are the theater people I’ve met along the way who have encouraged, mentored, embraced and/or enlightened me.

Le Wilhelm is high on my list for being my first New York City mentor. When I first got to New York I auditioned for him. And I handed him a play of mine to read. He cast me in his play, and the next day he said: “I read your play and I love it. Let’s do it.” Of course I had no idea that getting a play produced in New York wouldn’t always be that easy. He produced my first play and I’ll be forever grateful because it gave me so much confidence. Carolyn French from the Fifi Oscard Literary Agency mentored me as a junior agent while I worked there in graduate school. She had a great eye for talent and picking plays. She taught me how to work with writers and critique plays. Both Le and Carolyn are now gone and I miss them so much. Other heroes are some of the directors I’ve worked with: Fritz Brekeller, Ian Striker, Jeff Lewonczyk, Jamie Ramsburg and Erica Gould for being so good at what they do. I love meeting a director who is 110%. I thoroughly enjoy sharing a project and meeting really creative and inspiring people. This includes the set, lighting and sound designers who are so crafty. My biggest hero at the moment is Lin-Manuel Miranda for creating “Hamilton” and for giving us hope that theater is alive, spectacular and worth talking about.

A:  I really like unconventional plays; I love breaking into time and space. The play needs to be truly original in either concept or storytelling to pull me in.

I saw lots of theater this year (for the first time in ages). “O Earth” by Casey Llewellyn at Here Art Space stands out as my second favorite after “Hamilton.” “O Earth” was crazy, big, funny, unexpected and so smart. I love that the play deconstructed Thornton Wilder’s “Our Town.” Having the familiar story and characters gave me something to grasp, while the writer just took off in several dimensions. It was superb. And then there was “Hamilton.” I guess I am a sucker for history and “Hamilton” is such a New York experience. It’s historical, grand and beautiful, soft and poetic. It just reached in and stole my heart. I literally couldn’t stop smiling for days. I’m still smiling.

A:  See theater! Support your friends and colleagues by seeing their plays. Go to readings. Volunteer like you are drinking water. Do not make it just about you. Keep on writing and pushing yourself. Read. Work. Have a life. Get better. Learn to take criticism like a champ. Focus. Hang out with people who are better than you. Be kind. Whatever you do, do not get discouraged or bitter. There are ups and downs. Sometimes you’ll be up and sometimes you’ll be down, it’s part of the business. Wait for it, the up with come…

A:  Okay, my friends are doing gangbusters, so I have lots of plugs:

My play “Monster’s Ball” coming up in October with the Thaila Festival
http://www.eventbrite.com/o/the-thalia-festival-cast-c-10933301100?utm_campaign=thalia_festival_playwrights_ticket_info_comps&utm_medium=email&utm_source=newsletter&utm_term=2016-09-12

My friend Aurin Squire is writing for the show This Is Us which debuts tonight on NBC!

And finally my super talented friend Todd Komarniki wrote the screenplay for the movie “Sully.” To me “Sully” is an example of a well-written script in the hands of a masterful director (Clint Eastwood) and the film’s star seals the deal: Tom Hanks nails it. Go see it!

I also lika Hamilton by Miranda very much. Interesting interview, thanks! I advice to buy Hamilton tickets at hamiltontickets.org