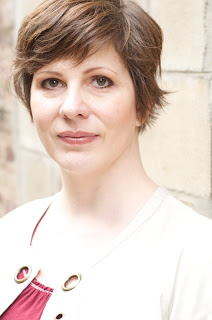 Q: Tell me a little, if you will, about your play going up in this summer's DC fringe.

A: I produced MAY 39th at DC Fringe in 2006, the first year there was a Fringe there. I wanted to write a play about how two people negotiate the emotional and physical give-and-take at the start of a relationship, so I set it the morning after a first date, 1,000 years in the future. After I wrote the play, I realized it was also about the ways we sometimes deliberately court pain. Last year I wrote a companion piece, MAY 40th, which is set in the same world, but with two new characters. These people are trying to figure out how to proceed after immeasurable damage has been done to one by the other.

Q: How much has it changed since its previous presentation?

A: I've never revised a play as much as I have MAY 39th. It was successful in '06, but I was never satisfied with it. Last year, Christy Denny, an up-and-coming director (she just AD'd David Adjmi's play "Stunning") asked if I wanted to do a pure workshop, with no goal in sight other than exploring the play. I know a lot of playwrights complain about being workshopped to death, but I had never had the chance, and I knew I was eager to pull the play apart and figure it out. It ended up having a reading at the Kennedy Center late last year, and people who had seen it in '06 couldn't tell what I had changed, when in fact I had completely torn it apart! I had cut a printout of the script into beats, and had laid it out on my bedroom floor, rearranging it to build a more deliberate arc into the play. Then I worked on the play further at a workshop that Electric Pear Productions gave me this spring here in NY. It's still the same story, with the same twist at the end, but it's been pared down to tell the story in what I hope is a much more compelling way. I cut a LOT of exposition and "future speak." It always feels good when you can cut a play down to the bones.

Q; Not that long ago you moved from the DC area to NYC. How has the move been? What do you notice most about the difference in day to day life in New York?

A: I. Love. NY. I love how the most intimate moments are lived in public here. DC was a great town to start writing plays in (I started there as an actor), but there kind of wasn't anything left for me there. I had self-produced three times in two years, and I'm sure I could have kept doing that, but eventually you want OTHER people to produce your plays. I had had a few commissions from smaller theaters, including two at Washington Shakespeare Company, a company I adore and who gave me complete freedom. Some of the larger theaters knew I existed, but there's that whole Backyard Syndrome, where you kind of have to go off and prove your mettle elsewhere for them to take a risk on you. I figured the time was right to try NY. I have a lot of non-theatre friends in NY, so I knew that even if nothing took off for me career-wise, I'd have a good time and enjoy consuming theater, if not making it. It's funny, people say it's so brave to move to NY, but really there's nothing to lose. I wasn't earning enough to live on as a teaching artist in DC, so it's not like I left some great money job. I've been very lucky so far. I landed a job in Social Media at NBC, which I'm very grateful for. I also volunteered to read scripts for Jesse Berger at Red Bull Theater, because we had known each other back in DC years before, and he made me Literary Manager. It's been helpful to be affiliated with such a respected outfit as Red Bull, and reading so many scripts is also helping me grow as a playwright. I highly recommend volunteering as a script-reader if you are a playwright! There's something so invigorating about pulling up stakes--it's a chance to find new approaches to the goals that are most important to you. I know it's stretched me in ways I can't even put into words. I'm enjoying seeing theater and meeting people as I try to find the places where my work might make sense. People have been very welcoming. I love it here!

Q: If I was moving to DC, what theaters would you recommend I check out?

A; DC is great because there's something for everyone on the menu. At any given time there are something like 65 theatres in town. When I was there, I sought out work at smaller venues, like Solas Nua, Longacre Lea, Rorschach and the now-NYC-based Project Y, but I also loved going to Woolly Mammoth and Theater J. I also deeply love classical plays, so The Shakespeare Theatre Company, Washington Stage Guild, and Washington Shakespeare Company were also favorites of mine.

Q; What kind of theater excites you?

A: Oooh I love the dark stuff. I love plays that explore issues rigorously, refusing to reduce complexities to black-and-white. I can't stand plays that co-opt stories of "other" simply to assuage liberal guilt--that kind of self-loathing is so boring. It's dishonest to present a marginalized demographic as if it were no more than a tool for arty self-flagellation. Give me something difficult, something muddy and bloody and emotionally terrifying, that asks questions that make people uncomfortable. I'm hungry for that.

A: I (gulp) am working on a solo piece with music that a friend from Minneapolis and I are planning on taking on the Fringe circuit next summer. She plays banjo. I started working on it in a two-day workshop at LAByrinth last year, and I'm really excited and really terrified, which is of course the best place to be! This character is hugely pregnant, but her husband has now left her. He was kidnapped and tortured abroad (nothing noble--a case of mistaken identity), and she's in the middle of converting to Judaism and finishing a ridiculously useless PhD. So how does she go on, how does she make sense of all this? She basically tries and fails to superimpose meaning on all this chaos. But there's this baby, this future, right there inside of her.

A: Read plays. Watch plays. Learn as much as you can about what's going on in the world. Find ways to contribute to your community. Ask questions. Don't be afraid to fail. You have to do something badly before you can do it well. Don't take the good reviews too seriously, because then you have to take the bad ones seriously, too.

Q: Link please for people who want to come see your show in DC.

Callie, I been trying to contact you. We met 2 years ago at Kingsburrough College in BKLN. Odds are you cant remember me. I found my short play you had us write in Class. Contact me if you get this. Adam?- Help me out bro' PCAPPADORA@GMAIL.COM Thanks dude.Callie, TTYS! - Phil Cappadora`