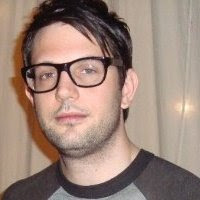 Hometown: I'm originally from Kentucky, but my dad joined the Navy so we moved around a lot. I'll say Hansville, WA, a teensy-tiny town across the Puget Sound from Seattle. That's where we ended up and where I spent most of my formative years.

Q: Tell me about your play coming up, MilkMilkLemonade. What is it about and who is the artistic team?

A: In the abstract, MilkMilkLemonade started as an experiment in memory. It's like a collage of images, ideas, and memories (many of which are completely false) from my childhood. I'm interested in they ways in which our memories are misleading or completely false. I wanted to write a play about growing up queer that takes place in a nightmare landscape that expresses how terrifying life can be for gay kids in an expressive, rather than strictly literal way It's also an exploration of how our bodies change, how they limit us or trap us, and whether or not we even have control over them. That's all pretentious gobbledy-goo though, because MilkMilkLemonade is a comedy about an effeminate little boy named Emory who lives alone on a farm with his sick grandmother. His only friend is a chicken named Linda and together they dream of auditioning for the televised talent show, Reach for the Stars. On the day that Emory's grandmother forces him to give up his favorite doll, Linda is to be "processed" and Emory has to figure out how to save her. Obviously, many things get in the way, not the least of which is Elliot, an 11-year-old pyromaniac and semi-rapist who lives down the road. It's very funny and dark and sort of melancholy. It's children's theater for grown-ups. Also, there's dancing! We have an amazing artistic Team for this one. Isaac Butler is directing. I'd read his blog, but had never worked with him. He's so warm and confident, which nicely sets off my crippling insecurities. It's also nice to work with somebody who is so much smarter than you are. I reccomend it. In the cast we have Jennifer Harder, who has become the Laura Dern to my David Lynch or the Mink Stole to my John Waters over the past five years. She plays Linda the Chicken. My good friend Nikole Beckwith, a Youngblood playwright as well as a performer with the Story Pirates, plays a "Lady in a Leotard". Jess Barbagallo, another playwright/actor, is another newbie to The Management and has worked with Ontological a lot. She plays elliot, the little boy from down the road. Andy Phelan, who is incredibly sweet and talented and was just in The Chimes by Kevin Christopher Snipes, takes the lead as Emory. It's impossible not to fall in love with Andy when you watch him work. Lastly, we have the hilarious Michael Cyril Creighton, who has his own web series called Jack in a Box and was one of the hosts of VH1's Best Night Ever. He plays Nanna. All amazing.

Q: Tell me about your company The Management. How long have you guys been around?

A: The Management started in 2004 as part of the UnConvention Festival, which was a response to the Republican National Convention that was being held in New York. I took over as Artistic Director in 2005 and we've had residency with Horse Trade Theater Group for two years now. Basically, we favor new plays that explore contemporary American life. We like plays that are unpretentious, young, and bold.

A: I'm writing a comedy sopa opera entitled Sinking Hearts. It's about Navy wives. Misty and Crystal are both housewives (played by drag queens, obviously) on Thomas Hartman High Security Submarine Base somewhere in rural Washington State. There's a malevolent force in the old woods that surround their houses and it takes Misty and Crystal on a strange journey. It's Desperate Housewives meets Twin Peaks. It's really fun to write, because I get to mess with genres, which I love. It's also fun to write for the same characters for a long time and watch them change and grow. Who knows how and when it'll be produced. What a logistical nightmare!

Q: Tell me a story from your childhood that explains who you are as a person or as a writer.

A: I was a very shy and meloncholy child. Like now, I prefered my own company to the company of others. I used to pretend I was a horse. I'd spend hours in my front yard galloping and neighing. All by myself. God knows what the neighbors thought. When I was a teenager my mom and I were having a late night heart to heart wherein a lot of family secrets were finally coming out. It was my moment. I finally had the courage to bring up a subject nobody had ever discussed out loud; why my family really left Kentucky. I was two or so. My Granny owned a beauty shop at the bottom of our apartment building and cut all of our hair. I very clearly remember her giving me a perm. Why a grown woman would give a toddler a perm, let alone a male toddler, I have no idea. I remember running out to the front of the building as the school bus carrying my brother and sister and the other big kids arrived. I was excited to show off my new do. Then Robbie, a slightly older boy who lived upstairs from me and teased me mercilessly, started making fun of it and saying that perms were for girls etc. I have no idea what happened, but I completely lost it and smashed a bottle over this poor kid's head and he fell to the ground. The last thing I remember is kids shouting and my mom and Granny running toward me from the shop. So I'm up late with my mom years later and I'm crying and finally getting this off my chest. I felt like I was a monster. Why did nobody ever bring up the fact that I killed another kid when I was little? It had tormented me for years. Well, apparently nobody ever talked about it because it never happened. All that guilt and torment for nothing. My mom looked at me like I was insane. "are you kidding?" she said. "You never had a perm." I suppose it was all a dream.

A: Well, I love plays that aren't boring. Honestly, my taste runs the gamut, but I like work that is accessible (which is not to say dumbed down). I don't like feeing like I'm just pounding my head against a wall of "art", you know? Also, I like plays that are a little raw and a lot bold. I admire cheekiness. Also, aesthetics go a long, long way for me. Even a fringe show that costs nothing can have an aesthetic to it. I like style.

A: I'm just starting out myself and sometimes it seems to me that the answer to this question should be "have rich parents" or "go to Yale" but I'm trying not to be cynical. I think support is great. Join a writing group. Youngblood has been one of the best things that's happened to me. An artisitic home helps too, so I'd suggest starting a theater company with like minded actors, directors, writers etc. Lastly, be as critical of your own work as you can stand. That way, by the time it's produced you can advocate for it. Always fight for your work. Be your own advocate, because nobody else will. Fight, fight, fight! You can get tickets here: http://www.smarttix.com/show.aspx?showcode=MIL6 It runs Sept 10-26
Posted by Adam Szymkowicz at 8/30/2009 10:07:00 AM