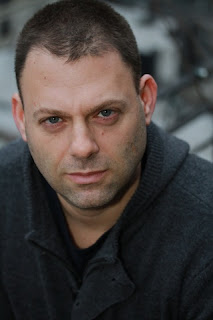 
Q:  Tell me please about your play now being performed at the Old Globe.

A:  The play that was at the Old Globe is called “Alive and Well” and is a two-character comedy about a Civil War re-enactor and a Reporter who get lost in the Virginia wilderness together while looking for The Lonesome Soldier – a Confederate Soldier that some locals have sighted and believe to be the real deal… It’s ultimately about America’s love/hate romance with itself. It had its premiere this past fall (Sept 09) at the Virginia Stage Company, who originally commissioned and developed the play.


Q:  What else are you working on?

A:  In July, my new play “Penelope, of Ithaca” is going to open at the Hangar Theatre in Ithaca, NY which has been my artistic home away from home for the last 10 years. They are opening their brand new theatre this summer and “Penelope” will be the first new play in the space.


In June I’m going to go out to Steamboat Springs, Colorado with the Atlantic Theatre Company to workshop my play “I Don’t Want to Talk About It”.


I’m also in the midst of a rewrite of a commission for commercial producer Matt Murphy.


And finally I’m working with this very cool theatre company – Operating Theatre – on a production of my play “Transatlantica” (which was done at the Flea in 2002) for October in the city.

A:  Growing up there was this bully on my block named Billy and he used to come over to my house, like once a week to beat the hell out of me.


The first few times he beat me up, I tried to fight back to get him to stop but I didn’t really know how to fight back - I never learned to fight. I think probably my Dad tried to teach me but I was stubborn and refused to learn…


And then one afternoon I was watching “Facts of Life” (my favorite TV show growing up, except maybe for “Diff’rent Strokes”, “The Great Space Coaster”, “Small Wonder”, “The Love Boat”, “Fantasy Island”, “Dynasty”, “It’s a Living” and “Maud”) and Blair’s cousin Jerry, (remember her? She was the one that had cerebral palsy) came on the show and she was wearing that famous t-shirt – “I’m not drunk, I have cerebral palsy” and that somehow made me think of me and Billy and I thought that if I laughed while Billy was whaling on me maybe that would do the trick (now I wonder how I possibly came to this conclusion and I also wonder if this somehow connects to my love of really rough sex…but I think that’s probably a subject for another kind of interview at another time…or maybe not…anyone reading this that wants to discuss rough sex and where the desire for it comes from, feel free to get in contact).


The next time Billy came by to beat me up, I tried my laughing tactic and it totally freaked him out. I remember him stopping his assault and looking at me with a real sense of curiosity…like what strange creature is this?


Billy never came by to beat me up again…and I missed him.

A:  I have this kind of ridiculous idea that theatre artists should have these cards that are given out by a “Committee” that tells them how much time they are allowed to use on stage. Every theatre artist starts out with 10 minutes of stage time at the beginning of their career and each year they are evaluated and given more or less time depending on how they used the time they had allotted. If they were able to fill the 10 minutes completely, then they could move on to 15 minutes and so on and so on. Sometimes artists would be required to go back to smaller amounts of time if they abused the amount of time they had. Sometimes artists could advocate for more time but they’d have to prove that the time was really needed. This idea of course brings up a whole bunch of problems and questions – but I feel like I go see shows all the time that are 15-20-25 minutes too long and I think – “if the Committee had given them less time, this play would have been fantastic!”

A:  In no particular order:

Cherry Jones in “The Heiress”

And everyone else in the Good Writer’s Group

Prince – but not now, back in like the pre and post “Purple Rain” time, probably up to around 1990…

Jason Schuler and the Operating Theatre

A:  I’m pretty open as far as style/type…I just need my theatre to be passionate, true, daring and as lean as possible without losing the juicy parts.


I was most recently excited by the Orphan Home Cycle and Keen Company’s production of “I Never Sang for my Father”.

1. Make your writing your first priority and figure the rest out as you go.

3. Don’t worry about the order of things until the very last minute

2. Take your time getting an agent.