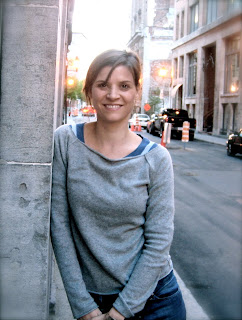 Q:  Tell me about The Electric Baby.

A:  The play follows a group of fractured souls who, after a young man is killed in a car accident, are brought together to care for a magical dying baby. It's about the stories we create for our lives in order to find meaning in tragedy. As each character comes in contact with the baby, they begin to recreate themselves. I use traditional African and Romanian folklore, as well as my own invented modern folk tales, to explain the circumstances of the strange baby that mysteriously glows in the dark. As in a fairy tale, the characters connect with an unquestioned immediacy, they make mistakes, they reach clarity. Did I mention there's a baby that glows in the dark?

A:  There will be developmental reading of The Electric Baby at The Working Theater on May 24th, directed by Daniella Topol. In June, I will be in D.C. to workshop The Electric Baby in the First Light Discovery Program at Theater of the First Amendment. I'm revising Colony Collapse, a play set on a California almond farm against phenomenon of the disappearing bees, a young girl disappears. I'm also starting work on a new comedy, as well as a TV pilot I've had in the back of my mind for a while now.

A:  I'm the youngest of six. For the most part, my home was filled with immense humor and love, but there was also mental illness, alcoholism, drug addiction, as well as my mom's battle with cancer for 13 years before she died; the basic 1970s domestic potpourri. When I was very little, there were times that we would be called out of bed in the middle of the night and made to participate in a terrifying kind of kangaroo court. Sometimes my mother would announce that she was leaving, and we would beg her to stay. Sometimes we were made to "testify" against one of our siblings. The next day everything would return to normal, and no one would talk about it.

Years later I asked my brother, who is ten years older than me, about those nights. He said, "I was a teenager, so I saw the drinks being poured at dinner and knew what we were in store for. Since you were so young, it must've been scary not to know where it was coming from." It was, and thankfully at some point it stopped. Elements of those nights inhabit my writing: themes of despair and redemption; forceful anger erupting out of some seemingly minor moments; bad language; cutting humor; children in peril; and the circus atmosphere of madness. At least, that's what my husband says!

A:  I'd get rid of the sexism and the ageism that playwrights face. The idea that the next great play can only come from a 25-year-old male baffles me. Why? In fact, we could solve a host of problems by producing the work of a greater diversity of emerging playwrights.

A:  One of my first acting jobs in New York was in the original Off-Broadway production of Charles Mee's Orestes. It was directed by Tina Landau and was produced by En Garde Arts, a company that used to produce site-specific plays in fabulous abandoned spaces all over Manhattan (probably all luxury condos by now). This show turned everything I knew about theater on its ear and made it exciting again. We performed on the waterfront at West 59th Street where the iron frame of a Parthenon-shaped pier tilted and fell into the Hudson. Jefferson Mays, who played Orestes, climbed the frail structure every night and somehow managed to avoid getting tetanus.

I came in late, so my first day of rehearsal was on day two of a Viewpoints workshop. I didn't actually know what we were doing, yet I loved it and viscerally it made complete sense. There were 30 or so actors in the show, and there were rewrites, rainstorms, and technical glitches…yet everyone had a great time, including the audience. It was an extraordinary collaboration. At the time I didn't know I would ever find myself a playwright, but I remember inspiring conversations I had with Chuck about his approach to writing. I was in awe of Tina's vision, humor, and humble leadership. Anne Hamburger had an amazing ability to make things happen. For those reasons and this amazing experience, Chuck, Tina, and Anne are my heroes.

A:  I'm excited by plays that really use the medium of theater, pushing the bounds of realism through language or the physical elements of storytelling. Jason Grote's 1001 did that for me. Something that can only happen live. As an audience member, I like being caught off-guard. But I also love plain old good acting and well-crafted plays of any kind.

A:  Write and be generous with your peers.

I also suggest becoming familiar with Liz Lerman's Critical Response Format (http://www.facebook.com/l/ccfeb;www.danceexchange.org/performance/criticalresponse.html). Use it when responding to the work of others, and insist people use it during talk-backs about your work. It will allow you to see your work objectively and help silence the disruptive types who can ruin a feedback session.

Also, seek out directors at all levels whose work you admire. You want to have people whose taste and vision you trust bringing your plays to life. Directors can help get your work read by the right people and, ultimately, produced.

A:  167 Tongues at Jackson Rep. It runs through May 28th. I was one of the contributing writers on this project and it was an amazing collaborative experience.
http://www.facebook.com/l/ccfeb;www.jacksonrep.org/JacksonRepertoryTheatre.html

If you're in D.C. on June 12th at 3 pm, please come see The Electric Baby at Theater of the First Amendment. It will be directed by the talented Jessica Lefkow, and it's free!
http://www.facebook.com/l/ccfeb;www.theaterofthefirstamendment.org/events.php

I've also been following The Civilian's, You Better Sit Down — Tales from my Parents Divorce on Brian Lehrer. The submitted stories are great.
Posted by Adam Szymkowicz at 5/25/2010 09:15:00 AM

Congrats! I just stopped by because I knew the blog was something new and most blogger has been posting about it. All this information look great and it'd be nice if you can add more about the same topic but with different mentions. 23jj

Well, if 'Viagra Online Pharmacy' likes it, that's good enough for me! Congrats indeed to Stefanie Zadravec-- I'm unfamiliar with your work, but I love what you are saying. I'd really like to read 'The Electric Baby.' It sounds very interesting! I'm working on a new play about women in the military, and I just submitted a stage adaptation of 'The Awakening' to the O'Neill conference. I'm wondering if Stefanie has ever written a solo play and how she found the experience different than writing a multi-actor piece? -- L Morton