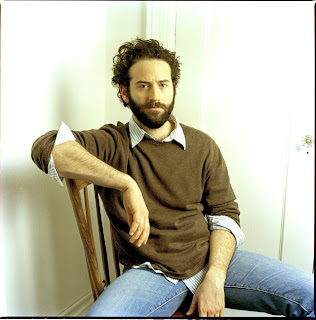 Current Town: Los Angeles. Though my wife (actor and writer Jessica St. Clair) and I are in NYC a lot too.

Q:  Tell me about The Angel in the Trees:

A:  It’s a ghost story, or a series of ghost stories, an hour-long monologue spoken by a woman from New York recently transplanted to a small town in the south.

A:  I just got back from teaching playwriting with Beth Henley at the Sewanee Writers’ Conference in Sewanee, TN. And I’m working on my new play, The Body of an American, which was the 2009-2010 McKnight National Residency and Commission through The Playwrights’ Center, where I’m a Core Writer. It’s a play about journalist Paul Watson, who won the Pulitzer Prize in 1994 for his photograph of a fallen American soldier being dragged through the streets of Mogadishu. The play’s had some additional support from Sundance and TCG which helped me spend some time with Paul in the Canadian Arctic this winter, where he was taking a break from war reporting for a time and covering the “Arctic and aboriginal beat.” He’s now back in Afghanistan.

I’m also getting ready to premier my play The Three Christs of Ypsilanti at Black Dahlia Theatre in L.A. this winter, with Michael John Garcés directing. It’s an adaptation of a nonfiction book of the same title, about three schizophrenic men who thought they were Jesus Christ and the doctor who tried to change their minds (by getting them all together in group therapy for two years). I’m adapting this play as an opera too, with composer Jonathan Berger. We just premiered a song cycle inspired by The Three Christs of Ypsilanti, entitled Theotokia (Hymn to the Mother of God), at the Spoleto Festival USA with Dawn Upshaw singing. You can hear a recording of her performance here: https://ccrma.stanford.edu/~brg/theotokia/

And I’m writing poetry, which is what I tend to do when I’m not writing plays.

A:  I suppose it was reading Waiting for Godot at twelve and thinking, This is just like my family! I had a similar reaction at around the same age while reading Anne Sexton. Writing for me became a way to reach out past solitude, and theatre is perhaps the most extreme gesture of this kind.

A:  Better education and exposure to theatre, so that the adult audience could be much, much wider. It’s such a relatively narrow field, which limits terribly the aesthetic and expression of theatre.

A:  Charles Mee, who I studied with at Brown. Wallace Shawn’s plays have been important to me. Many Irish playwrights, and not necessarily the most well known (I lived for a while in Ireland, in Cork and Galway, and the experience was hugely formative for me). British theatre of the ’70s and ’80s. The short stories of William Trevor, the poetry of Czeslaw Milosz and Robert Hass. So many contemporary playwrights today—anyone who feels compelled to devote their lives to this art form, despite its humiliations, large and small.

A:  I like challenging work, plays that ring a loud, large bell and ask difficult questions of the audience. I’m drawn to the strange, because I think the truth about life is most often hidden from us, and when we catch glimpses of the truth it will and should strike us as strange and wonderful and awful. (The best comedies, in my opinion, are as disturbing as good drama.) I like mess with a hidden craft to it. And despite all the difficulties of challenging work, I want to tell stories. I still believe in character and story.

A:  I don’t know, just to write write write, and send send send. To cast a wide net, as fearlessly as you can—it’s the only way to discover your artistic peers, and of course you need them, because we can’t do any of this alone.

A:  Jessica Dickey is doing a beautiful job with The Angel in the Trees, as is director Mark Armstrong and his team of designers. Please come see the play at Manhattan Theatre Source this weekend.
Posted by Adam Szymkowicz at 7/28/2010 08:44:00 AM

Articles are meaningful, and your blog is nice!