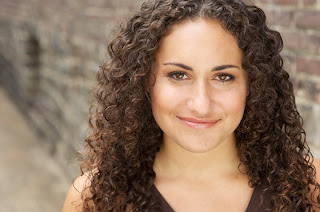 A:  PINK! is the story of five 12-year old girls and the interpersonal relationships that bind them. It plays out in real-time over the course of an hour and a half while they are alone in their bunk at sleep-away camp. A dark, dark comedy, PINK! presents 12 year-old girls in a way you’ve probably never seen them-- as themselves, unsupervised and unleashed. Take note: animals in their natural habitat can be extremely dangerous.

Originally a ten-minute play, PINK! was first produced at Tufts University, later announced a finalist at The Tank Theater’s SLAM playwriting competition, and then produced at Manhattan Repertory Theatre. Its full-length version, produced by Down Payment Productions at the WorkShop Theater (www.pinktheplay.com), was a finalist for the Lark Play Development Center’s Playwrights Week 2009, and received seven NY Innovative Theatre Nominations, including Outstanding Full Length Script.

I was incredibly fortunate to have worked with such ridiculously talented artists on every aspect of the production. Directed by the brilliant, brilliant Brian Smith and acted by the most outstanding ensemble-- Kaela Crawford, Julia Giolzetti, Caitlin Mehner, Alison Scaramella, & Stephanie Strohm – I really had it good. Real good.

PINK! will be published by Broadway Play Publishing at the end of the summer / early fall. I also adapted the script for film, and as a screenplay, PINK! is currently being optioned as an independent feature film.

A:  As far as playwriting goes, I’m working on a variety of projects:
1. Attempting to secure the rights to adapt my favorite novel into a rock musical.
2. Putting the final touches on my children’s musical, Hank & Gretchen: A Modern Re-telling of Hansel & Gretel; or Because Candy is That Good, collaborating with composer Mark T. Evans, as well as Rag n’ Bone Theatre Company.
3. Working on my screenplay, Lady & the Vamp, for a Columbia MFA student short film being produced by Yves Bouzaglo at the end of the summer.
4. Writing showcase scenes for MFA / BFA programs around the country.
5. Diving into my next full-length play, THE RUBBER ROOM.
6. Developing a short one-woman play with my puppet, Swaby.

And outside of writing:
Currently coordinating and running a day camp. They are giving me a week at the end of August to develop and direct an Adventure Camp. I have 75 k-6th grade kids enrolled. Goal: make it the best camp ever. Go.

I also just graduated from Columbia University with a MFA in Acting. So, acting. Just finished a reading of Daniella Shoshan’s exciting new play, YES WE CAN, at Atlantic Theater Company. And singing. Love to sing. And running obsessively through Central Park. Or to New Jersey. Love to run.

A:  When I was 11 years-old, I was at sleep-away camp (are you sensing a theme?) and decided, per usual, I was going to stay back in the bunk that night while all the other girls were socializing with the boys so that I could write. At this point, I was walking the line between popular and being the weird kid. When my friends got back to the bunk, I shared with them my very long poem that described, in unnecessary, bloody detail, the murder of a camper by a counselor in the middle of the night. I think after that I was the weird kid.

A:  I wrote my first play immediately after being introduced to Sarah Kane’s work. Her writing is beautifully sick, full of humor and wit, with layers upon layers of crazy shit. She goes there.

A:  If I am emotionally invested, and I mean choked-up, heart-pounding, tears-rolling, ear-to-ear smiling, involuntarily-mumbling-praises-under-my-breath-like-my-disruptive-yet-fantastic-grandma invested, I know it’s a good show.

Also, if I laugh a lot. If I laugh a little, it’s probably not too special; I’m a laugher.

A really, really good musical.
Anything with children.

A:  This is the advice I remind myself to take, because I too am just starting out:
-Try to sleep but not if it interferes with writing.
-Submit, submit, submit.
-Collaborate with talented friends if you’ve got em. Embrace their feedback.
-Explore: rejuvenate yourself by seeing, reading, breathing new works.
-Make time that doesn’t exist.
Posted by Adam Szymkowicz at 8/04/2010 02:13:00 PM