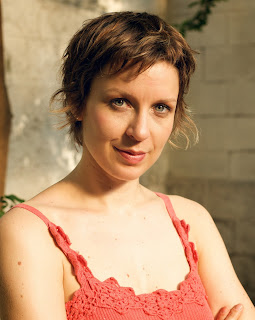 A:  Too many things at once, including writing a TV series with my friend Georgia Clark called On This Side (a drama set in Brooklyn about a group of late 20/early 30-somethings trying to be adults), also writing an eternal screenplay and a play that I just started working on at the Erik Ehn silent retreat that’s set in a small dusty Australian town populated by - yes, I am going to say this and destroy my attempt to rid American’s minds of an Aussie cliché - crocodiles.

Q:  Tell me about the Women's Project Playwrights Lab.

A:  It’s a 2 year lab to support playwrights. I haven’t started the lab yet but it seems like a totally kick arse, invaluable resource for female playwrights. We also get to connect with female producers and directors through those labs that run simultaneously.

A:  I think writing stuff down is a kind of compulsion that starts pretty early on in life. As a kid, I often used to stay at my grandparents house on the weekends – and I’d spend the whole time in the backyard reading or writing and drawing in a big scrapbook, it was really my favourite thing to do. I composed some genius poetry, which I discovered recently and read to my Mum. For some reason she was laughing a lot. My grandparents bookshelves were stocked with all my Mum’s old English girls' boarding school books about playing lacrosse and having midnight feasts. Totally outdated and completely irrelevant to my life but for some reason, I devoured them. So I think writing and reading was and always will be a complete escape from reality – a daydream of being somewhere/someone else. Writers are just kids who get to keep playing out these fantasy games in their head and putting them down on paper, all the while pretending to the world that we’re adults and passing it off as a profession.

A:  That it’s more rigorous and more spectacular – in the same breath, so they’re one thing really.

A:  Harold Pinter (I’m sad I never got to meet him), Caryll Churchill, Tennessee Williams, Wallace Shawn, Anne Bogart, Sam Shephard, Sarah Ruhl, Margaret Cameron (Aussie writer/director/performer) and too many others to name…

A:  Theatre that takes stamina. Theatre that is visually stunning. Theatre that uses words economically but poetically. I remember seeing Chuck Mee’s Iphigenia 2.0 at Signature Theater a few years back and the actors were literally running up the walls and breathing in sync. At the end of the show people were standing up out of their chairs and weeping (OK, maybe that was just me). But I think that is what theatre should be – enough of all this sedentary sitting around in the living room talking. Actors should kick arse – they should be gods. And writers (myself included) and directors should work to eliminate mediocrity in our work.

A:  Read a lot. Write a lot. Write a lot of terrible, terrible plays. I keep re-reading these Tennessee Williams essays – and this was a guy who had great success and great failure all in one lifetime - and the fact is, he just didn’t stop writing for his whole life. Even when he was accused of being what he called “a ghost of a playwright.” He wrote and wrote and wrote – some of it was embarrassingly bad. The more you write, the better you’ll get and maybe the closer you’ll get to saying what you want to say. I need to take my own advice and go write now.

A:  May Adrales and I have been working on a play I wrote called Deathless – about living forever in a world that’s falling apart – that we plan to have a workshop of in the coming months at IRT (stay tuned).