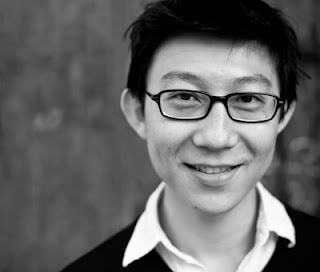 Q: Tell me about disOriented.

A:  "disOriented" is a play about a Korean-American family stuck in between cultures, and a freak accident that forces Ju Yeon to leave her family in New York and go back home to Seoul. The play is based on true stories about my family's experience living in Chile, which I've transposed to contemporary times in Flushing, Queens to talk about my own experience immigrating to the States. I began writing this play in 2007 at the Royal Court Theater's Young Writer's Programme, and after 3 years of development, primarily in New York, "disOriented" is being produced by Theater C at the Peter Jay Sharp Theatre on 42nd Street. "disOriented" is directed by the formidable Carlos Armesto, without whom I wouldn't have written this play, and  features Ariel Estrada, Daniel K. Isaac, Talym Jinn Kim, Julian Leong, Bert Matias, Amy Kim Washke, Virginia Wing, and contemporary, Korean fan dancing performed by Yanghee Lee.

Q:  What's your collaboration like with Carlos and Theater C?

A:  Carlos and I met through Youngblood back in 2005 and we’ve been working on “disOriented” since 2007. I'm excited about working with him because he’s been there for me since the play’s first reading at the Ma-Yi Theater's LabFest II. There were times in which I really wanted to give up and stop working on the play, and Carlos was the one that encouraged me to keep going and make of this play an act of truth-telling.

Over the years, we’ve developed a strong friendship and partnership. I feel that for both of us “disOriented” is a culmination of a journey we’ve taken together as artists. For me, this is my first, full-length production of an original play in New York since 2005 and for him, it’s his New York, directorial debut as Artistic Director of his new company, Theater C.

What excites me about our work at this point, is seeing how open Carlos is in his collaboration with the cast and creative team. He creates a really open space for everyone to be part of the process. It's fun to watch him work--he really goes for it and knows how to get everyone involved in the rehearsal room. And his work is gorgeous. He'll make of "disOriented" an event I couldn't even imagine and that's a real treat.

A:  I'm currently in my second year at Columbia's MFA program in playwriting and working on several scripts at the same time. My most immediate project, following "disOriented," is a workshop production of HEARTBREAK/INDIA, which I've been writing since 2006. HEARTBREAK/INDIA is based on my time studying Peace and Global Governance at Kyung Hee University's Graduate Institute of Peace Studies in South Korea, and it's about my personal search for both inner and social peace. The play is set in the United Nations and the story follows Rajiv, an Indian-American UN Diplomat negotiating a Global, Non-Violence Peace Resolution through the UN's Security Council. The play explores how international diplomacy works at a political level and through dance, examines power dynamics and international affairs from a more intimate and spiritual point-of-view. This workshop will present my fifth, page-one rewrite of the play, and I'm excited to see what will happen once we get it on its feet.

A:  I grew up in a traditional Korean household in Santiago, Chile and went to an American/International school. I was raised speaking Korean, Spanish, and English and lived in an environment that was very diverse and extremely privileged. Most of my friends' parents worked for international organizations, foreign governments, or multi-national corporations, and most of my classmates came and went after three/four years. As a kid, I didn't know what to make of that and I was pretty confused. I used to cry, not be able to bond, and hid behind bushes because there were bullies. Theater helped me make friends, taught me how to speak up, and do all the social things I never really learned how to do as a kid. Now, I continue doing theater by writing plays about international politics from a multi-cultural point of view, because it's pretty much the only way I know how to understand what my childhood was all about...

A:  I think it'd be awesome to find a way to support continuous, long-term collaborations among artists. It's really hard to find environments in which a writer, director, actors, and designers can develop a new piece from beginning to end. And though I recognize that some plays may take years to write, I think that playwrights could work better if the support structure was there. By keeping artists together and providing means to sustain a long-term, creative process, artistic discussions could go deeper and theater could, perhaps, respond more proactively to our changing times. While other mediums, including film and TV, have found ways to keep up with the advent of new technologies and evolve as an industry, I think theater has not yet found a way to take advantage of these new tools to have a larger impact in social discourse.

A:  I love theater that is immediate and raw. I love hearing a playwright's voice and see the actors perform both with visceral physicality and emotionally from their bones. I love the hybridization of theater with different art forms and the creation of a theatrical event, rather than an entertaining spectacle. I love theater that dares, that is risky and provocative, and that makes me see how it can be done another way. I love theater that obsesses over words because I think most of the times language fails us, and I find it both tragic and comic to be a playwright.

A:  The best way I learned how to write plays was by watching other writers work. From 2003-2005, I worked at the Lark as the company's Development Associate and saw emerging, established, and foreign writers develop their work. I learned from these writers, and the Lark staff, how to be persistent, truthful, and clear about the stories I was trying to tell.

I've also been fortunate to be part of EST's Youngblood and the Ma-Yi Writer's Lab since 2004, and during this time I've been able to see incredibly, talented writers hone their voice and completely fallen in love with their sensibilities and concerns as writers. I'd encourage everyone to get involved with writers in their own communities and find the ones who create plays that resonate with them. Seeing a new writer's work that you love is like discovering a new band and listening to an awesome album you've never heard of. With time, I think that relationship between a writer and his/her audience only deepens and becomes more rewarding. In cities like New York, there are just so many gifted writers doing work, I think it's a privilege to have such abundance and a shame when not all of us get an equal shot to be heard.

Lastly, I think playwriting is a life-long endeavor and early on, I found it best to face what I didn't know, muster the courage to be honest about it, and take risks to find answers. The biggest lessons I've learned have not been in school, but from practical experiences while working in the theater and experiential lessons I've received while taking time off from writing, to travel and live in different countries and different cultures. Returning to New York to focus on my plays, I realize that there is no one way to make theater, as there is no one way to live, and writing has become a way to continue asking questions, big and small, and make of my career a journey of self-discovery, social engagement, and meaningful, personal growth in the company of many other people, that are just trying to figure out what the hell is going on.

Thank you, that was extremely valuable.