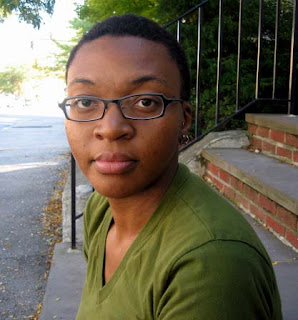 Q: Tell me about your new play for one actor, HOLLOW ROOTS.

A: It's a solo piece about a young Black American woman who becomes obsessed with discovering a post-race society. The term “post-race” being a concept that caught momentum in mainstream America during Obama’s presidential campaign. The definition is two-fold: 1) Race no longer impedes a person’s ability to succeed in this country and 2) Our nation is color-blind—we don’t see race. Considering the possibility of such a society, my immediate questions are: what would we gain in such a world and what would we lose? I started writing HOLLOW ROOTS with those questions swirling in my head. Stylistically, Spalding Gray and Wallace Shawn’s theatrical presentation influenced this piece. The play is entirely direct address and the performer remains seated throughout.

Q: How is it similar to your other work? Different?

A: Well, it’s similar in that it examines a slice of Black American culture. And, like my other plays, it explores a heightened language and theatricality. The difference … hm. Probably the visual aspect. In my mind I just see a Black woman sitting in a chair, speaking to the audience. Creating that type of theater is new for me.

A: I love the fact that adults are willing to pretend for 90 minutes. I love the magic of it. The simplicity of it. It has the power to transform the viewer. It celebrates the dexterity of a good performer. It captures the brilliance of a great storyteller. It creates community. It sparks discussion. These things don’t happen with every theater piece, but the possibility is always there.

A: I hate it’s so expensive to make and it costs so much to see. But I also realize the folks behind the scenes deserve to get paid.

Q: What advice do you have for playwrights starting out?

A:  Write, write then write some more. Challenge yourself with each play. Read any and everything. But try to get some exercise and fresh air, too.

A:  My play BLACKTOP SKY is a part of the 2011 Carlotta Festival at The Yale School of Drama. May 6-14th. My wonderful classmates Meg Miroshnik and Dipika Guha are also featured. More info: http://drama.yale.edu/carlotta/index.html

she is on of the most beautiful black American woman that I have ever seen in my life!