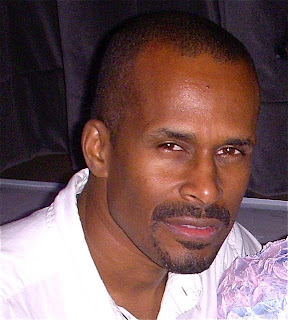 Hometown: the suburbs of Cincinnati, Ohio

A:  Currently, I'm in rewrites for a play called The Final Days of Negro-ville. A darkly humorous play that examines our current recession and its impact on middle class "black America". Think Our Town meets Osage County meets a black middle class community falling apart at the seams. The play was commissioned by A.C.T. and the Hansberry Project in Seattle and I'm prepping for a July 2011 workshop. I'm also in rewrites for a play called Sugar and Needles. The play, also dark and humorous, (I obviously enjoy dark and humorous), digs into the lives of two recovering substance abusers and the woman who knocks on their door with a bag of coke (among other things). The play was inspired by the life of my oldest brother, a witty, charming, very smart man, who died in September 2010 from complications due to a lifetime of substance abuse. Sugar and Needles was commissioned by Epic Theater and will appear in their Sunshine Series, June 2011.

Q:  Tell me about The New Black Fest.

A:  The New Black Fest is a theater festival that celebrates the diverse voices, music and narratives within the global black theater canon. It is a means to challenge black theater artists and the larger theater community to think about "blackness" in a much more expansive way. It is a creative supplement to what appears to be a "whitening" of American theater. (Let's count how many plays of color were produced in this off-Broadway season). My maternal grandfather was a leader in the Cincinnati chapter of the NAACP. My paternal grandfather, a minister, was very good friends with the Civil Rights leader Reverend Fred Shuttlesworth. Both of these men demonstrated if you see a void, do whatever you can to fill that void, explain later. At the end of the day, J. Holtham and I like to believe The New Black Fest is our way to provide opportunities and legitimacy to theater artists of color who spend most of their careers stuck in that stagnant waiting game.

A:  In the 1970s, a major Born Again movement swept through southern Indiana and southern Ohio. Families that had been historically Methodist and/or Catholic (my family) suddenly subscribed to the notion Christ would return, very very soon and with a vengeance. For me, it was like an alien invasion. Everyone morphed from humans to these three-eyed Born Again creepy things. People started using this Born Again language, performing Born Again rituals, viciously ostracizing non-Born Agains. I thought my identity (one that was beginning to take shape) would be absorbed by the Born Agains. I remember, as a kid, thinking this is the end of personal choice. I told my mom (who never subscribed to the Born Again crazy) about my concerns. I remember her laughing a little and then providing these words of encouragement: "Yes, we're surrounded by a lot of non-thinkers, Keith. It's horrible. Grow up and leave this hellhole." Or something like that. I'm not sure if this is why I write, but it's certainly why I set out, at a young age, to find an environment where I could thrive as an individual and make up my own rules. Now that I think of it, writing is my way of making up my own rules.

Q:  If you could change one thing about theater what would it be?

A:  Mmm... but there are so many things to change. lol. I would challenge the theater community to really be the social/cultural barometer of our nation. Literature, photography, dance, visual art and music, boldly and courageously give testament to the truth of our times. And I'm talking about the main-stream stuff. However, theater, particularly off-Broadway and the regionals, appear a little afraid to challenge their audiences with the ugly (and beautiful) truth of who and how we are. There are, of course, many exceptions, but I'd like to challenge American theater, on the whole, to be much more daring (and to please stop singling out "black plays" as these things to do during February). Every play, no matter who wrote it, is an universal story.

A:  Theater that holds no punches.

Q:  What kind of advice do you have for playwrights starting out?

A:  Go see every play within a ten-mile radius. Absorb the physics of a production. Listen to how language unfolds from an actor. The study of playwriting never ends. There's always room to get better. Also, don't judge other writers. Content may be challenging, but craft is craft. You could find fault in anything (and someone could certainly find fault in your work as well). Last, but not least, establish a community of fellow theater artists. Read your own work, PRODUCE your own work. Nurture and nourish each other. Don't wait for anything. In the words of Judy Dench as the character Barb in the film Notes on a Scandal, "Do, do, do!"
Posted by Adam Szymkowicz at 4/16/2011 12:13:00 PM