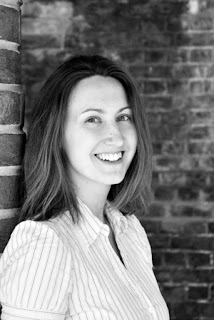 Hometown: Newton, MA. When I was a kid I heard somewhere that Newton was home to 5% of the nation's psychiatrists, I don't know if that was true, but it was a fun fact at the time.

A:  A few things. I'm in the last week of preparing for my play The Tutor, which is about an SAT tutor who sells her used underwear online. It'll be performed in the New York Fringe Festival between August 12th and 20th. The NyLon Fusion Writers Collective, my writers group, is collaborating with a group of actors on a piece that has taken many forms. At one point it was about American expats living in London, now we're taking a more abstract approach and working on the idea of "home." That will be performed in November at the Gene Frankel. And I'm working on a play about a British doctor named J Alison Glover, who was an unsung public health hero in the early 20th century. It's about his work, how it relates to us today, the role of doctors and patients in medical decision making. But it's also a bit of a war epic. Like War Horse meets Wit.

Q:  How does English theater compare to American theater?

A:  Oh, this is a tricky one. Theatre is part of the general culture of England in a way that it isn't really in America (I think Jez Butterworth's play Jerusalem captures that very well). It's also part of their tourism in a way that it isn't here. People go to London to see plays, they don't do that in New York quite the same way. English theatre is also heavily subsidized (though some of that is changing), so there are more opportunities to take risks. Even commercial theater over there tends to be riskier, less family friendly. They had to change the whole arc of Priscilla Queen of the Desert to make it more "family friendly" on Broadway. Plays also don't get as bogged down in development hell the way they do here. If you have a show at an Off-West End or fringe theatre in London you can get 4 or 5 different reviews of it in national newspapers, that doesn't happen anywhere in America. I think institutions like the National Theatre and the Royal Court are absolutely integral to the success of English theatre (and American theatre if you look at how many of their shows eventually transfer) and those theaters have more than one show going on all year round. Rocco Landesman said recently that there was more supply than demand in American theater and a lot of us took offense to that. They don't seem to care about that in London. When I started my MA at Goldsmiths College, we read an article by Mark Ravenhill that said that American playwrights know that no one cares about them, but that English playwrights are deluded to think that people still do. I think embracing that delusion is key for survival. And somehow demanding to be relevant.

Q:  How does your dramaturgy affect your playwriting and vice-versa.

A:  I think I see dramaturgy and playwriting as one and the same. I love the research element of writing plays, it's how I satisfy my latent history nerd. I also love really taking apart plays and thinking about how they work structurally. My Goldsmiths classmates and I would sit around in the pub after class talking about how to fix our plays. Even three pints in sometimes, we would still be dramaturging one another's plays. I think it's a really important skill for playwrights to have. I also think that the definition of dramaturg can be be as narrow or as broad as you want it to be.

Q:  How did you end up writing headlines for the Onion?

A:  I was an Editorial and Sports Intern there my first year out of college. I got the job because I knew a lot about the Dartmouth hockey team and the guy interviewing me had grown up in Hanover (where Dartmouth is). We agreed that one player was totally overrated and a guy I was friends with was underrated (for the record, we were right, my friend's still playing in the NHL and the other guy ended up being a bit of a bust). After a month or so of sitting in on writers meetings I was allowed to pitch some sports headlines. One of them, about the Duke lacrosse team scandal, was totally unintentionally disgusting. And they just ran with it. I was also featured in a photograph as a girl who ate too much Valentine's day candy and was dumped by her boyfriend as a result.

A:  Music was really important in the Newton Public School system. In 3rd grade, we played the recorder, in 4th grade we got to pick our own instrument to play. I had already been playing the piano, but decided for my "4th grade instrument" I wanted to play either the oboe or the French horn, knowing that these were historically the hardest instruments to learn how to play. I ended up playing the oboe for about 4 years before giving it up to spend more time doing theater and playing sports. Now I look back at that and laugh at this innate desire to challenge myself. It's why I stuck it out on the crew team for four years in college and it's why I'm a playwright. And it certainly informs the type of work that I aim to create.

A:  I would love it if there were a way for ticket prices to be lower so that more theatre could be accessible to a wider range of people. Anything to get people off of their laptops and into a space with living breathing people!

A:  I feel incredibly indebted to Caryl Churchill. I find her work incredibly inspiring and beautiful. Tom Stoppard is another, so much so that when I met him in an airport in Spain I sent him a thank you note for being nice to me. I'm in awe of Sarah Ruhl's industriousness and brilliance. I like JT Rogers' dedication to epic theatre about ideas that are as gripping as Bond movies. I love Tarell Alvin McCraney use of language, there's a moment in The Brothers Size that gives me chills just thinking about it. I'm so glad Taylor Mac's work is getting a larger audience, he breaks my heart and entertains me at the same time. Nick Hern is a theatrical hero for publishing some amazing plays that would otherwise never be in print and for giving me the opportunity to stay in London for an extra 2 years when I otherwise would have been lost. The people at the New York Theatre Workshop for their dedication to taking theatrical risks. Oh and Mark Rylance, except I wish he weren't an anti-Stratfordian, that bothers me.

A:  Theatre that consciously breaks rules and entertains me at the same time. A great production of a play I've read but never seen. I love any play with drag queens (and have a kernel of an idea for a drag musical of my own, stay tuned). And most importantly, theatre that surprises me. One of the burdens of being a playwright/dramaturg is being able to predict the ending of a play. I love being pleasantly surprised at the end of a play.

A:  See everything you can. Read everything you can. Write as often as you can, but don't beat yourself up about it. Intern with companies you respect, usher at theatres, Make friends with people who share your aesthetic and create plays with them. Maintain friends who don't do theatre. Join a writers group. Don't worry about readjusting your definition of success as time goes on. Learn how to badger and hustle. Bask in the wonderful absurdity of your decision to be a playwright.

A:  The Tutor is at the Living Theater in the New York Fringe, August 12-20th (http://www.fringenyc.org/basic_page.php?ltr=T#TheTut) The NyLon piece in November at the Gene Frankel is tentatively titled Spoken For, but may change, keep a look out for that. Come say hi at the Drama Book Shop but if you would prefer to follow my occasional musings online, you can check out my website katemulley.com.
Posted by Adam Szymkowicz at 8/04/2011 11:04:00 AM