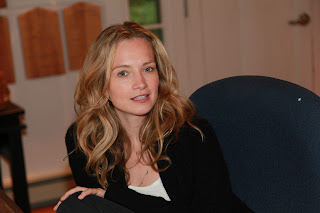 Current town:  Right now I'm in Williamstown, MA, but I'm based in NYC, with frequent trips to LA.

A:  In the past few weeks, I've been in rehearsals for my play, TOUCH(ED) at the Williamstown Theater Festival, rewriting and tweaking a lot.  I'm also currently writing the book for PRETTY FILTHY, a new musical, with the composer/lyricist Michael Friedman about the adult entertainment industry.  It's a commission from Center Theater Group and The Civilians.  Finally, because even playwrights need to make a living, I'm writing a feature for Paramount Pictures based on the bestselling book series, THE LUXE, and will be developing TV  for CBS this fall.

Q:  How does your acting inform your playwriting and vice versa?

A:  I actually first started playwriting while I was getting my MFA in acting.  There was a little student-run space called The Cabaret, and I began writing plays for my actor classmates and producing them in the theater there.  (The Cabaret also served booze, which probably helped those first plays go down easier...)  Wanting to create great parts for actors was the initial spark that made me start writing. Nothing pleases me more than seeing an actor find a way to be great, with the help of words I've written.

On a deeper level, what draws me to writing is the same thing that drew me to acting-- it's all about character.  In both art forms, I hope to get inside characters and create living, breathing people.  I try to write parts that actors will want to play, and lines that I think would be fun to say.  What I've had to subsequently learn, as a writer, is how to be in charge, critical and decisive.  As an actor, you're trained to be continually open and pliable, to "always say yes."  As a playwright, you have to be able to articulate a clear vision and must stay in control of the story that is being told.  You have to be willing-- and able-- to say no.

Q:  Tell me a story from your childhood that explains who you are as a writer or a person:

A:  This is really the defining story of my life, and it's a simple one:  When I was about four or five years old, I went to a summer camp with swimming classes.  There was an Olympic sized pool, with a very high diving board-- it seemed like it was ten miles up in the air.  The swimming teacher marched all the campers up the diving board ladder and stood us on the platform, asking who wanted to jump first.  Nobody ever had before.  It was absolutely terrifying.  We all stood there shivering in our swimsuits, as one boy after another walked to the edge, then balked and turned around.  Suddenly-- I still don't know exactly why-- I stepped forward.  This was completely out of character for me,  a shy, chubby, awkward bookworm, always picked last for every team.  But somehow, in that moment, I realized that all I needed to do was step off the edge, and gravity would do the rest.  I also knew I had to do it or I would regret it forever.  And so, I walked to the edge, and jumped.  It was probably the bravest moment of my life-- which I guess is a bit sad, really!--  but I still think about it every time I do a play.

Q:  Who are or were your theatrical heroes:

A:  Well, I have to go for the obvious-- Shakespeare.  I took a class Freshman year in college with the amazing Shakespeare scholar, Marjorie Garber.  We read all the plays and the experience pretty much changed my life in every way.  It was like a religious conversion-- I still look to Shakespeare for lessons in drama and in life.  The moment at the end of Twelfth Night when Viola, in the hope of finding her lost brother,  exclaims, "Prove true, imagination, O, prove true!" for me speaks to what we're always trying to accomplish in theater:  to take something imagined and make it feel true.  I think about that line all the time, as a silent prayer.  And his characters-- Lady M, Caliban, Brutus, Hermione, Mercutio, I could go on forever-- they are the bravest, most complicated and heartbreaking and sexy and fascinating group of people I could possibly imagine.

Of course, in terms of modern playwrights-- there are so many I adore.  Tony Kushner.  Stephen Adly Guirgis.  Paula Vogel.  And actors like Janet McTeer, whose Nora in A Doll's House is etched in my mind.  Simon Russel Beale whose Iago I'll never forget.  Mark Rylance who blows me to bits every time I see him on stage.  I'm also lucky enough to have some amazing writer, director and actor friends who have mentored me, reading drafts after draft of my work and giving advice:  Keith Bunin, Itamar Moses, Trip Cullman, Chuck Morey, Susan Pourfar.  I learned from them that writing doesn't have to be lonely and solitary-- it takes a lot of support.  I could never write without their help.

Q:  What kind of theater excites you:

A:  I'm attracted to theater that's language driven-- theater that feels excessive and messy and generous, where words flow freely.  I love the musicality of language, and I love people and characters who can't shut up. I get an almost physical thrill from hearing talking-- language that hits me hard, in the gut, and feels visceral and chewy and delicious.  I love sloppy words.  I myself can't shut up about them right now... But okay, okay, I will.  I'm done.  Really.  Okay.  Now.  Done.

Q:  What advice do you have for playwrights just starting out:

A:  Find actors you love and bribe them with snacks or beer to read your work out loud.  There is no substitute for hearing your work, even if it's just in your own living room.  Chose subject matter that feels important to you, and stick with it even when it feels crappy.  I heard the amazing Ira Glass speak once about how there's this gap, when you're first starting out, between what you would LIKE to have made, and what you actually did make.  His advice?  To make a ton of work, and eventually your product will catch up with your taste, and the gap between what you are making and what you want to make will close.

Finally, I'd say you have to find a way to enjoy the process as much as the result, because you never know what the result will be.  A playwright friend once told me that you have to look at each step in the process-- from the first draft on-- as if it's the last one, and derive full satisfaction from it.    Because if you're waiting for some magical pot of gold at the end of the rainbow... Well, you miss the rainbow, which is the best part.

Cool article, I took some real photos on the pool of a hotel at midnight with some friends of mine, and it look more awesome under the moon reflection.