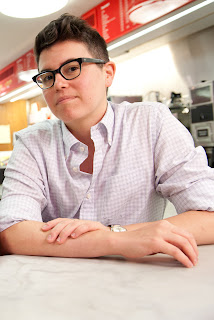 Q:  Tell me about Nightlands.

A:  NIGHTLANDS is the story of two women, a working-class Jewish housewife and an African-American astrologer, whose unlikely bond is tested on the eve of Philadelphia’s 1964 riots. It’s highly fictionalized and stylized but based on the story of how my grandmother learned astrology – she actually studied in the 1970s – but it was still somewhat scandalous. She went on to have her own radio show and teach a bunch of people who are still practicing writing horoscopes for newspapers and such. She made a set of teach-yourself-astrology instructional tapes (soundtrack: “Neptune, the mystic” from Gustav Holst’s The Planets) and sent all her grandchildren astrology tapes on our birthdays – telling us about the months ahead. She’d say amazing things like “make sure no one is trying to hoodwink you.” One or two of her lines made it into the play.

Her teacher was a brilliant woman with expertise in all manner of spiritual subjects including Kabbalah. As part of her apprenticeship, my grandmother would drive her teacher to these astrology conferences in Atlantic City. Can you imagine the sea air, the deep talk. That scene’s for the film adaptation if I could be so lucky.

In writing the play I wrestled a lot with how, as a white writer, to tell this story in its period, with all its taboos, racial strife, and repression, while creating nuanced and complex characters. I spent a lot of time thinking about framing and historical inaccuracy because I was less interested in portraying repressed states than in dramatizing their upheaval.

The production I’m building with Tamilla Woodard, our designers, and New Georges has a feeling of suspending the characters in space and time. It’s set in “a memory of North Philadelphia,” so there’s that sense of that one chair from your grandparents’ house, it’s nubby fabric, and not the whole house. That one radio. Her skirt. Sound and light refract as if reaching us across generations.

A:  A new play called PROFANITY. I put some of the process images up on my new site (sylvanoswald.com) even though the play is still in the works. It’s about some real estate agents in Philadelphia in the 1950s who are selling land that doesn’t exist. It’s based in part on my shyster great uncles and the neighborhood where my mom grew up, the Logan section of Philadelphia, where all the houses sank into the ground. It’s the last play in my mysteries trilogy with SUN RA and NIGHTLANDS. I’ve been doing all this thinking about self-fashioned spiritualities and how they can be alternately nationalistic, violent, or queer.

I’m also working on a music-theater piece called ZOETROPE with Alec Duffy and Mimi Lien. It’s a song cycle about the increasing boundarylessness of our lives as the realization continues to dawn on most of the country that being an imperial power may be a bad idea – and of course the searchability of all our selves online contributes to this feeling of privacy and sovreignty turned inside out. Living rooms appear in offices, kitchens appear outside, groups of people sleep in the same bed. It’s a cast of seven people, a range of ages, races and ethnicities, and genders. They sing tuneful songs that, if you listen closely, don’t quite make sense. Kind of Gertrude Stein meets musical theater. We’re inspired by Robert Ashley, Meredith Monk, and Einstein on the Beach.

Also, I wrote a very dark and strange play during a recent silent retreat led by Erik Ehn and the Pataphysics crew down in Texas. It was 107 degrees most days.

Q:  Tell me about Play A Journal of Plays.

A:  Jordan Harrison and I started PLAY A JOURNAL OF PLAYS in grad school at Brown in part to process all the incredible experimental writing we were encountering. The other part was suddenly realizing that as emerging artists we were in this awkward bottom-of-the-totem-pole position where we had to ask for things and send away by mail and wait to be anointed or something and that just wasn’t going to be very satisfying or pro-active. Completely out of our control. So we wanted to emerge with an offering of sorts. We wanted to emerge participating, contributing. Already giving.

The chap is absolutely just, and there is no question.