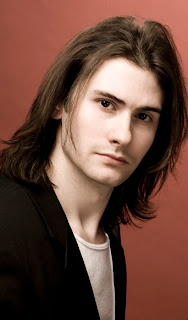 Q:  Tell me about the Dreams of the Clockmaker.

A:  Dreams of the Clockmaker is an unusual piece and not your typical one-woman show, particularly in terms of its scope, mood, and tonal shifts. We follow our enigmatic lady on a stage as she regales us with troubling visions of a dystopian future, enacts a low-rent 80’s magic show, and bewilders us with Dust Bowl occultism while reliving her captivity in the stately mansion of a master manipulator known only as “The Clockmaker.”

A:  I’m looking to mount a full production of another mysterious, otherworldly play of mine called Laurie Deacon and the Night Caller, and I am in the process of writing a new one, which may or may not involve time travel and 13th Century monks. I have several films in the works including a neighborly revenge flick called Slumlord Shitheel Slaughter, an ode to watery beer and urban archaeology called Puttin’ on the Schlitz, and a freakish tale of puppetry and class warfare (set in a cesspool) called Fresh Piss.

Q:  How does filmmaking inform your playwriting and vice-versa?

A:  My plays often come across as cinematic, from the perspective of sound (I always do my own sound design) to visual elements. For example, in my play Aenigma, I envisioned (and director Rachel Klein effectuated) the playback of a blackmailed videocassette, complete with actors rewinding and fast-forwarding and simulating tape anomalies. In terms of my plays informing my films, I often make silent films which require a very particular form of theatricality, and I’ve recently moved toward puppetry and set-building, occasionally on a miniature scale.

A:  Since I was a boy, I’ve been a careful observer of the miniature comedies and tragedies that play out between the lines in our day-to-day lives, and there’s a certain amount of material that naturally flows from these observations. I remember when I was five or six, a nearby city park would have “goldfish days” whereupon a wading pool would be filled with goldfish, and excitable youngsters armed with tupperware and plastic bags would paddle in pursuit of that simple joy of cradling something alive in their hands. I didn’t participate, because my family wouldn’t acquiesce to a pet, goldfish or not, so I simply watched. After some time had passed and the kiddie frenzy had abated, I remained. In their wake, the children (guided only by momentary euphoria and not with any ill intent) had left behind hundreds of squished and trampled goldfish, grotesque and oozing. I felt a profound despair. I looked around, and no one seemed to notice. I didn’t shake the sensation for days.

On a lighter note but in a similar vein, some years later at Halloween time, our elementary school cafeteria offered Vampire Popsicles with a jet-black exterior and a runny, sticky “blood” interior. Designed to appeal to “kids who love gross things,” they fell flat amongst the student body because they were simply too gross. I envisioned a whole storyline that there was some young, enterprising lunch lady who’d put her ass on the line, arguing in that theoretical cafeteria board room (in the midst of boring Fla-Vor-Ice hardliners!) that the kids would really enjoy the change of pace. To make a long story short, eight months later, at the hottest, balmiest Field Day in memory, the unused Vampire Pops were rolled out at the end of the day as the only means of refreshment for an army of sweat-soaked, severely exhausted youth. The children, myself included, tore into the Vampire Pops with horrifying voracity, turning our mouths inky-black and inadvertently covering our bodies with goopy blood sauce. Even calling it 'goopy' or “gooey” insinuates more rigidity than it deserved. As soon as you hit the center, it was like you were holding a wine bottle upside down above your face and pulled out the cork. If you weren't prepared, your face, hands, and shirt would be showered in sticky, viscous, bloody fluid. It was ludicrous– they might as well have handed us squirt guns filled with maple syrup! We resembled the aftermath of a massacre. The Vampire Pops had transformed a grueling, mandatory school activity into a stunning vision of gory, apocalyptic chaos, and I delighted in it. I’m unsure if others saw the full extent of the situation’s absurdity, but I was happy to take a step back and chronicle the miniature comedy.


A:  Gone are the halcyon days of profound pageantry and breathtaking spectacle, of cramming seven hundred dancers and cigarette-smoking extras and dangerous, deranged animals onto one rickety stage. Or maybe they never happened. Perhaps it’s merely the fever-dream of an audience member who’s seen too many Busby Berkeley numbers and Cecil B. DeMille epics. Anyway, at Broadway prices, I basically want to be seeing the Sack of Rome or the last days of Pompeii.

A:  This is a tough one, and there’s so many to list, so let’s say Euripides, Eugene O’Neill, Antonin Artaud, Yukio Mishima, David Mamet, Ellen Stewart, and Julian Beck. And though it’s technically not “theater” in the purest sense, the teleplays of Rod Serling. And as long as we’re going that far– hell, the Grand Guignol splendors of Alice Cooper live!

A:  Surround yourself with friends and collaborators who excite you, whom you trust completely, and whose company you enjoy; people who aren’t afraid to be brutally honest, yet are willing to give you the benefit of the doubt as you bounce your loopier ideas off of one another. Cultivate other interests, savor your free time, and don’t let your day job(s) get the best of you.

A:  Well, of course, there’s my show Dreams of the Clockmaker http://vimeo.com/27958787, which runs from October 17-30th at the Wild Project, but I would also sincerely recommend Rachel Klein’s morbid fantasia The Tragedy of Maria Macabre http://vimeo.com/28088659 (for which I did the sound design), which runs semi-concurrently with Clockmaker at the Wild Project from October 20th-30th.
Posted by Adam Szymkowicz at 10/15/2011 11:17:00 AM