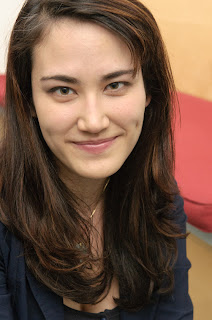 Q:  Tell me about your show at Clubbed Thumb.

A:  Takarazuka!!! is set in the Takarazuka Women’s Revue in Japan, where women perform all roles in lavish Broadway style musicals.

I was inspired to write this play after watching an interview of a Takarazuka “male star.” She explained, “I always dreamed of joining Takarazuka. I never imagined what would happen when the dream would end.”

After hearing this woman's bittersweet interview, I began to research Takarazuka. I became obsessed with the lurid, surreal, and oddly compelling performances. I was introduced to the strange ritual of forced retirement that these actresses undergo, a tradition unique to the Takarazuka Revue. This play is my imagining of what happens when “the dream ended.”

A:  At the moment, I’m developing The Underneath (a commission from Kumu Kahua) with Rising Circle. The Underneath is a story about Col, a young man who returns home to Hawaii after receiving a mysterious SOS note from his estranged brother, whom Col had left behind. When Col returns home, nothing is the way he remembers and Honolulu becomes a dark and unfamiliar backdrop. Although this play is stylized and draws from film noir, particularly The Third Man, The Underneath is a very personal play for me that explores complicated emotions I have about leaving home and living abroad.

I’m also working on a play called Murdo at the Public’s Emerging Writers Group. Murdo is about hoarding as well as the exodus of a small town in South Dakota. The play focuses on Paul, a Desert Storm Vet, now a hoarder and possibly the town’s final resident, and Paul’s hyper-sexualized eleven-year-old daughter, Bitna. I’m really excited about Bitna. I had forgotten how terrifying eleven-year-old girls can be. Even though I’m from Hawai‘i, my father is from the Midwest. This is the first time I’m exploring that landscape.

In addition, I’m developing a few short films and working on my first musical with Michael McQuilken.

A:  There is no explanation for me. But here's a story.

When I was five-years-old, I was lost for hours in a Beijing market. There were stalls displaying pigs’ heads and innards, live turtles, and chickens. I was pushed to the ground by the shouting, jostling crowd. A tall stranger grabbed me by my wrist and lifted me into the air. He said, "Do you know what happens to little girls who run away from their mothers? Their eyes are gouged out and their hands and feet cut off. Then they are shipped to Malaysia to beg and they never see their families again."

I was pretty sure this was my fate until my mother ran up to me. Turns out this charming man was a business associate of my mother's, who was irritated to have been asked to look for me. The fear that I would be kidnapped, disfigured, and sent to an unfamiliar place haunted me for years. I will never forget that man’s face or the smells and sights of the market. I want audience to feel vulnerable and engaged while sitting in the theatre. I want my plays to terrify and overwhelm, but also be funny.

A:  I wish it was easier to convince people to see plays. People will shell out money to go to a concert but balk at $20 theater tickets. A bad play is far more torturous than any film could ever be. But a good play can change your life.

A:  My mentors are Paula Vogel, John Guare, and Jose Rivera (they are also my heroes). My heroes also include Gabriel Garcia Lorca, David Lynch, Caryl Churchill, Witold Gombrowicz, and Charles Ludlam.

And if I can be old-school about this…Euripides. Even thousands of years later, his plays still feel shockingly modern. I also appreciate a controversial playwright. Euripides was controversial in life and in death. While in exile, it was said he was either killed by his rival’s hunting dogs or torn apart by women. That’s living life with the same intensity as your art.

A:  I like spectacle and seeing how magic is created in small spaces with tiny budgets. I’m drawn to impossible plays, awkwardness, and stories in which anything can happen at any moment.

That said there’s no one particular kind of style that I favor over the other. I think certain theater-makers create work that challenges their audience and demands to be seen.

A:  I think every playwright should read Jose Rivera's 36 Assumptions.

I also received this piece of advice from Martin Epstein. His advice stuck with me because I received it at a time when I was questioning whether or not I should continue playwriting.

“If you haven't already begun, read. Cannibalize the classics and track down great plays of the present moment—discover what 'great' means, but never imitate until you've absorbed the influence in ways to stimulate your own take on things. And see as many plays as you can afford until you can't stand it. It's best to see amazing plays and terrible plays.”