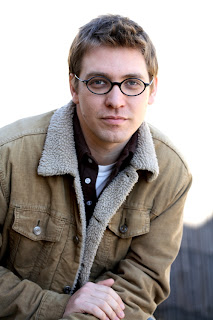 Q:  Tell me about Slowgirl.

A:  Hm...it's a two-hander: uncle and niece. What do I say? It takes place in Costa Rica, way out in the jungle. Snakes are mentioned. The niece is trying to escape from something really awful that's just happened. Her loner uncle is doing the best he can to help her out but he's got his own stuff...I always feel like I'm saying too much, Adam. Come see! It's at Lincoln Center's Claire Tow theater until July 15th. Anne Kauffman directed it and she's a wizard. Željko Ivanek and Sarah Steele are killer. Seriously—I'm not just saying that because it's my play. What else...I wrote Slowgirl a while ago, did a reading in my friend's living room, and then put it in a drawer for a long time, thinking it might live there forever. So I'm really happy that it's now living on the Upper West Side, in air-conditioning.

A:  I'm working on a three-part musical called The Landing with John Kander. We just did a lab production at the Vineyard Theatre, which Walter Bobbie directed masterfully. We're in discussion with the Vineyard about the next step. John and I are hoping to have a first draft of a new musical by the end of summer. I'm also working on a new play, and the libretto for an opera based on Thomas Mallon's novel Fellow Travelers (Gregory Spears is writing the music, Kevin Newbury is directing.) And I write fiction—mostly short stories, so that's ongoing.

Q:  How does your writing process differ when writing theater vs. fiction?

A:  The writing process is different for each project so there's no theater vs. fiction division in my head. Some things happen quickly, some don't. I tend to think about something for a long time, then write a quick first draft, then a slow and painful second draft, and then who knows? But it's always different.


A:  I wish it weren't so expensive to produce an Off-Broadway play. I wish all hard-working theater folks could make a living at it, and get insurance. I wish I could see a new Will Eno play every weekend. I wish jangly bracelets were illegal. I wish more people would go to new plays. I wish we could do away with all theater competitions, and just reward each other by showing up.

A:  I'm listing writers only, though I have lots of non-writer theater heroes like the set designer Rachel Hauck. But writers only: Will Eno, Pinter, Tom Donaghy, Annie Baker, Irving Berlin, Chekhov, Slick Rick, Doug Wright, Conor McPherson, Strindberg, Kenneth Lonergan. Lots of folks, but that's who's on my mind right now.

A:  Plays that have excited me this year: Denis O'Hare and Lisa Peterson's An Iliad, David Adjmi's 3C, Will Eno's The Realistic Joneses, Amy Herzog's Belleville. I don't know what these plays have in common, if anything, or why they excited me. They seemed like magic. Cheesy word, but how else do you say it? I left those plays thinking, "Wait, someone wrote that?" which is weird, seeing as I'm a writer. I like plays that remind me that the world is even bigger.

A:  Writing plays is a great thing to do because it's a great thing to do. It's easy to get all freaked out about where you fit in on some dumb spectrum but what's the point, you know? It's great to write something and do a reading in your common room with your friend, or to put up a show in your storage unit, or to just go to other people's plays for a while. Easier said than done, but it's good to be proud of where you are. Starting out is most excellent. If you've written 90 plays: also excellent. There's room for all of it. I'm not qualified to give advice but since I've been asked I'd say: just participate. In whatever way feels right to you. The only comfort in playwrights being wildly underappreciated in this day and age is that none of us is "making it" so we might as well just write what sounds good to us and support each other, right?
Posted by Adam Szymkowicz at 6/21/2012 10:21:00 AM