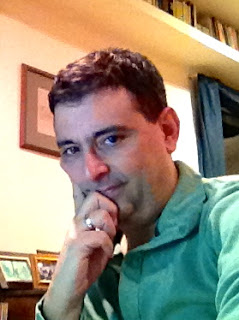 A:  What’s In A Name started off as a short play I wrote in 1994 that was loosely based on the Katherine Ann Power story. A young woman is conned into committing a terrible criminal act, and has to make life- altering choices in order to survive, but doesn’t realize until years – really decades – later just how life-altering they were.

What’s made working on this play fascinating is the experience of getting older along with the character. A person living under an assumed identity for 15-something years is interesting, but a person living that way for, say, 40 years is infinitely more compelling. Because your life goes on, usually when you’re not looking, and you continue to make choices, and those choices pull you down a road that you may not even know you are on, until its too late. The story in What’s In A Name is unique, but in a lot of ways I found myself identifying with it in ways I couldn’t even imagine when I first wrote it years ago. The idea that you get to a certain age and think, like David Byrne said, “how did I get here?” And can I keep going in this direction? Should I, even? And what is the price of trying to unspool things?

When Susan, the main character, who hasn’t had a good night’s sleep in forty years, drops her guard and wanders into a bar because she’s reached a point of exhaustion, she sees that she can’t put off dealing with these things any longer. From there, we’re off.

A:  Couple of things. I always try to have a few ideas in the hopper. I invite them in and see which choose to stay.

A:  I’m not sure that I have one. I started writing because when I was twelve I wanted to write James Bond movies. I got into theater in ninth grade when a girl I had a wicked crush on asked me to audition for “Arsenic and Old Lace.” It was probably the longest conversation we had. (I got the part, though.) I’m not sure what this says about me or the work, beyond that I still have a 007 screenplay in my desk and that I owe a lot to Ann Marie Giordano.

I do remember one interesting little tale from my teenage years in Mahopac, NY. We had a deacon at our church, young man, very nice, very energetic. First priest or deacon at our church under fifty in a long time. Opened the gym three nights a week so we could play basketball. Killer under the boards. Before too long, everyone in town loved him. Understand that about eighty percent of Mahopac went to this church. So one day, he’s just gone. Gone. Poof. People asked after him, nothing. No explanation, no goodbye, no thanks for the memories. Just a hole, a void of information. And what I learned is just how fast and how madly people will rush to fill that hole. He was with a boy. He had a fight with the Bishop. He discovered something bad in the rectory and wouldn’t keep quiet. He was gay. He was a spy (the 007 fan liked that one best). And these were not the town crazies, they were the people you talked to all the time. In the absence of truth, people will invent their own. Sometimes it’s amusing, sometimes it’s dangerous, but it’s never good. I find a lot of my stories all seem to roll back to what people will do in the absence of truth.

A:  I’m probably not breaking any new ground here, but the balance between art and commerce is way out of whack. It’s so hard to go to Broadway now, and not for the reasons you think. If you will allow me to digress…

When I go on vacation, I want everything to be perfect. I want nice weather, I want good meals in whatever restaurants I go to, I want any activity I undertake to be just right. Nothing disappointing. So if my vacation was to come to New York City and see theater, I want to make sure it’s perfect, and by gosh, it’s gonna be.

The last two Broadway shows I saw…I won’t say which ones…were good, but they didn’t change my life. And yet, as soon as the final number ended, everyone around me was on their feet applauding like their seats were on fire. Everyone around me is standing and applauding, screaming and flapping. Now, there are worse sins in the world than standing for an ovation that hasn’t quite been earned, so up I go. But it’s not real. It’s almost like the standing ovation is just part of the performance. And I can’t blame folks for acting this way, because this is their vacation and their experience and they spent the money and they spent the time and they’re gonna believe it’s amazing, even if it isn’t.

Theater needs art and commerce (that’s why it’s not “show art”), but when the commerce gets so far out in front of the art, you have results like this. And it can’t be sustained. After all, what will there be to revive in twenty years?

We need to do a better job building audiences and improving the business model, and most of all getting away somehow from the idea that’s it’s an offense against vacations to take a chance on a show that might not be a sure thing.

A:  Samuel Beckett and Thornton Wilder. Any theater artist who finds a way to harness the form to increase its impact on the audience.

A:  Whenever the form of live theater is used to extract the power of the story. Theater provides what other media cannot… the chance to be in the room with the drama, the chance to feel it as opposed to just seeing and hearing it. The power of a simple story well told.

A:  If there’s one thing I wish I had been told when I first started, it’s that this is really hard work, real day-in and day-out work, and it’s impossible to do alone. So find the community. Make sure you have artistic kindred spirits around you for support and to keep you accountable. People who, if you say you’ll have a new scene Tuesday, will actually be disappointed if you don’t have a new scene Tuesday. Because you need to work at your writing every day, every damn day, or its not going to happen. And the only way to see your way through that is to be among others. It brings the work out of your head and into the world where it can grow. It’s like raising a child. A play is only finished when it’s not yours anymore, when it can stand in the world on its own. That doesn’t happen if it never leaves your desk.

Variations Theatre Group (variationstheatregroup.com) is putting up this version of What’s In A Name as part of their Harvest Festival, and the reading is November 18th (a second date is TBD). They’ve just turned an old factory and former crack house in LIC into the Chain Theatre; we’ve been rehearsing there and it’s beautiful. We’ve had so many theaters cut down in New York over the past few years, it really is wonderful to see one break the surface and grow. I’m hoping to continue working with them.

Of course you can check out my earlier plays at Indie Theater Now, Martin Denton’s wonderful publishing house of e-plays (is that a word?). Acts of Contrition, The Way Out, Wrong Barbarians, and NotDark Yet are all available for perusal and purchase.