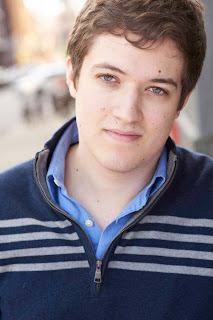 A:  Words, Razors, and the Wounded Heart is a Jacobean Revenge Comedy set in present-day, suburban Connecticut. It’s the story of the impossible romance between a brother and sister running simultaneously with the return of an iconic ‘prodigal son.’ When their friends get involved… well, you know. It’s dirty and sexy and loud and silly and mischievous and horrifically tragic.

Q:  Tell me about Less Than Rent.

A:  Less Than Rent is a theatre company that I started with some of my friends in 2010 while we were doing a punk rock Richard III at FringeNYC. WRWH is our 7th production. Time flies when you’re working yourself into the ground! We aim to contribute to the larger discourse through art that is fresh, adventurous, and thoroughly caffeinated. New work by new artists for new audiences all day every day good to the last drop.

A:  This summer I’m directing Ben Diserens’ Beckett in Benghazi at Under St. Marks with Less Than Rent/Horse Trade. We’re being supported by LMCC, and we’re pretty excited about spending the government’s money. I’m lobbying our production manager for a fly system and live animals. I’ll let you know how it goes. And, of course, I’ve got a couple of my own plays in the works. Similarly to Words, Razors, and the Wounded Heart, they’re comedies about futility, despair, and broken dreams.

A:  My first theatrical experience was playing Fievel in An American Tail when I was four. Legend has it that during the performance, I mouthed everyone else’s lines while they were saying them. Afterwards, I cried for hours. Legend also has it that I was terrific in the role and “was the only one up there who knew a damn thing about acting.” (My grandfather is the official recounter of said ‘legends’)

A:  I want more walkouts (and, by extension, plays that inspire them). I loved The Flick at Playwrights Horizons, but I also loved how much some people hated it. It was exciting. I felt nervous, but it was in the best possible way. A few months ago, I saw Django Unchained in the theater; the whole time everyone was looking around anxious that someone was just going to freak out. That danger… It’s the best.

A:  I like troublemakers who tripped into the mainstream: John Osborne, Mike Daisey, Clifford Odets. I also like this up-and-coming theatre company, Less Than Rent.

A:  I like the stuff that wears its heart on its sleeve without losing its edge. I’m really into Elevator Repair Service; whoever wrote Gatz is great with language.

A:  Well, since I’ve been at this for over 20 years, I think I’m pretty well qualified to give advice, but just in case you don’t… CS Lewis says “practice,” Saul Bellow says “start anywhere,’ and Billy Collins says “keep your room clean.”

A:  I’ve got WORDS, RAZORS, AND THE WOUNDED HEART opening at Under St. Marks any second! April 11-27, Thursdays through Saturdays at 7 PM. Tickets are cheap, and the show is adventurous. And for the latest Less Than Rent gossip, go to www.lessthanrent.org. We have great pictures. Plus, check us out on Facebook (/lessthanrent) and Twitter (@lessthanrent). I’m sure everyone says to do that, but I promise we’re really fun.
------