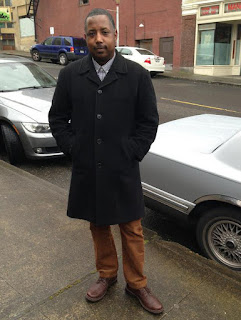 Q:  Tell me about One Night In Miami.

A:  When I was a freshman in college, if you would have asked me who my biggest inspirations were, I would have said four names. Muhammad Ali. Jim Brown. Malcolm X. And Sam Cooke. So, when I found out as a young man that these four were actually friends, my mind was blown. It's the equivalent of accidentally stumbling upon a black Justice League of America. Only the thing bonding these four at the time wasn't their collective status as heroes, but as outlaws. One night was especially fascinating to me. February 25, 1964. That was the night Cassius Clay beat Sonny Liston to become heavyweight champion of the world at only 22 years of age. Everyone knows this. Many people also know the very next morning, he announced that he was a member of the Nation of Islam, a group personified by its fiery minister, Malcolm X. But what hardly anyone knows is that between the end of that fight and the announcement the next morning, the new champ spent the night in a tiny motel room with his friends Malcolm X, Sam Cooke and Jim Brown. One night and four not-yet-legendary men seemed like too juicy a setting for me not to explore in a play, and that seed became the basis of One Night in Miami..., where I imagine all of the many things these men could have discussed, disputed and possibly resolved when left alone in a room for one revelatory evening.

A:  I'm putting the finishing touches on a new play, The Two Reds. Another fun exploration into history that finishes my little "cycle" that began with One Night in Miami... Though this story takes place much earlier. When Malcolm X was still a young hustler named "Detroit Red," he worked in the kitchen at a jazz club alongside another, more outspoken young redheaded black guy called "Chicago Red." Of course, this person would go on to be known as the great comedian Redd Foxx. My play takes place in the kitchen of that jazz club, and includes a greater cross-section of characters, races and personalities from the time. It explores issues of class and race that, though historical, I feel are quite relevant in a contemporary setting as well. But the central protagonists are definitely the two reds, though at no point do we ever call them by their actual names (Malcolm and John). I'm also very excited about this one, and hope to start having some staged readings by the end of this year.

A:  I started writing more out of necessity than desire as a young man. My buddies and I would create little comic books in our spiral notebooks, and I was always tasked with writing the stories. I guess I was just the best at articulating an idea within our little group of neighborhood kids. I guess you could say that skill has served me well throughout life, as I ended up becoming a journalist and having to give a voice to many people who can't quite put into words what's going on in their world.

A:  I'd change the perception that great theater can only originate from a couple of key "theater cities" around the world. It can come from anywhere.

A:  August Wilson. Sam Shepherd. My fellow Rogue Machine Theatre resident playwrights, such as John Pollono and Henry Murray. It's great to be in a community of playwrights. They are an invaluable sounding board.

A:  I love seeing new plays. And I feel lucky to be in a city where so many writers are taking risks and creating new works on a regular basis. It also gives me a window into the issues that are important to writers of different age, sex and background.

A:  Above all else, hone your craft. I participated in so many short-play and 24-hour playwriting programs at Rogue Machine before I had the confidence to begin writing full-length plays. And even then, the painful process of rewriting ends up being how I spend most of my time. It's always wonderful to have a great idea for a play, but it is so much more important to have the skill and craft to execute it. I'd rather see a well-executed play based on a subject I'm less interested in than a poorly-executed play based on something about which I'm passionate.

A:  One Night in Miami... has its world premiere on June 8 at Rogue Machine Theatre in Los Angeles. The play will be running June 8-July 28, and tickets can be purchased here: http://roguemachinetheatre.com/wordpress/show-info/one-night-in-miami/ I'm very proud of it, and so many people have poured their hearts and souls into this production, so I really hope as many people as possible have an opportunity to see it. It will be a fun night of theater!