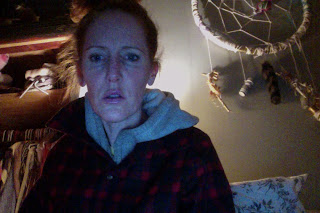 Q:  Tell me about Mona's House of Dance.

A:  It’s a play set in a small-town tap studio, which we’ve recreated in a real dance studio at Abrons Art Center. A seasoned tap teacher (Jim Fletcher) and his piano accompanist (Paul Pontrelli) prepare to teach a solo class to a young student (Jess Barbagallo) in preparation for a tap contest. The room becomes a hotbed of tension, however, when a fourth person played by Elizabeth DeMent crashes their landscape and vulnerabilities are exposed. There are beautiful original songs and a score by Chris Giarmo, and awesome and exciting tap choreography by the tapper and performer Hannah Heller.

I think of it as this crazy dark poem that is also a situation comedy that unfolds in the real-time of this hour-long class that is just unraveling before the characters’ and our eyes.

A:  Several shows I made with my company Half Straddle over the last couple years and showed in New York City are now touring internationally for the first time, so we’ve been rehearsing and prepping those for tour over the last month. We just got back from the Culturgest festival in Lisbon doing a show called “Away Uniform.” And the day after “House of Dance” closes we travel to Normandy, France to tour our shows “In the Pony Palace/FOOTBALL” and “Seagull (Thinking of you)” at three festivals – so it’s been a lot of work recently and huge learning curve stuff of getting these shows and everyone ready to go on tour in terms of rehearsal and logistics. I have a project called “Ghost Rings” that I have been working on over the last year with the composer Chris Giarmo and the performer/singer Erin Markey on – and we’re going to work on that at some point in the spring through the Wooster Group’s Performing Garage Residency – and excitingly Kristen Sieh will join us then as a the third performer. So we get together when we can on that and make new songs and do bits of rehearsing so that’s currently ongoing. And, then excited for a project we’re doing at The Kitchen over the next year in short open rehearsal residencies leading up to a full show in early 2015, so developing text and video (which is new for me and the company) for another short residency there in early December.

A:  When my little sister was like 9-years old and threw a giant teddy bear – like a 5-foot tall bear down the cellar stairs without looking and it almost killed my single mother who was walking up the stairs (she barely missed falling off and onto the cement floor which literally could have been deadly) – and my mom was screaming “You could have killed me!!!!” and my sister was crying and I was terrified that we were super screwed up, but under my 11-year old despair there was also this lurking feeling that the moment was also so funny and so full of love – and I knew that somehow, and it feels like the kind of awful, amazing moment I am inspired by theatrically.

A:  More exciting, challenging, aesthetically interesting modes of written discourse around theater. Jeff Jones, for example, sends these incredibly smart dynamic emails out about shows he’s seen – or to you if he’s seen your show – and it’s just a level of synthesizing and considering theater that is complicated and smart and inspiring that does not happen in any other theater and performance writing right now in the mainstream modes – there are obviously journals that cover this that go deeper – but I think there is some really smart people that are not just critics thinking and considering this stuff and would love to see it really catch on more. I think Claudia La Rocco (who obviously is a critic but) has an online model that’s interesting and a creative approach that feels like its attempting to be more in dialogue with the spirit of how live work is created and thought about – and I wish more stuff like that that could get a real hold and challenge the space in brains and egos that we (totally including myself) give to the current mainstream press and reviews and really crave a different intellectual context for how it’s being processed that extends beyond, and way more visibly, than the current paradigm.

And I always feel incredibly lucky to work with the performers and designers who work on Half Straddle shows.

A:  It is something the brilliant Kristen Kosmas (who’s also a hero of mine) has described as something like that quality where you don’t know where the show and performance is going and it constantly surprises you, but it feels like on a kind of – in that moment – relevant trajectory that is basically magical, so when that is happening and it holds and I can’t take my eyes off the performers, I am very excited. Also excitement happens more in moments of shows for me, than full shows and I love that – like a shoulder turn by one actor I remember from a Richard Maxwell show – it was perfect. Or one moment of singing like four seconds long by Kate Valk in the Wooster Group’s “House/Lights” that was everything and made the show sublime in that microcosmic moment.

A:  Work your ass off. And take advantage of any ways you can to show even small work, cause the spark of those projects always leads to something – once you share and put something out into the world, stuff happens – then it’s having the energy to follow up and keep going with it in some way that feels right.

A:  Big Dance Theater’s “Ich, Kurbisgeist” by Sibyl Kempson, that is opening like now or very soon I think, is pretty insane. And come see House of Dance this run and it reprises for a mini-run during the COIL Festival in January!