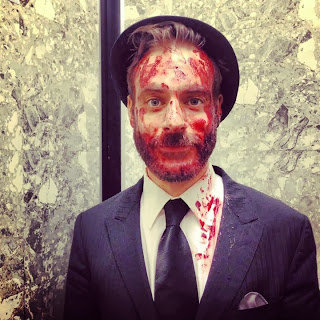 Q:  Tell me about Sunny Afternoon.

A:  Sunny Afternoon is my contribution to the Kennedy assassination, an event that has fascinated me since my single digit years. It is a look at the 46 hours that Lee Harvey Oswald was in the custody of Dallas homicide captain Will Fritz. Sunny Afternoon is the first sequence in my playbook G-BOY//THE J. EDGAR HOOVER PENTALOGY - a look at the power and corruption of J. Edgar.

A:  I am currently directing Sunny Afternoon @ The Asylum Theatre in Hollywood, putting the finishing touches on a music video that I directed for Matt Mann and The Shine Runners as well as working on the follow up to Sunny Afternoon a two-act play entitled Black Bag Job (the second sequence in G-BOY).

A:  I'm always looking out for the party. I've never wanted to ruin anyone's enjoyment. At the age of six, I broke my arm at a family picnic. I didn't tell anyone because I knew it would stop the party and I remember everyone was having fun. One of my earliest memories that still has much detail, I believe I was two years old and I attempted to shave with my father's razor. Very bad idea. I cut my lower lip open pretty bad. I was unsure what to do, but I knew this wasn't good. I crept downstairs and saw my folks watching television. They seemed to be enjoying the program and that made me happy, so I went back upstairs, grabbed some tissues and a green bucket. I put the tissues on my lip, the bucket over my head, handle against my neck like a chin strap and went to bed.

I've been looking out for the audience for awhile. ;)

A:  I would make the consequences for bad theatre - extremely severe. Perhaps bring tomato throwing back? Or face punches? That'd be cool. Bad actors get jumped when they get off stage.

A:  Orson Welles with The Mercury Theatre Company and Woody Allen. I'll throw Stanley Kubrick in as well even though he directed no theatre, you'd never know that from his films however. All three trust in their writing and let the actors do their thing in a wide shot. I love that. They brought theatre to film for me. Write good dialogue and get great actors to speak it.

A:  WORKSHOP or be BULLSHIT. You must be willing to collaborate and know when another idea is better than your own. Have an ego when your kid's hitting home runs for Varsity not when he's playing tee-ball.

And NEVER be satisfied.

A:  Come see Sunny Afternoon running unil 12/01. Black Bag Job will be workshopped at The Asylum Lab at the Hollywood Fringe Festival in June of 2014.
LIKE the gangbusters theatre company on Facebook, PLEASE (it helps spread the word).

I would make the consequences for bad theatre - extremely severe. Perhaps bring tomato throwing back? Or face punches? That'd be cool. Bad actors get jumped when they get off stage.

I do agree that bad theatre should not get a free pass the way it often does, but as a theatre critic who is also a theatre-maker, I feel that the actors are the last people to blame for bad theatre (unless they are playing double duty as a producer, playwright, or director.)

Bad (or more often than not, miscast) actors, are in their position due to decisions made by the director and producers. If there is ever a single person to blame for a bad play or bad production, it is usually either the director or the playwright.

Save your tomatoes and beat-downs for them.