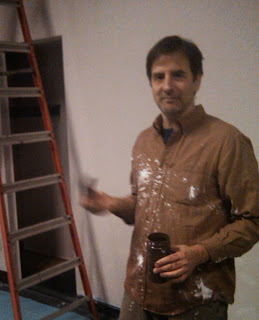 A:  I’m working on a number of different types of things right now including the final play in my Love Gone Wrong at the End of the World Trilogy. I’m also finishing up what I hope will be an innovative online/offline acting book that is specifically about acting in modern, heightened plays. I am first releasing a shorter version online in January and then I will begin to look for a print publisher as well for a more in-depth version that I have been working on. Hopefully my Love Trilogy play will be out in the spring if I like it well enough. I’ve held or killed my last several plays so there is no telling with me. I am not a fast writer anyways even though I am out of that school that produces a lot of content. I typically write several hundred pages that are a sort of a mash of things and then I start prowling around and asking myself, is there an important story in here that is entertaining enough to me that I feel excited to spend another few months with it? If not I just treat it as practice and move on.

A:  Mojo theatre is "magical powers” theatre. What are those powers? Expressionism, symbolism, sound, film, audience interaction, internet, thematic food service, program design, opera, lighting, pre-show acts, costume, cell phones, dance, improv, live music—every art form and every available mode of expression, harnessed in whatever way best tells the story of the piece being undertaken by the company. It is essentially heightened modern theatre grounded in old-school theatre principles, where storytelling takes precedence over any uniformity of style or tone.

And the story of the piece makes up the center. So far we usually use a verbal concept statement to define this story. This statement then becomes the center of gravity that all these magical elements swirl around, and not only the designers, but the actors are expected to fully participate in this. Do you have an idea about how a dramatic entrance through the audience will help tell the central story? Great, let’s see it! And now this new entrance gives the lighting designer a new idea she wants to try with a new lighting special? Great, let’s try it again with the light! And then someone has another idea and off we go, building a multi-ringed universe outward in layer after layer of thematic storytelling.

A:  Well, every Christmas someone tells this story about me so “it must mean something.” When I was I was about 9 or 10 years old we were decorating the family Christmas tree on a snowy winter night and I was sort of tossing the tinsel onto the tree in a way that I thought was artful, doing it in a way that it landed kind of randomly and all together created a sort of frozen waterflow look. I was told repeatedly by the adults that I needed to put the tinsel on more neatly like everyone else was doing until finally I got so frustrated by this ongoing “repression” that I stormed off into the basement, dug around until I found a rusty, old hacksaw and made my way out into the snowy woods. After a lot of stumbling around in the dark and an exceptionally long struggle in the bitter cold, I finally returned, triumphant, with a scrawny little Charlie Brown Christmas tree of my own. And I set it up in my bedroom and decorated it with a few ornaments—and of course I put the tinsel on the right way—the artisan way. All the kids gathered around in astonishment and my mother excitedly took pictures. Everyone laughs so hard when they tell this story. I guess it epitomizes me as a person for them, one part gentle artist, one part stubborn old man, one part zealot. That’s probably somewhat accurate.

A:  I am going to surprise myself and say that theatre is right where it needs to be. Like the human race I think it is poised at the leading edge of a time of enormous transformation. We just need to stay very aware and tuned in.

A:  Funny you should ask about heroes, the name of the acting book I am finishing right now is “Theatre is for Heroes.” Because theatre is for heroes. Writing, staging, and performing in plays is for people who press on tirelessly and persistently in the face of overwhelming odds—and these plays we stage are about characters who do the same, it is the stuff of theatre. Sometimes to simply complete a difficult play or get that play to its feet against overwhelming and constant setbacks can take a staggering amount of courage and effort and grace. Quite a lot of my teachers from the past are and were these kinds of heroes, both my undergrad teachers at Trinity College and also my grad teachers at Trinity Repertory. I watched them make a life that was based on bravery and persistence, both on off stage.

As for some well-known artistic heroes, Robert Edmond Jones’ The Dramatic Imagination has always been a huge influence on me. I’ve read that book so many times. I find it incredibly moving and inspiring. I am also a big fan of Charles Mee and not only his plays, but the entire imaginative sensibility he brings to the theatre through his writing and his personal presence and attitude. My love trilogy is a response to Mee’s love trilogy—First Love, Big Love, True Love. Jose Rivera has also had a large influence on my sense of theatre, especially from the perspective of playwright--what is possible theatrically when you strike out boldly into new territory as a writer.

A:  Theatre that takes you on an epic journey and literally changes your whole being in the process. Changes everyone in the room as they are watching together. And you can feel it happening, feel yourselves changing, all together. The transcendent energy in the room is palpable and you are all traveling together. And to make that possible, to take an audience on that journey requires an intense commitment to both power and skill by the playwright and producing theatre. To enable the level of not only storytelling, but trust, that this audience wants to go on the journey with you.

A:  First learn all the playwriting rules—down cold—they matter. Then break all of them. In a series of writing experiments is fun. For example, start by learning standard play format. Then try writing a performance piece in a different format. Standard play format is a clear and strong format for writing western plays. On the other hand, like in all cases there may be some truth to its opposite: “standard play format produces standard plays.” The opposite of every traditional rule can also be a very powerful and magical rule, and sometimes just a very ridiculous one.

Never make the audience sit through a full-length play whose central conflict could be resolved in three therapy sessions or less.

Don’t give up on your own vision for theatre.

Don’t rely on blind submissions to get produced. I used to think of this as the ultimate in validation—somebody I don’t even know wants to produce my play! Now this idea seems funny to me. Find people who understand and are excited by the vision of your plays and stage them together. Or stage them yourself. I have seen a lot of wonderful self-produced works lately, including a number of them hosted at hosted recently at Mojo.

A:  Come check out what we are doing at Mojo Theatre, mojotheatre.com, and a number of my plays and other projects can be found at the new site I am building right now at peterpop.com.