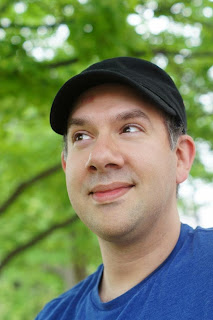 Q:  Tell me about The Goldilocks Zone.

A:  The Goldilocks Zone is the story of two couples, one straight (Franny and Ray) and one gay (Matt and Andy). After discovering that they would not be able to conceive a child naturally, Franny posts an ad on Craigslist searching for a sperm donor--and Andy responds. They quickly hit it off--but have to deal with the ramifications of their secrecy once they reveal themselves to their significant others. The play deals with questions of the modern family: what does it mean to be a father, a mother, a husband, wife, or spouse? What are the expectations placed on us by society? And when those expectations can't be met (for whatever reason), how do we handle the fallout?

The title references an astronomical phenomenon called the 'Goldilocks Zone,' where astronomers can look at other galaxies and other solar systems and determine whether a planet might be capable of sustaining life like we have on earth. They look at the distance between the planets, the planets and the sun, the rotation of the orbit, and can tell when the circumstances are right--not too hot, not too cold, just right--for life. And this phenomenon serves as a central metaphor for the play--each of the characters has to be in the right place in their lives in order for life to be created.

I've been working on the play four years or so, and I'm thrilled that it's finally getting it's first production at Passage Theatre Company in Trenton, NJ. I've got a great cast--New Jersey (formerly New York) resident Trent Blanton, as well as Jessica DalCanton from Philadelphia, and Andy Phelan and Dan Domingues from New York. The play is being directed by the brilliant Damon Bonetti, co-artistic director of the Philadelphia Artists Collective, and my long time collaborator. Damon and I have been working on this piece together for at least three of those years, and I am ecstatic that he is here to usher in this production.

A:  I'm gearing up to start a new draft of a play I've been working on for about a year. Tentatively titled You'll Never Know, it's a piece about the dangers of transparency (inspired by the Edward Snowden debacle): what information is essential for us to know--and conversely, what information is essential for us NOT to know. Three pairs of characters wrestle with these questions in three separate (but connected) stories: one of which takes place in London at the end of World War II, one in New York at the height of the Cold War in the 1970's, and one in contemporary Washington DC. It's a research play, which I love, but weaving in and out of three time lines makes it a bit tricky. I wrote about 60 pages of a first draft, but need to junk it and start from scratch. So as soon as Goldilocks Zone is done, I'll be diving right in!

I'm also writing my first novel for young readers--no title yet, but I'm writing and illustrating it by hand. It's been a lot of fun, and a different kind of creative exercise for me. Who knows--maybe it will lead to something!

A:  I've always thought of myself as a storyteller: I used to sneak downstairs in the middle of the night to write mediocre fantasy fiction when I was, like, eleven. (And by fantasy fiction, I mean Dungeons and Dragons type stuff--nothing scandalous.) But I've always been fascinated with the way that good fantasy writers can create worlds--think Middle Earth, Narnia, Gormenghast. And though I don't usually write fantasy--I dabble in magic realism from time to time--that idea of creating alternate worlds has always appealed to me. What is a play, but a 90-minute alternate reality? I learned early on that if I want audiences to take the leap into these worlds of mine, that I needed to focus on the rhythm of the language--the way Mamet and Pinter and Beckett and Suzan-Lori Parks write lines and scenes that are nothing short of musical. So my use of language varies from play to play, in order to establish the voice of that particular world--whether it takes place in war\-torn Northern Ireland, or post-Reconstruction Appalachia, or contemporary New York City.

A:  There are certain playwrights that get my motor running: I studied Tom Stoppard in high school, read everything I could get my hands on and then saw the original production of Arcadia and it blew my mind. But I also love Chris Durang, John Guare, Peter Shaffer, David Henry Hwang, Lynn Nottage. I worship at the shrine of Suzan Lori-Parks. My husband and I saw the Public Theater workshop of Father Comes Home from the War, Parts 1 - 3, and we couldn't breathe for the car ride back to NJ. At night, I dream of Caryl Churchill; I saw Blue Kettle at BAM back in the late 90's and it changed my life.

But there are other playwrights, some of whom I have gotten to know over the last few years, and whom I look to for advice and criticism, and I sit in awe of what they have accomplished. Michael T. Folie, whose Panama and Love in the Insecurity Zone are two of the most brilliant comedies I have ever read; Dan Dietz, for whom poetry drips from every typed word, and whose play Tilt Angel (which I was fortunate enough to be in at the New Jersey Repertory Company back in the day) makes you dream and weep simultaneously; E.M. Lewis, who infuses electricity into every word she puts on the page--her murder mystery True Story is gripping--but Heads will haunt you for weeks. Her latest piece, called Magellanica: A New and Accurate Map of the World, is about a exploratory winter-over in Antarctica in the 1980's. It is breathtakingly complex--even in it's early stages--but absolutely engrossing.

A:  All sorts of stuff--but I am most excited by honest storytelling. There is something delightful about special effects and stage trickery, but solid, beautiful stories get my motor running. Things like David Hilder's Drown, or Jim Christy Jr.'s Egyptian Song--E.M. Lewis' Gun Show. Stories where I'm invested and connected and not talked down to. My friend Mike Folie (whom I mentioned above) once told me that a play can do three things: It can entertain you, it can make you feel, and it can make you think. A good play will do two of these things--but a great play will do all three. That's what excites me--and that's what I try to write.

A:  Hmm. Okay--
Think of every play as an experiment--and try something new each time. It doesn't matter if someone else has done it before--as long as it's new to you, you should do it. And don't be discouraged if it doesn't completely work--salvage what you've learned from it, and start something else. Oh--and don't be a playwright with only one play. As soon as you finish a draft you're pleased with, have a new project lined up. There's always something to write. There's always something new to explore.

Tickets are on sale NOW! Go to www.passagetheatre.org for more information!