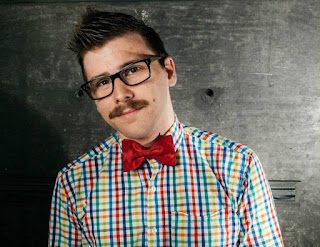 Q:  Tell me about your OOB play.

A:  That Noise is about three co-eds dealing with their first taste of college and adulthood, and all the terrors--both real and imagined--that come along with that. It's a comedy, but I'm also definitely interested in exploring more serious issues of fear and sexual danger, particularly in relation to our current quote-unquote "rape culture." Hopefully, it's the kind of play that you can just take at face value and enjoy as a horror comedy, or, if you so choose, something that you can also examine deeper as a theatrical discussion about certain problematic aspects of our contemporary culture.

A:  I'm working on a romantic comedy about professional cuddling called The Found Dog Ribbon Dance that's being workshopped at the Kennedy Center as part of the NNPN MFA Playwrights' Workshop. I'm also developing a play about a transcendental Barbie cult, tentatively titled Astral Princess Saves Mankind, that I'm heading up to the Barn Arts Collective in Maine to do some more work on this month. And then later this summer I'm starting to dig into working on a dark comedy about school spirit under the mentorship of Gregory S. Moss.

A:  When I was little, I was obsessed with G.I. Joes--the little ones. I had dozens and dozens of them, and I would obsessively play with them and construct these wide-reaching narratives and highly specific character arcs, and I would "act" these stories out so vigorously that the G.I. Joes would fall apart and I would end up with a handful of stray arms, legs, heads, and hip pieces. My parents would collect all of these wounded and disabled Joe vets and put them in plastic containers rather than throwing them out, I have no idea why--to keep as mementos? To this day, in some shed in California there are multiple boxes of stray limbs and torsos, a decapitated G.I. Joe graveyard full of those brave plastic soldiers who gave their little lives in service of my first storytelling, my first obsessive attempts at creating characters and conflict and action.

A:  More affordable ticket pricing. More theatres, both in New York and regionally, taking full advantage of the multifarious magic offered by a good dramaturg. More theatres devoted to new plays, and not just new plays, but first plays. I want to see a New York theatre that solely produces the first professional productions of new playwrights, or at the very least their first New York productions. A new play by an established, mid-career playwright will find its way in this artistic culture--a new play by an untested writer needs all the help that it can get.

A:  I think Les Waters is the greatest artistic mind (and human being) working in theatre today, and he's a guiding force in how I think about art and the business of theatre in the 21st century. Anne Washburn and Jenny Schwartz are huge professional and personal inspirations to me. Other contemporary writers like David Adjmi, Lucas Hnath, Mallery Avidon, Dan LeFranc, and Gregory S. Moss blow my mind whenever I get the chance to read or see their work. Thinking more historically, all the usual suspects: Ibsen, Chekhov, Beckett. Gertrude Stein Gertrude Stein Gertrude Stein. And I'm really rooting for Maeterlinck to make a comeback and return to artistic relevance--I think he's one of the great forgotten masters of the late 19th/early 20th century, and my introduction to his work really did a number on what I thought about theatre and its capabilities.

A:  Linguistically acrobatic work. Work that marries formal experimentation with emotional honesty. Work that acknowledges that theatre is a live event with an audience present and that is not afraid to engage that audience. Theatre that is proud to be distinct from film and television. Really, what I'm most excited about is the new wave of young playwrights that are pounding on the doors of the American theatre ready to be let in. I think we're in an unbelievably fertile moment for new plays, and I can't wait to see what happens when more and more of these brilliant writers get the chance to strut their stuff--I'm talking about people like Max Posner, Clare Barron, Sarah Delappe, Jerry Lieblich, Sarah Einspanier, Claire Kiechel, Caitlin Saylor Stephens. It's really an exciting time to be a young playwright.

A:  Read everything you can. Not just plays, but EVERYTHING. Novels, newspapers, scientific studies, candy bar wrappers. Everything. Also, see everything. Be a sponge. Find mentors and role models and listen to everything they say and tell you to do, and then don't be afraid to do the EXACT OPPOSITE. Find friends you like to make stuff with and then make stuff. Don't give up. Never know what you're doing; cultivate having no fucking clue whatsoever. Also--only get an MFA if you actually want one, not just because someone told you that that's what a writer is "supposed" to do in this artistic market. At the end of the day, just do you; if you're really committed to following your own truth, it'll make all of the inevitable hiccups and disappointments along the way so much easier to bear. They'll still suck, don't get me wrong, but they'll just suck slightly less, and that "slightly less" can make all the difference.

A developmental showing of Astral Princess Saves Mankind at the Barn Arts Collective, June 20th @ 7 at the Barn (130 Tremont Rd., Bass Harbor, ME)