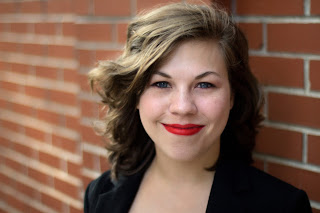 Hometown: Woodbury, NY (You know, where the Woodbury Commons are)

A:  I'm wrapping up rehearsals for my play BONESETTER with Spicy Witch Productions. I'm also doing research for two new plays, one of which is about a small ska revival that happened around 2007 in the Hudson Valley, and the mythology that surrounded the scene.

A:  I knew I wanted to be a writer at a pretty early age. Around four years old I wrote my first story, "Snow White and the Bears," which as a title, is a theme that has held pretty true to this day. 1) I still think bears are hilarious, 2) I like incorporating elements of horror into comedy.

A:  I would love for those of us who write straight plays to remember the entertainment value of theatre. I feel like we get so bogged down with sounding literary that we keep creating a collection of boring plays. I would love for people to bend genre more, and have joy beam out of their text-- no matter what the story is. I'm not saying you have to write something loud and spectacular to write something entertaining, just to treasure the story you are telling, and remember who you're giving it to.

A:  I love Martin McDonagh and Tom Stoppard. Presently, however, I love people like Sarah Ruhl, Anne Washburn and Madeleine George.

A:  This sounds vague, but anything with a new perspective. I love the diversity of stories.

A:  Take all the jobs. Work the light board, hang out after the show, go to people's readings. Keep talking to people until you meet someone you really want to work with. Then make a play. And have a really good time.

A:  Come see Spicy Witch Productions' Tragislasher season: BONESETTER: A TRAGISLASHER in rep with its source material THE REVENGER'S TRAGEDY by Thomas Middleton. Bonesetter discusses the correlations between Jacobean tragedies and modern horror by adapting Middleton's satirical tragedy as a campy 80's slasher movie. It's also a comedy! It's also super feminist! And there's a lot of blood!
Tickets here: https://www.artful.ly/spicy-witch-productions