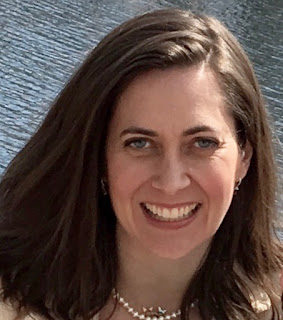 
Hometown: Scarsdale, NY is where I grew up.

Current Town: New York, NY is where my kids are growing up.

Q:  Tell me about Hysterical.

A:  It's the story of five girls' strange and terrifying year. One by one the girls on the Bandits' cheerleading team succumb to a mysterious illness, upending the traditional pecking order and testing the girls’ relationships with each other. It was inspired by actual news stories about mass hysteria among modern American high schoolers. If there is a theme in my work so far, it is that I tend to be interested in characters who might be written off as trivial, but who are struggling and trying desperately to be heard. In this play in particular, I have tried to focus tightly on the voices of the young women who are afflicted, so there are no mothers, fathers, coaches or teachers onstage. It is just them.

In an early draft, in a class I took at Primary Stages with Stefanie Zadravec, she identified an impulse I hadn't named but was following, about how I use the girls as their own Greek chorus to tell their stories. It gave a name to what I was trying to do, and I worked harder in subsequent drafts to make sure that I followed that instinct. So throughout the play, there are moments when it gets to be too much for the girls, when they break the fourth wall to comment on what is happening to them through fully embodied cheers. It requires an awesome cast able to reveal the delicate inner lives of these fragile young women, and also capable of stomping, shouting and doing stunts and splits. I like to think it is a poignant, cheer-full look at life on the cusp of adulthood.

A:  I have a newish play about the corrosive effects of social media on human interaction, which needs work, and a couple of problematic older plays that I'd really like to get my hands dirty revising. One is about a group of pageant moms (and Sarah Palin makes a nice cameo), and the other is about a new moms' group and is the most naturalistic of all the plays I have written so far. I've also been given small short play assignments by a couple of theatre groups I write with (I'm on the board of a newly formed company called Mason Holdings which is having a launch this fall) so I've got the month of August, when I'm no longer allowed to revise Hysterical, when I'll need to write those.

Q:   Tell me, if you will, a story from your childhood that explains who you are as a writer or as a person.

A:  Well, in terms of ambition and a love of writing, it would have to be my impulse at age five to declare to anyone who would listen that I planned to be a novelist (pronounced NO!-velist). That was also when I would give impassioned introductions at imaginary conventions, jumping on my parents' bed, shouting "Ladies and Gentlemen! President Jimmy Carter!!" I'm still a fan of his, so as origin stories go, those two impulses still feel like honest seeds of the person and writer I hoped to be.

A:  Hm. I have to say that I'm heartened every time I see a play that changes my perception of the world and as far as diversity of voices goes, there may be some hopeful signs, but I think there's still much room for improvement. I also think that as much as I'd realized that making a career as a playwright would be no easier than making a career as an actor (in both cases, it's voiceover work that's paid my bills), I don't think I realized how difficult and isolating it can be to find community, which is so necessary (even more so!) as a writer. Coming at this after years as an actor, I have actor friends I can call on when I need to hear material read aloud, but there should be more institutional support for nascent playwrights to get to hear their scenes aloud. I've loved taking classes at Primary Stages. In addition to having excellent, working teachers, it's a place where they have opportunities for readings or just to borrow space and actors to hear things in a conference room, and without that I'm not sure how I would have developed. But classes are expensive and without that or the support of a graduate program, I'm not sure how an early career playwright gets that room to try and fail and stretch, so I think that there are barriers to entry that go beyond just programming decisions at big theaters. So I think there’s room for improvement there.

A:  I'm going to answer this in a more personal way- I didn't start out as a playwright. I took a playwriting seminar at Yale and then a wonderful class in graduate school with Ellen McLaughlin, but I didn't really attempt to BE a playwright until after I'd already had my first baby. And it's been a reality for me, as it is for a lot of women, that it can be very hard to have children and still have artistic and personal ambitions, and so my heroes are all the women who have demonstrated that this can be possible (or, at least that I'm not nuts to try). So my heroes are women like Stefanie Zadravec and Brooke Berman, Sarah Ruhl (whom I've never met, but who wrote a series of essays that inspire me), and your wife, Kristen Palmer, among many.

A:  I've always said that my favorite theatre is theatre that is fun and/or beautiful (which can be a terrifying kind of beauty). I came at this from having been a musical theatre girl. In that world, there's often a right and a wrong answer to the question "Webber or Sondheim," but I honestly was very split. I've come to love Sondheim, but I will still always pick Webber at the karaoke bar.

I worked as a stage manager on a production of Angels in America when I first moved to NY after college. I had no skills and didn't get paid, but I just really, really wanted to be near that script because that play is... obviously unbelievable. Working on it was a formative experience- the cast was wonderful and I just loved that feeling of working on something meaningful with people I genuinely loved.

As a spectator, I may never have another night at the theatre that makes me want to stop time just to keep thinking about what I saw the way I did when I saw Gem of the Ocean. And going back to the previous question about heroes? August Wilson. Definitely. His plays showed worlds I knew nothing about, and made me think about the world I lived in. Wendy Wasserstein is the playwright who made me wonder if I could write plays- seeing the Heidi Chronicles in high school was eye opening because it was one of the first plays where I saw someone confronting things that felt familiar to me. Because I came at this from having been an actor, I'm very aware that it's not just the playscript that makes a successful production. There are directors, like Simon McBurney, whose work would make me drop everything to search for tickets (as a side note, having been lucky enough to find Deborah Wolfson to direct this production of Hysterical! I've seen firsthand the positive impact a director can have- she manages not only to realize what I've written, but also to see what I've TRIED to write, and to make sure that that also is revealed). As for actors, I saw an understudy, Jerome Preston Bates, step in for Keith David in Seven Guitars, and he blew me away (and made me realize how many brilliant people are just waiting for their shot in this crazy talented city!). Michael Cerveris in Tommy. Sir Ian McKellen and Geraldine McEwan. Phyllicia Rashad. Lisa Gay Hamilton. This could take all day.

A:  Find really generous people to be around. I remember a classmate giving me the name of her voice teacher when I was a new-to-the-city actor. It stuck out because these kinds of acts of kindness seemed rare. In this industry, there are people who will be human beings and people who treat this as a cutthroat sport.

Having defined myself for so many years as an actor, it's taken me some time to be comfortable calling myself a writer, especially in the company of obviously talented writers who have started earlier and who have had more successes. That writing class I took at Yale was a class of ten. It included Itamar Moses and Quiara Hudes. So I have good reason to feel inferior. But when I first started writing, Itamar gave me one of the most generous, thorough and thoughtful reads of an early draft (when I really, really didn't know what I was doing.) I took it out recently to see if it was salvageable and it was TERRIBLE. But he took it seriously, which allowed me to take myself seriously and to keep at this. All the teachers and writers who have similarly shared their thoughts and dramaturgical instincts with me as I worked to find my own- I'm deeply grateful for them. And, of course, one of my first giggles post grad school was being listed in the credits of your Mask play playscript as having originated the role. So when you asked me to do an interview, I'll be honest, I was really touched. So, I guess I hope that I can be as nurturing as you all have been. And my advice to playwrights, to get back to that, is that while it's true there are only so many "slots" for productions, etc. etc, and that it's true that there is a lot still to be done to achieve gender and all other parity, that doesn't mean you have to be part of the shit show. Allow yourself to be a cheerleader and supporter for other writers, because there are many, many people itching to do the same for you.

A:  I hope if you're reading this before August 24th that you'll come and see the NYC Fringe production of Hysterical! Tickets are available through www.fringenyc.org or you can check out our website: www.hystericalplay.com As our marketing materials say, "there may be tears; there WILL be cheers."