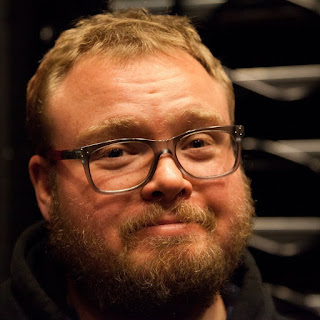 Q:  Tell me about Who Mourns for Bob the Goon?

A:  This play is dark comedy about a PTSD therapy group where everyone thinks they're third tier comic book characters. Specifically it's about vets who have coped with their PTSD by identifying with their lesser known comic counterparts as part of an untested (and maybe unethical) version of drama therapy. The group begins to unravel when a woman is admitted who believes she's from an anime, not a comic. The premise in writing was something very personal to me; I find that we, as Americans, often fail to mourn the lives who've impacted us the most.

A:  I'm writing two plays. School Bus Witchhunt and Copper Pirates. School Bus Witchhunt is a story about a school's administrative board going after a white parent because her son was accused of calling a black friend on the bus the n word. Copper Pirates is about a man who hunts copper (something extraordinarily common in poor communities) whose stash was raided. The thin thread holding his life and family together falls apart because someone stole his copper. Both stories are 100% focused on poor communities in America.

My parents were both indigent and very young when they had me and it took some time for them to transition into being 'parents.' Longer for my father than my mother... and my father's getting in trouble with the law in my early years reflects that. I have two very clear memories of this experience. I remember when my father was in court for sentencing and my mother telling me it was important that we showed up, as the court was more lenient if they saw a sympathetic family in attendance. Crying children help. I also recall the process of visiting him in prison, and -to a child, maybe 5-7 years old- it just felt like a trip or something special to do. "Oh it's Saturday, we're gonna go visit your father."

It took many years to figure out my identity as an adult and embrace the environment I emerged from. It took many years in NYC to realize how different I was to so many people in the communities I was involved in. It saddens and scares me how out of touch people in theater are with these large swaths of America who are living in or near what we would classify third world environments. The disadvantages my folks faced in my youth, including my dad getting in trouble with the law, were dictated by where we were and are headed as a society. The lack of opportunity and even hope that is dictated to the lower class in this country... I'm trying to change that. I was lucky in that, despite the disadvantages my parents had to overcome, they were always supportive towards me... and genuinely bright people. The idea that poor folks in this country aren't bright is a mistake too many people make.

I pursued writing as an act of defiance. My folks insisted as I grew up that I fought for whatever I could cling to that brought my happiness. Their theory was that life was going to be miserable no matter what I did, so the least I could do for myself was find a path/ career/ life that could have the potential to make me happy. My not giving up my hopes and dreams as a playwright is a subtle and consistent act of defiance and protest to our society at large and an act of honoring that mentality my folks imbued in me. Going into the arts or actively finding methods of self expression, is overtly discouraged in poor communities. I think of my father being in prison, how he got there and why, how my parents dealt with their circumstances in life, how they raised me... and it really is the best little anecdote that explains who I am as a writer, a person, and an activist.

A:  The aesthetics, the types of stories being told, and even the way theater is made is far too controlled by the mentalities of people who have had affluent lives. The sons and daughters of the upper class, and even upper middle, and even middle class, at some point took over the theater scene, especially the downtown theater scene, and have made it an impenetrable monolith.

If I could change one thing... well I would tear it all down. I'd find an army of people from poor communities across America and jam them into every board of directors, theater company roster, and artistic role I could find. I can't do that... so instead I created my own company that is expressly aimed at supportive voices from lower economic background. It's a start.

The stories that need to be told from these communities are so important, and can be so entertaining, enlightening, and engaging... that we just have to build the infrastructure to have them heard, and more importantly, produced.

A:  This is a very good question. Typically I feel like playwrights talk about who influenced them and not who their heroes are. I've been influenced by Beckett, Albee, and Miller among others... but who are my heroes...? Thinking...

Spalding Gray is one of my theatrical heroes. His mother's suicide and later his own... when you look at his life and work through the lens of someone fighting so hard against a psychological disorder, but losing to it... it rouses something in me. A strength to fight on, even knowing you may lose. And I've admired the existential empathy he conveys in all his work. Watching one of his monologues has always made me feel less alone in the world.

Yukio Mishima is hero of mine. That dude just did not give. a. fuck. His politics are complicated but his acts of defiance for what he believed in were unyielding. And similar to Spalding, Mishima was validated by genuine brilliance as an artist. I look to him for a personal reminder of what it's like to have totally converged artistic life and private life, and how there is honor and positivity in that. On the other hand, he presents a cautionary tale of how converging private and artistic life too much... to an extreme and inflexible place, can lead to ruin.

A:  Only theater that is uniquely theatrical excites me. We live in an age where there are a lot of mediums for telling a story. I have often seen plays and left asking myself, was this medium best suited for this tale. We have access to the technology to make podcasts, films, televisions shows, webseries, and so on... That's why I believe a theatrical piece should try to strive towards justifying why it belongs on a stage.

Ivo Van Hove's Scenes from a Marriage was a great example, so was Reid Farrington's Tyson Vs. Ali, other examples are Revolt, She Said, Revolt Again, SeaWife, and I could list many others. All of these very diverse stories from diverse artists shared one big thing in common, they could only exist on the stage. (*And I recognize the irony in writing that since Scenes from a Marriage was originally a motion picture, but in adapting it and using the Fefu and her Friends style story structure Van Hove and Emily Mann made something uniquely theatrical.)