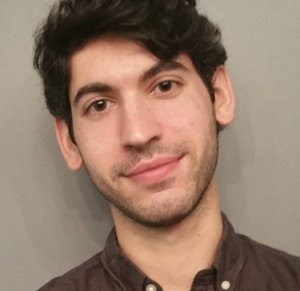 Q:  Tell me about your EST marathon play.

A:  My EST Marathon play, How My Grandparents Fell in Love, is about my paternal Jewish grandparents meeting and falling in love in Poland in 1933. My grandfather, Charlie, had immigrated to America in the ’20s, but he returned to the Old Country in search of a wife—and then he met my grandmother, Chava, who was working in a hat store. He ended up bringing her back to America with him, inadvertently saving her from the horrors of Nazi Europe. The play is a kind of immigrant romantic comedy set against a backdrop of oppression and fear. And the characters of my grandparents speak like contemporary American young people, with “likes” and slang and profanity. I was interested in using my grandparents’ story to reflect on the experience and struggles of immigrants in today’s world. The show is directed by the brilliant Colette Robert and features the dazzling duo of Eli Gelb and Lucy DeVito.

A:  Right now I’m working on a new full-length play, based on my Marathon one-act, called Hoboken 1953. My Marathon play, How My Grandparents Fell in Love, is about my grandparents meeting in Poland in the 1930s, and Hoboken 1953is set in Hoboken, New Jersey, and centers on their son, who’s based on my late father. It’s a romantic comedy-drama about immigrants and their children—and cultural clash—in 1950s America. We just had a reading of the first act at EST on May 30, directed by Colette Robert and featuring the dream cast of Lucy DeVito, Eli Gelb, Lou Liberatore, Shawn Randall, Patricia Randell, Jonathan Randell Silver, and Jennifer Tsay. With this piece, I’m excited by the opportunity to continue tracing my family’s history and using it to explore larger issues of identity and culture and assimilation in America.

A:  When I was a kid—4, 5, 6 years old—I had separation anxiety. I didn’t want to go to school and be away from my parents, and I would cry and scream and freak out about this on a regular basis. So my parents took me to see a child psychologist. I don’t remember much about our sessions except that the psychologist and I played games like pick-up sticks, and she would take me out to the backyard to feed her rabbits. Eventually, somehow, my separation anxiety went away, and I was able to go to school without a problem. But I think deep down I’ve still always had this fear of separation, this need for connection, this obsession with people not going away. And in some perverse, ironic act of self-punishment, I chose theater, the most ephemeral of art forms, as my craft. When you write a play, you put it up front of an audience, and then they go away every night. Eternal separation anxiety!

A:  I mean, hundreds of playwrights have already given this answer, but I’m going to join them: I would change the economics of theater. Exorbitant ticket prices make theater available only to the privileged few, so we keep seeing the same kinds of plays tailored to those audiences. And on the artistic side, the fact that hardly anyone can make a living solely as a theater artist is another huge problem. I know plenty of very intelligent people are aware of these issues, and I don’t pretend to have any solutions to them, but I’d love to see conversations continuing to happen about how we can change the model. The idea of an affordable, diverse, democratic American theater and a community of artists who can make enough money to live on is so exciting—especially in today’s troubled times, when we need good theater more than ever.

A:  God, I have many theatrical heroes, but here are a few of them: Annie Baker, Kenneth Lonergan, Stephen Adly Guirgis, August Wilson, Stephen Sondheim, the great Yiddish dramatists of the early 20th century. Also my incredibly talented fellow members of EST’s Youngblood program for emerging playwrights under 30, whose work consistently inspires and challenges me. And the two co-artistic directors of Youngblood, Graeme Gillis and RJ Tolan, are heroes of mine too. They’re wise mentors, wonderful friends, and two of the hardest-working men in show business. Without them I’d be nowhere, and I think a lot of young playwrights who’ve come of age at EST over the years would say the same thing.

A:  You know, this is kind of a weird answer, but lately I think I’m just most excited by theater that focuses on specific, complex characters who feel like living, breathing human beings. I guess I’m less interested at the moment in work that’s driven by intellectual conceits or theatrical cleverness. Especially in this political climate, which is so full of generalizations about whole groups of people, there seems to be something inherently radical in simply writing about individual humans with thought and care and precision. When I see a good play, I can almost always feel the love of the playwright for their characters. That humanity shines through. It may sound corny, but for me it’s true. Right now that’s the sort of writing that moves me the most: plays that eschew bells and whistles in favor of fashioning flesh-and-blood people.

1. Write. Write as much as you can. Finish drafts. Always be on to the next play.

3. Find an artistic community. It can be at a theater or in a writers’ group or wherever, but it’s so important to find people you’re simpatico with and know you’re not alone in the struggle.

4. Build relationships with directors. Directors who get your work can help you become a better writer and make your plays come alive. And they can also help you get your foot in the door at theaters.

5. Apply to everything: fellowships, residences, contests, development opportunities. Keep a master list of application deadlines and check them off. You’ll probably get accepted to one percent of the things you apply to, but that one percent could change your life. If you're under 30, apply to EST/Youngblood!

6. Don’t give up. You’re a playwright. The world just might not know it yet. But they will.

A:  There are three performances left of my play How My Grandparents Fell in Love in Series A of EST’s 36th Marathon of One-Act Plays, through June 5. They’re sold out, but there’s a wait list, and you stand a decent chance of getting in. And then you catch more fantastic one-act plays by writers both established and emerging in Series B and C, which run through June 30. Don’t miss them!