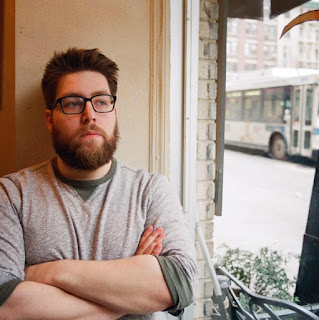 Q:  Tell me about Jessica.

A: Jessica goes up July 22nd-August 6th at IRT Theater and it’s being put up by the absolutely phenomenal people at Sanguine Theatre Company. The play’s about a group of people attempting to bring back a close friend with Artificial Intelligence. But before long it becomes apparent they have different ideas of who this person was and what elements are important in reconstructing her. Thematically, it’s about consent, friendship, and how we allow our friends to define us during and after our time with them.

The play started as a genre exercise because I wanted to try my hand at writing science fiction for the stage. I really enjoy old sci-fi movies where limited technology and budgets required a greater level of creativity in how these larger than life ideas were displayed. It’s unlike anything I’ve ever written or explored before and it’s consistently surprising to me how personal the play has become. It’s simultaneously frightening and exciting.

A:  I’m finishing up a play called Circle of Friends, about abuse and social cliques, which will have a reading through the Pantry Theater Company in the near future. I’m part of a sketch team called New Greta and we’re trying to put up a brand new sketch show in the next two months. And I’m working on a bunch of other new plays but the one I’m most excited about involves exploring the surprising amount of crossover behind YouTube Celebrities and the Alt Right.

A:  First thing that comes to mind is visiting my grandparents in Arizona at the age of 6 or 7. My sister and I used to put on elaborate puppet shows and I mean really elaborate. These things had multiple scenes, continuous plots, and were at least thirty minutes long (my poor parents). I remember distinctly we did like a season finale at my grandparent’s house once where one of our puppets gave birth to another puppet in a six year old’s interpretation of a labor scene. There’s video of it and you can hear my dad say “where did they learn about this?” Somewhere between the joy of making those shows with my sister and the fact that everyone had to pay attention to us for at least thirty minutes explains the person I am today.

A:  It has to be more accessible. Not just in price, but subject matter, length, and actual physical accessibility. Anyone who wants to see a show should be able to see one, and anyone who’s skeptical should at least be given the chance to make an opinion in person.

A:  I got two. Annie Baker and J.B. Priestley. I know that a playwright saying they like Annie Baker is like a dude from 90s Seattle saying he likes Nirvana but she’s affected me the most. Her plays ring so true for me and I’m eternally inspired by her ability to make dialogue that’s so real and awkward but still manages to devastate you when you least expect it. Her play at Signature this year, The Antipodes, has encapsulated what it feels like to be alive the past year and a half better than anything else I’ve seen.

J.B. Priestley was introduced to me by my professor and mentor, Stuart Spencer. Every one of his plays is like a master class in form and everytime I want to explore a new way of telling a story, I’ll revisit his works to see how it’s done. This is going to sound really silly but Time and The Conways might have been the first time I “got” theater? Or at least the first time I read a play that I knew couldn’t be performed anywhere else besides the stage.

A:  Plays with momentum. I’m a sucker for all one place and time if it’s executed well. Also, plays that find new ways to invoke the audience whether it be a different seating arrangement or full on participation. I studied audience participation for a semester in college and it’s actually really sad how negative our association with audience interaction can be. Some of the best work I’ve seen have involved the audience in new and exciting ways. Back in school, these two students Jesse Heffler and Joe Faragher put on a wonderful piece about Jesse’s experience on his Birthright trip. I remember purposefully sitting in a non-participatory zone at first but became involved before long and loved every second of it. Every piece of audience participation contributed to the greater idea of discomfort on this trip and it was told in such a brilliant way. Now I seek theater that gets the audience involved in ways that are not only fun, but significant to the story being told on stage.

A:  Ok, with disclaimer that I am probably not the best person to give advice to anyone, I’ll say these are the things that have helped me the most so far:

Be friendly! This one is actually just directly advice to myself because I psyche myself out a lot. Go to readings, befriend other theater makers, introduce yourself, offer to help others in their artistic pursuits.

Good friends are the single most important thing to your career. I can’t tell you how many things I’ve booked thanks to a watchful friend who was looking out for me. Having people who will read your play and give you feedback, who will help direct or act in your small productions. These are the most important people in the world and they’ll be the people you work with the longest.

Self-produce! And I don’t mean waste all your life savings on one production and hope it’s your big break. Put up small stuff. Take advantage of your surroundings. Put up cheap theater, take photos and video. Don’t produce just to have a production. Put up stuff you’re excited about. If it’s exciting to you, it’ll be exciting to others.

A:  Jessica goes up July 22nd - August 6th and tickets can be found here: http://irttheater.org/3b-development-series/jessica-by-patrick-vermillion/

The Pantry who I’ll be working with on the reading: https://www.facebook.com/thepantrytheatre/

And my troupe, New Greta, we got a monthly show at The PIT Loft! Come check us out: http://thepit-nyc.com/event/2017-06-28-new-greta-has-friends