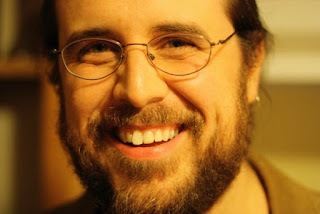 A:  Right now I’m working on two scripts and a bunch of small non-fiction projects.

Swandive Theatre in Minneapolis is set to stage my new show: THE CANOPIC JAR OF MY SINS: A MEDIEVAL MORALITY PLAY FOR LATTER DAY POSTMODERNISTS. I’m a little breathless about what they’re planning to do with it. I put the last few changes in and am just letting it cool off a bit before sending to the producer and director. The show follows the scientist Ralph Wiley (the inventor of plastic) who is forced to undergo a Stalinist show trial held on the vast island of plastic garbage in the Pacific Ocean. The trial is adjudicated by an angel, a dead bird, and Rodger Waters. Things get strange from there….

I’m mid-way through another full length play PALIMPSESTS OF AGRIPPINA MINOR. Agrippina was a Roman empress and directly related to the really gross emperors. She’s Caligula’s sister and Nero’s mom. I became fascinated with her, because her enemies wrote the history books, and I wanted to know who she really was. A palimpsest is a text that is bleached off the page and then written over. It’s a good metaphor for her life. She’s a lost classic. The play lets me explore what she must have been like. She must have been smart, brutal, lonely, charming, and terrified. She navigated the treacherous seas of imperial power, as her family members murdered, exiled, and intermarried one another. Simply surviving as long as she did merits acclaim, but she clearly rose to power and was de factor emperor for about six years—not coincidentally, the most stable years for her entire dynasty.

When I need a break from all the drama, I usually turn to prose. I’m an artist who works in language, so when I need an escape from scripts, I turn to other modes of writing, instead of acting or directing. In between drafts of scripts, I’m always working on a few short, non-fiction essays. The one currently on the top of the pile is about finding and following an abandoned road in rural Arkansas and the 70’s-era surrealist poet from the Ozarks, Frank Stanford.

Q:  Tell me about the program at the University of New Orleans. What can playwriting MFA students there expect?

A:  They should expect one hell of an adventure! The Creative Writing Workshop (CWW) is very rigorous with high academic and creative standards. It’s also very flexible; students can work across genres, and across campus. My playwriting students often enroll in a host of theatre courses and creative writing courses, but occasionally sneak into other disciplines. I can think of students who’ve done some coursework in history, music, and arts administration. I’m always amazed at the supportive and collegial culture we’ve built at UNO. It’s a culture that respects both individuals and aesthetics, which lets us all be sincere allies. There’s a great genialness in our MFA. We foster talent by building our students up instead of having two-bit infighting. Consequently, our students leave sounding more like themselves than like each other or like me.

I’m a big believer in writers getting a lot of cross-training and working in different genres, after all genre is really just another tool for crafting art. At the end of the day, the CWW makes good writers. It’s easy to brag about the place that pays me to talk about stuff I love, but the evidence is in the outcomes. Our students publish and produce at a high rate, and our grad students have outcomes that compare with much more prestigious programs. Plus, this is New Orleans, so when one needs a break from the solitude and labor of writing, there’s always a party to go to. Often six.

Q:  Tell me about the New Orleans theater scene.

A:  The New Orleans theater scene is very open and welcoming. When I moved here in 2012, I knew almost no one. I emailed every artistic director I could find with a Google search and introduced myself. I heard back from most of them in 48 hours. All of them in a week. By the end of the month, I met each of them, and Aimee Hayes at Southern Rep offered me a reading. The theatre scene, just like the city, will embrace you if you’re open to it. But there are struggles here. Mardi Gras provides a layer of joviality and performance that can spiritually nurture lots of theatre makers; however, it is also a vacuum that sucks up the community resources that would normally go to support the arts in most other cities. Of course, since Louisiana is a deep red state, the economy never quite works; there’s a lot of poverty, and almost no public funding for the arts. There’s nowhere else like New Orleans, but because the city is inside Louisiana, we often operate like the best beach on Lord of the Flies Island. That’s a shame because Louisiana is lush with resources and could have the highest quality of life in the country with a thorough legislative overhaul. For ambitious theatre makers with a strong DIY methodology, New Orleans can be a very fulfilling place. For people looking for conventional models and conventional funding, it can be very frustrating.

Politics aside, I’ve seen plenty of excellent theatre in New Orleans. One of the first shows I saw here, when I knew very little about the scene, was Goat in the Road’s Instant Misunderstanding. While applauding at the end of their show, I thought: I’ve seen worse things than this win an Obie! My concerns about moving here were assuaged. Years later, I had the good fortune to see Grounded at The Public and here at Southern Rep, and I found the local production far more visceral and evocative than the one in NYC. I had a similar experience with Airline Highway. In fact, I’ve only openly wept during three or four shows and probably stood up to applauded less than a dozen times in my entire life. The only show that ever made do both was Alleged Lesbian Activities, which originated here but has (I hope) quite the future ahead of it.

A:  As someone who started exploring memoir a few years ago, I’ll fight the impulse to give you a full-on essay here. However, there was an important moment that seems relevant. I was a senior in college, walking across campus and thinking about what to do after I graduated. I was a double major in English and philosophy. Writing was my passion, but I knew poetry wasn’t going to pay the bills. I thought about all kinds of careers to pursue. I thought about archeology since I liked discovery and exploration. I thought about law because I liked thinking and arguing. I thought about publishing since I was deeply into books. While weighing the pros and cons of every option I could think of, I realized I kept coming back to the same question: How much time will this profession give me to write? That question pointed me to grad school for creative writing and a path I’ve been on ever since. Sometime not long after that epiphany, I started asking myself another fundamental question: Will X make me a better or more successful writer? When I answer “yes,” I try and take action X. When I answer “no,” I try to avoid X. While such a question is a far-from-perfect system, it generally provides a good light to steer by.

A:  If I had a magic wand to weave, I’d change American theatre into a place that embraces risk and pushes aesthetic boundaries. Simultaneously, I’d make patrons and donors similarly engaged, motivated to see things that they have truly never seen before. In other words, I guess I would remove our cultural fear of the profound and let that societal change ripple through our artists and institutions.

A:  I suppose Ionesco and Mac Wellman really pulled me into theatre from the world of poetry, where I started. And since then I’ve been sustained by scions like Adrienne Kennedy and contemporaries like Sibyl Kempson.

A:  My favorite moment is walking out of the venue asking: What the hell was that? If I can put a show in an aesthetic box, I’m disinterested. My mind lights up when I have to process the unknown; encountering the unknown leads to something nearly divine. If one’s so inclined, almost any line from Martin Buber could probably go here as a witty little bon mot.

A:  Write for the love of writing. That love is all that can really sustain you on the road ahead. Then, don’t stop. Obviously, one should do all the basic professional things to get their work in front of an audience, but at the end of the day, if you don’t love the time at the desk, this path will never lead to deep joy. When I first got to grad school, the director of the program said something along the lines of: Thank you for dedicating your life to writing like a monk dedicates their life to religion. That comparison stuck with me. When I’m lost or unsure in life, I can look at what a monk would do, and if they’re doing something monk-ish, I should probable be doing something writerly.

A:  Gestalt Theater is producing AN OUTOPIA FOR PIGEONS in Riverside, CA. It opens on March 29th at The Box. http://www.gestalttheatreproject.com/current-production.html

Swandive Theatre is producing the world premiere of THE CANOPIC JAR OF MY SINS: A MEDIEVAL MORALITY PLAY FOR LATTER DAY POSTMODERNISTS in Minneapolis, MN. It opens in early October at The Crane Theatre. http://www.swandivetheatre.net/

The Tank and Clever Girl Productions are producing AN OUTOPIA FOR PIGEONS in NYC. It opens in October at The Tank Theatre.

One can buy a collection of my wild short plays here: https://www.amazon.com/Blinded-Horse-Dreams-Hippocampi-Other