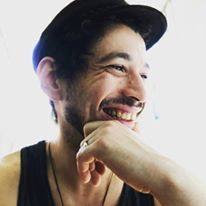 A:  At this very moment I’m challenging myself by writing my first musical. It started as an experiment on my plane trip from the INGENIO New Play Festival. Now I’m in love with it and can’t wait to finish it and see what doesn’t work! It’s an exploration of colorism and race relations between latinx and african americans that merges Bolero and Blues to tell the narrative. I don’t know how great it will be, what I do know is that I’m having fun. I’m also currently planning a public reading for a new full length “Misfit, America: An American Western With Color,” working on a whole new draft of “Paper Towels” for a production in May, and doing rewrites for my play “Into The River I Went” after the public reading set by Troy Foundry Theater in October. Exciting year ahead!

A:  I was almost a teenager, but I remember distinctly a moment in eighth grade with the Spanish teacher. It wasn’t her fault, I was a smart ass kid that would spend most of his time arguing with her. For some reason we got along, I just didn’t make it easy for her. So one day she made us all write a poem about the Puerto Rican flag. I kept joking around with my friends in the back, thinking it was lame. That she was just being lazy. She called me out and challenged me. I remember like it was yesterday, wow, she said to me that if it was so easy how come I wasn’t doing it. Or was I dumb? That bothered me, so I did it. Out of pure defiance. I used to read a lot, I loved writers, just never thought I could be one. I come from a low-income household in central Puerto Rico, people didn’t think they could ever do things like that and it's the reason she called me dumb. Anyway, next thing I know she entered it into a poetry competition without my permission. I was angry at her, I didn’t want anyone else to see what this jibaro wrote. The poem ended up getting second place. So yeah, I became a writer because of defiance, but also because she somehow believed in me. She just knew the only way to make me do stuff was to push me. If that doesn't explain me as a writer and as a person, I don’t know what does.

A:  The perception people have of it. It plagues everything around it. This idea that the theater is mostly for predominantly white and for an older audience is what keeps it predominantly white and for an older audience. Most production companies become afraid of that, so they keep themselves safe, and keep diversity to a minimum. Because of that perception, plays that would appeal to other audiences do not get staged. Because plays with diverse casting don’t get staged as often, actors of that particular race battle for fewer roles and become discontent. Which means less actors audition, which means a play needing those actors can’t find them… you get it. If we are going to diversify and make theater more inclusive, then we need to change the perception. We do that by producing people like Guadalis Del Carmen, Andrew Rincon, Gina Femia, Matt Barbot, Jeremy O. Davis, Inda Craig-Galvan, etc.. The list goes on. You know how many times I’ve gone to a show with someone that despises theater and have seen something like “Fireflies” by Donja R. Love leaving the person I’m with awe-struck? Let’s change the perception, let’s produce these writers.

A:  Edward Albee, Miguel Piñero and Maria Irene Fornes are my foundation. Stephen Adly Guirgis, Martin Mcdonagh, and Paula Vogel were my coming of age. Now I get to know my heroes, writers like Georgina Leanse Escobar, Diana Burbano, and all the writers I mentioned before. They inspire me daily.

A:  The kind that dares to explore reality through the magic that exists within it. It could be subtle as the aforementioned “Fireflies” or completely out of this world like “Alebrijes” by Georgina Leanse Escobar. Plays that dare to go all the way just to tell what is essentially a very human story.

A:  Go out, watch as much as you can, meet as many people as you are able to. Surround yourself with beautiful people that make you want to be better. Competition is with yourself, not them, they will help you improve. Drive is what your ambition needs, not greed. And love your work. Every word of it.

A:  *Ham Horn* Coming soon is my play “Paper Towels,” which will be playing at the Downtown Urban Arts Festival on May 1. A whole new version from the ones seen at The Brick and the EAT New Work Series. The Parsnip Ship will be releasing the recording of my play “World Classic” on streaming services, and the short “I Saw Jesus in Toa Baja” will be part of the William Inge Festival this summer.