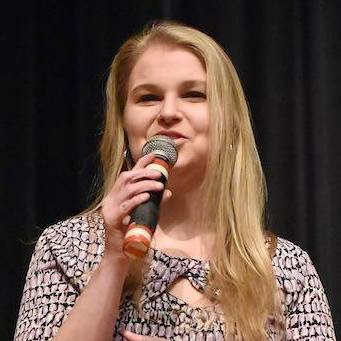 A:  What am I NOT working on right now would be a better question????

I just finished up an extremely successful speech competition season with my students at Siouxland Christian (our tiny school with an enrollment of 68 just secured our second Critic’s Choice Banner in the area of one act, making us the first school in the history of the program since 1982 to be named the top one act in the state of Iowa twice in a row). This was achieved our first year with my one act “Back Cover,” and this year with my one act “The Cages We Build.” I am currently working on creating a full length play that I would feel comfortable submitting (right now, the only place I’m comfortable putting my full lengths is in the garbage disposal). I am also writing a one act for my middle schoolers (all twenty-six of them!) as well as the one act for my high schoolers next year. I am also trying to stay alive, but that’s been sort of placed on the backburner for the time being.

A:  When I was in third grade, we were learning about writing using quotations. I wrote a story about my family during a thunderstorm (for whatever reason, I can still remember my opening line--"YIKES," Emily said as a bolt of lightning streaked through the sky.) My third grade teacher, who spent most of her time glaring at me because I liked to walk around the classroom without my shoes and had the habit of rolling my eyes every time we had to do math, pulled me aside before class began. Naturally, I assumed I was going to be chastised for my eye-rolling, shoeless ways. Instead, she asked me, “Would you mind if I read this to the class?” Baffled, I said yes. She read the entire short piece for my class and praised me for my creativity and descriptiveness. I wasn’t a popular child. I wasn’t athletic or particularly good at anything. But in that moment, I was heard and I was understood, and I’ll never forget it.

A:  I want there to be better roles out there for young people, and for women. I want women to be allowed to tell their own stories, not to have their experiences explained for them. I also am desperate to get better scripts in the hands of young people. I truly believe that high school age actors should have opportunities to act in plays where they get to play their own age, but also where they get to explore modern issues. I am really tired of seeing the same plays getting produced over and over again. Teenagers need to be able to do plays where they feel like their voices are being heard--they desperately want to tell noble, important stories. Our best playwrights should be writing for high school. It is an incredibly worthy endeavor.

A:  I love the work of Arthur Miller. Reading Stephen Karam’s The Humans changed me as a writer. I am a huge Charley Evon Simpson fan. Jennifer O’Grady is one of the best people I’ve ever met, and she is also a magnificent playwright. And beyond that, there are truly too many to count and list.

A:  Write what YOU want to write. Don’t worry so much about getting produced. Try not to sweat the rejections. I view any production I receive as an honor. It’s incredible to have your voice picked out as being valuable, and heard. Determine why you are writing and go from there. Let yourself be inspired by the people around you and their incredible stories. Write as a gift, expecting nothing in return.

A:  On March 10, my play “The Orchid” was performed at the Dramatists Guild of America for their “Talking It Out” event, which is a series of plays that have to do with mental illness. Many high schools across the country are performing my plays--"Back Cover," my award winning one act, being the most popular choice (thirteen productions and counting!), but I’ve also had “Character Arc,” “Something Profound,” “One Seriously Ugly Duckling” and “The Thought Doesn’t Count” picked up by Universities, High Schools, and Middle Schools. I also recently had my play “Everafter.com” published by YouthPLAYS.