A thing I wrote about Kodachrome 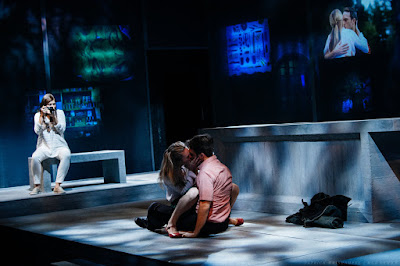 Here is a short essay I wrote for Sam French's magazine about my play Kodachrome.

My Town: Adam Szymkowicz on Kodachrome

Most of us have lost someone. Some of us a lot of someones. The longer you hang around the earth, the more people you lose. So when I see a young woman crying during intermission during a D.C. workshop production, I assume someone she loved died recently, because the play is in part about grief. And that monologue towards the end of the first act of Kodachrome drops shivers down my spine every time and I assume her tears have something to do with that part. Although, honestly it's not the only part where people cry.

He turned down his scholarship. He took over the family business. The future Librarian went to college. And then my baby came and she was stillborn. We mourned. Instead of driving us apart, we grew closer together. After two more miscarriages, we stopped trying. The future Librarian came back from college and got a job at the library. And then life and life and life. Until four years ago when I came down with bone cancer and then two years ago when I stopped being alive.

I wonder sometimes why I write so much about grieving. I've had some death, but not as much as many people. I guess I think about tragedy more than most people and live in a somewhat constant fear of something happening to my loved ones. I also think and write about love a lot — new love and long-lasting love and love that never was. I guess these to me are what being human is — having love and losing love and wanting love and connecting to other people. Kodachrome deals with a lot of different people falling in and out of love at different times in their lives. It’s a play that takes place in my home town of Colchester, CT and the locations described are real places that you could visit. You probably wont be able to find the people from my play walking around town, but part of what the play believes is that there is magic in the mundane so you may be able to find folks like this wherever you are right now.

I started writing plays over twenty years ago. I am currently writing my 50th play. And some of these plays are hard to write and some of them come easy. Some of them, especially early on, were not so good. Kodachrome is, I think, the best play I’ve written. It also came to me pretty quickly and was mostly enjoyable to write. Maybe because I love these people and maybe because I tapped into a nostalgia inside me I didn't know was there. “The Perfume Maker” was a character I thought of long before the play but I never knew what to do with him and when this play came along it turned out, he lived in it. Everyone else was already there waiting for me to finally write, I suppose, about the world I grew up in, albeit with a slightly magical lens.

I’m very excited this play has already had so many productions, at high schools and colleges and in small theaters and professionally in a very beautiful production at Portland Center Stage. This play is most often compared to Our Town but if we are making comparisons, I liken it more to Almost, Maine because of both subject matter and flexible cast size. But I see what they are saying. Structurally, Our Town is a more apt comparison, although Kodachrome is less existentially bleak.

I'm very fond of this play and of the productions I've seen so far. The producers and actors and directors and designers and crew who have built this world have come with full gentle open hearts and I'm grateful to them and excited for you to see it too. I don’t know. I like it. I hope you will too.