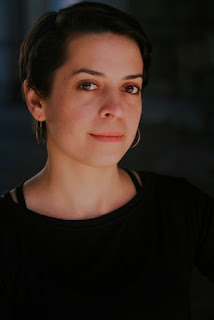 Q:  Tell me about the play you just had published with DPS.


A:  The play I just had published is A PLAY TITLED AFTER THE COLLECTIVE NOUN FOR FEMALE-IDENTIFYING 20-SOMETHINGS LIVING IN NEW YORK CITY IN THE 2010s, haha, which (I hope) speaks to what it is. It's a Brechtian response to narratives that purport to be about "girls," particularly millennial young women living in a coastal urban center. All the young women I know who are technically that demographic are rabidly intelligent, profoundly politically engaged, and incredibly astute as to how the patriarchal capitalist world is operating upon them (even if they/we can't figure out how to escape that pressure), and yet media mostly just shows us as childish narcissists who can't get their shit together about men. So I wrote about the young women I know. But the play is also more generally about all millennials' unbearable anxieties, staring down a totally uncertain future, and how we can hold on to hope for saving what's best about humanity--borderless community, mutual aid, intellectual inquisition, art.

A:  My primary project is a play about the parallels between the Iranian and Cuban revolutions, and the effects of American geopolitics throughout the 20th century on our conception of identities; it's about how the material consequences of political borders (including economic borders, e.g. sanctions) manifest differently for individuals depending on class, gender, physical appearance, etc.
I also have an Ibsen adaptation in the works I started for a specific director but then got super excited about personally, and a couple adaptations of texts translated from Farsi: an Evin Prison memoir by a communist woman and a meta-play by a radical Iranian writer written in post-Revolution Parisian exile.

A:  Not a story per se, but recently I found in some of my mom's saved papers from my childhood a book report I wrote in maybe 3rd grade; whatever book I read was about the history of wild mustangs in America, and for a solid 4 pages I take adults present and historical to task for allowing millions of mustangs (this is true!) annually to be slaughtered by ranchers or otherwise horrifically injured and left to die to keep land open for cattle grazing and oil drilling.

A:  ONE THING ONLY? I would get rid of the reverence for Broadway as arbiter of theatrical standards. Maybe a more positive way to frame this is I would revive the Off-Off-Broadway scene as its own flourishing identity. (And not center it in Brooklyn; let's distribute wild theater across the boroughs, and the country.)

A:  I call Arthur Miller my favorite playwright and I've spent many years engaging in my work directly with Brecht's theories, but I tend to have plays that are theatrical heroes rather than playWRIGHTS. Antoinette Nwandu's PASS OVER is a hero, AN OCTOROON obviously, Churchill's LIGHT SHINING IN BUCKINGHAMSHIRE, Fornes' FEFU, Hellman's WATCH ON THE RHINE, Pinter's THE DUMB WAITER, most shows by Elevator Repair Service...

A:  I'm most excited by theater that has no idea what theater is supposed to be. Or, theater that knows exactly what theater is "supposed" to be and actively, intentionally resists the subjugation. Theater founded in exploding the boundaries of theater, and of what we call society.

A:  Read things that are not plays! Read fiction and poetry, read the news, read smart criticism of other art forms. See plays all the time, as much as possible for what you can afford. See things you've never heard of, see things by artists from cultures and backgrounds you know nothing about.
Also, learn how to send a good cold email--everything in this industry runs on sending and receiving cold emails.