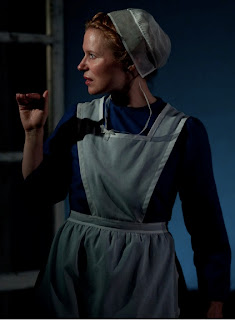 Q: I've heard a lot of great things about the Amish Project from various people. Can you tell me a little about the show?

A: The Amish Project is a fictional exploration of a true event, based on the Amish schoolhouse shooting that occurred in rural Pennsylvania on October 2nd, 2006. It is a solo show, with seven fictional characters, including the gunman and the gunman's widow, two Amish girls, and three townspeople... I was heartbroken by this gruesome event-- it struck a strong impulse to write, to just WRITE into that heartbreak and see what I could find -- but I did not want what I wrote to be tied in any way to the real people, so I basically took some of the givens of the tragedy and created my own characters around it. The New York Times recently likened this to writing "Stories From 9/11 That I Just Made Up", which I thought was a hilarious and great way to say it. I have a great respect for documentary theatre, but that was not what I was after when I started writing the play.

Q: How did you come to write it?

A:  I first researched a great deal about Amish culture. I grew up in rural Pennsylvania, about an hour and half southwest of where the real crime occurred, and while I was not in the vicinity of an Amish community, I have always felt an affinity for "plain people" in general... I am very curious about people and communities that separate themselves in order to pursue their spiritual beliefs. There are many figures of this ilk that have fascinated me-- Saint Francis of Assisi, Gandhi, Julian of Norwich, Dr. James Cone... So I find the Amish intriguing because of their seclusion and spiritual discipline, and the ways in which they maintain their ethnic identity in our modern world. And when this sacred, quiet community came under attack in the schoolhouse that day in October, a fascinating series of events were set in motion, with shocking and awe-inspiring results... These things stayed with me, haunted me, and I wanted to go inward and explore what they evoked.

Q: What does your writing process entail?
A:  Oh I don't know! LOL. Writing in my journal on the train, listening to a character riff... I usually need to do research of some kind--- I am currently working on a new play that had me researching the Omarska concentration camp in Bosnia (of the early 90's)... I like to let my characters monologue at first-- I like to just give them the mic, as it were, and see what they have to say, what they seem to be stuck on or circling around... Then at some point it becomes clear that this series of characters are all occupying the same psychic space, trying to inch toward one another, and then it becomes a matter of identifying what they are trying to do-- both to one another and as a collective whole. The play takes form from that void.

Q: Do you change the play sometimes in performance or is it pretty well set?

A: Noooo, it's pretty well set. I love to improv, and I definitely spent a good portion of our tech riffing for the production team! LOL! I would improv from the characters while they were adjusting a light cue or working on something while I stood there on stage (I am a total slut for their laughter)... But when it comes to the performance, I keep pretty strictly to what we have set as much as possible. It's just the stage manager and I every night, and we need to trust each other to maintain the integrity of the piece as we cue one another through the play. I also find pleasure in the dance of a performance as much as anything else--- I attach myself to the subtle body anchors--- the weight shift, the focal point of the eyes, the breath. These are my tethers.

Q: This is not your first solo show is it?

A; Oh it definitely is.

A:  You know, more and more I am NOT interested in theatre with answers. I know this sounds elementary, but it apparently needs to be said. I also don't need art to be perfect or agreeable or for everyone. I feel like sometimes there is this pressure to make a piece of theatre thoroughly digestible and "clear" and linear. Who made this rule?!! I like it messy-- truthful-- theatre that is not afraid to go toward complex terrain and leave us with powerful questions. And I don't mind when theatre has a specific audience and isn't afraid to speak to that audience; like, you're a gay man and you want to speak to your community of gay men-- go for it! The rest of us can listen and learn and find ourselves in there if we wish. Do you know what I mean?!!? I'm just sick of watering things down to make them palatable. Fuck palatable. And while I'm bitching, I could do with a lot less irony and cleverness and cynicism. Okay, I'm done.

Q: What advice would you give to any playwright who might read this who doesn't know some of the things you might know?

A: Oh boy. I'm sure I am totally UNQUALIFIED to be doling out advice. I feel like a messy toddler with playwriting. Um... I guess I can definitely say this: Don't wait for someone else to "discover you". Discover yourself! Don't be afraid to put your own work up on its feet. Use the festivals, the forums around the city, do it yourself. It's a self producing market now. Roll up your sleeves, raise the money, and present your own work. It's actually a thrilling thing to do. And it bears fruit-- externally and internally.

Q: What is the information for people who want to go see your play?

A:  Rattlestick Playwrights Theater, 224 Waverly. Our schedule is Mondays at 8pm, Wednesdays thru Saturdays at 8pm, and Sundays at 3pm. We're there 'til June 28th, and the show is only 65 minutes, so get your butts to the theatre! www.rattlestick.org and www.amishproject.com
Posted by Adam Szymkowicz at 6/17/2009 08:41:00 AM