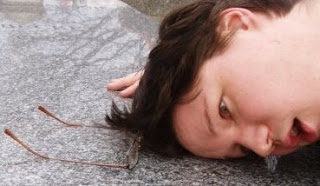 Hometown: I’m from all over. Grew up in PA, mostly.

Q:   So tell me about this new play you have going up.

A:  It’s called Glee Club. It’s about a group of men who want very much to sing well, despite their obvious, crippling flaws.

Q: Are you going to be sued by Fox?

A:  I doubt it. I heard of their show well after I started working on mine. And mine is called Glee Club. You see the difference there?
What’s odd is that I’ve never heard of a high school “Glee Club.” I usually hear about high schools having show choirs or jazz choirs or whatever. Choirs. Glee Clubs, in my experience, are generally for adult hobbyists or colleges.
But what do I know? I’m just this guy, you know?

Q: You know that TV show was co created by a NYC actor who was in a couple readings of mine. Cool guy.

A:  Didn’t know that. I thought this interview was about me, though. You’re bringing up the TV show and how you know people that worked on it. Would you rather talk about TV? It’s making me feel uncomfortable. I’m sweating a little. It’s like you’re just using this to name drop. Do you even really care about me at all?

Q: Do you think you're better than him?

A:  Well..yes. I think so. I mean, I don’t know the man, but it’s my default response to strangers.

Q: You work with a lot of the same actors over and over. What are the pros and cons of that? Can I assume Matt Trumbull is in this?

A:  He is. He’s awesome. So is David DelGrosso. Every actor in the show is someone I’ve worked with prior to this production.
I can’t think of any cons really. I love the guys I work with. They’re brilliant. I’m always looking for new people to add to my mental list, but I already know a ton of really spectacular actors. I believe in them, they believe in me, we all do our best for each other. That’s what it’s all about.

A:  No. I just wrote it. I sit in the back and eat ice cream and watch them sing.

Q: Oh. Well then when is the next time you're going to be in a play I can see, preferably about your life, starring you?

A:  Probably never again. I did it before as a joke on pretentiousness. Doing it again would be, well, actually pretentious.

Q: What kind of theatre excites you?

A:  I don’t really know. Whatever has a lot of life, I guess. I don’t like watching plays that feel like exercises in certain theories, or try to impress us with their dexterity. I like watching writers who appear to be enjoying themselves. Some of the darkest plays out there have a real passion in them, virtuosity. Some guts. I like theater that’s got internal organs.

Q: And this show is with Blue Coyote. How many shows have you done with them? The last one was published by Samuel French, right? Where could people buy that? (link please)

A:  Um… this is something like my eighth production with them, if you count smaller stuff.
The last one was published by Samuel French. That’s called When is a Clock. You can buy that one here: http://www.samuelfrench.com/store/product_info.php/products_id/7515

Q: Many of my readers are playwrights. Do you have any advice for people who write plays?

A:  Don’t listen to people that try to give you advice, I guess. They’re also in the dark.
Q; And where can people buy tickets to come see Glee Club?

For the record, my high school (a private school of some note in the NY metro area) indeed had a glee club.

Yeah, don't give Freeman an inch. We had a drama club. Well, actually, it was called a drama guild for some reason.

A drama club was founded in my senior year, headed by some younger students I didn't dislike and advised by a teacher I liked enormously.

But then, I spent my high school years as a critic.

Well Seth Christenfeld, I stand corrected. There is a private school of some note in the NY metro area with a high school Glee Club. And that is of some note.