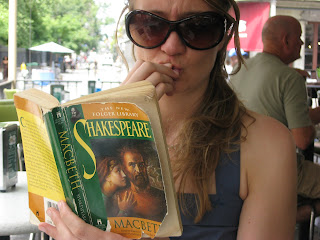 
Q: Tell me a little about this play you have coming up. What is it about, who is doing it and what is the artistic team?

A: My play is called Creature and it's loosely based on a 15th century autobiography called The Book of Margery Kempe. It's about a woman who desperately wants to become a saint even though she's totally unsuited to this vocation. Margery is vain, selfish, carnal, gluttonous, a loud weeper, materialistic, jealous, prideful - well, utterly human, really, and the book is a hilarious and kind of heart-wrenching account of her campaign to remake herself. I have great fondness for people who attempt things they can't possibly succeed at, and I fell in love with her and now I have this play. A weird play set in 1401 featuring demons and talking hazelnuts and saints - and rife with historical inaccuracies. New Georges and Page 73 are co-producing Creature which is a dream since I'm a huge fan of both these companies. The brilliant Leigh Silverman is directing and we have a terrific design team: Rachel Hauck is designing the set, Matt Frey, lights, Theresa Squire, costumes and Katie Down is composing music. At our first meeting Leigh made the designers read the play out loud and they were pretty good.

Q: You spent the last year as the P73 Playwriting Fellow. What was that experience like?

A: I'm in the middle of my fellowship right now and it's fantastic to feel so supported. I traveled to Moscow in May to research my new play There Are No More Big Secrets and this week I'm directing a workshop of it myself. P73 has given me great actors, a beautiful rehearsal space, a stage manager, a dramaturg and an assistant director. A whole staff! Also, Asher and Liz are great about helping me organize a writing/development schedule and giving helpful feedback. I'm so spoiled right now. I don't know how I'm going to go back to my regular life.

Q: You are also an Obie winning actor. How does your acting inform your playwriting and vice-versa?

A: Well, obviously I identify with the actors when I'm working as a playwright and I want to give them interesting things to do onstage. I could never write a character who just brings in the samovar, I would feel too guilty. And when I'm working on a new play as an actor, I feel a tremendous responsibility to the playwright, to do right by their play. Actually, I've had to learn to turn the volume down on that feeling because it can be paralyzing. Sometimes the best way to look out for someone's play is to really look out for yourself, your role. Actors and playwrights have a unique relationship and I'm lucky I get to experience it from both sides. When you're a playwright and an actor shows up and gives life to your play that's a remarkable achievement in human communication. It's better than ESP. And as an actor, when a playwright gives you a great role to inhabit, well, you've seen All About Eve? When Karen asks Eve, "You'd do all that just for a part in a play?" I'm not as evil as Eve, but I totally get her answer, "I'd do much, much more for a part that good."

Q: In the nineties, you were a member of the infamous theater company in Seattle, Printers Devil. What was that experience like and what sort of theater foundation did it give you?

A: Infamous? Yikes. We were a small company, so in addition to acting and writing, I got to direct, work at fundraisers, find props, sew curtains, even run the sound board, which they asked me to please never do again. I learned about every aspect of making a play. Also I met great playwrights - Sheila Callaghan, Naomi Iizuka, Anne Washburn, Chay Yew, Erin Cressida Wilson, Dan Dietz. Melissa Gibson and her husband Matt Frey stayed at the apartment I shared with your wife, Adam. And now Matt is designing the lights for Creature. So many of those relationships have come back around in wonderful ways.

A: I have too many, so I'm just going to name one playwright: Maria Irene Fornes. In my twenties, all of my plays were - well I called them homages to Fornes, but really they were blatantly imitative. Also, my mom. She directed me in my first play when I was 7 years old - I was Hermia in A Midsummer Nights Dream. She made me fall in love with theater.

A: Good theater? I'm an omnivore. ERS's Gatz is still one of the best things I've ever seen and I also cried all the way through Next to Normal. Tony Kushner, Paula Vogel, Mac Wellman, Caryl Churchill, Chuck Mee, and Craig Lucas have all influenced me tremendously and are the people who first made me excited about playwright. I also love Lev Dodin, Robert Woodruff, the musical Annie, puppet theater, Anne Reinking, and the Oregon Shakespeare Festival, which is where I saw my first play (Macbeth). Plus, I'm a huge fan of so many of my peers, the list is too long. The only stuff I don't like is theater that's predictable, cynical, shoddy, pretentious. Actually, sometimes I like pretentious. Also, I'm in constant peril of making theater I would hate myself.

A: Invite friends over to your apartment and make them read your plays out loud. And see as much of your peers' work as you can. By which I mean to say: Find your people.

Q: What advice do you have for actors starting out?

A: Whew. This is the toughest question. I did everything wrong, but I'm pretty happy, so: Skip grad school, move to NYC when you're past a "marketable" age, don't get a headshot until you're 30?
What I did right - and what I recommend to younger actors - is to seek out playwrights and directors you admire and find a way to work with them. My relationships with directors Brooke O'Harra (Two-Headed Calf) and Ken Rus Schmoll (who just won the Obie for Telephone) have been immensely gratifying and provide a sense of artistic continuity in my life as an actor.
Also, when we were living in Seattle my now husband, director Kip Fagan, had a copy of David Adjmi's play Strange Attractors lying on his bed. I picked it up and after reading the first three pages knew that I had to be in it. So, I called Adam Greenfield, who was working at the Empty Space then, and got myself an audition. I'm making it sound more All About Eve than it was. I didn't try to seduce Adam, it was just a phone call. It turned out to be one of the most exciting roles I've ever played.

Q: Link please for your show:

Q: Any other plugs?

A: I'll be acting in Annie Baker's terrific new play Circle Mirror Transformation at Playwrights Horizons in the fall. I was working on it yesterday and I'm really jealous of Annie. Her writing is stunningly precise and nuanced, she's able to conjure the private suffering of her characters through these hilarious, often tiny public moments that make you laugh and also feel deeply uncomfortable. .Okay I'm not telling you any more because Circle Mirror Transformation starts previews on September 24 and you should just come see it..
http://www.playwrightshorizons.org/current_season.asp
Posted by Adam Szymkowicz at 8/10/2009 10:09:00 PM