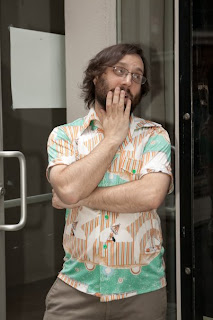 Q: How did you start writing plays?

A: I think I wrote my first play in eighth grade. It was about a group of wacky characters in an insane asylum, and it turned out that (SPOILER ALERT) the guy who was about to get released was the one who planted the bomb. I had been stagestruck for a few years at that point, and I realized that writing was even more awesome than acting, since then you could take credit for ALL the jokes in the play, not just the ones that stemmed from your work onstage. In either event, there’s nothing sweeter than the sound of laughter inspired by something you made up.

Q: Tell me please about The Brick Theater and what you do there.

A: The Brick is a performance space in Brooklyn that I’ve called my creative home for the past seven or so years. It was founded by my good friends Michael Gardner and Robert Honeywell, with whom I worked many times on many different projects both before and after its founding. After a couple years of doing stuff at the space, my wife and partner Hope Cartelli (with whom I run our production company, Piper McKenzie) and I came on as Associate Directors. The role is fairly fluid – we all contribute to various decisions involving programming and vision and marketing and development and festival planning and overall strategy, and we all step in and do whatever we can whenever someone is out of commission for a show or some other kind of project. There’s a lot of floor-sweeping and heavy lifting and standing behind the box office counter being polite. The Brick focuses on new work, both from within the group of us that run the place and through co-productions with other artists and companies whose we work we love. We’re most known for our festivals, such as our yearly themed summer festival (the most recent edition of which was June’s Antidepressant Festival), the annual New York Clown Theatre Festival (a condensed version of which is running right now under the title Amuse Bouche), and the upcoming Fight Festival, which is devoted to new works showcasing stage combat.

Q: Tell me about your show coming up in the Fringe Encore Series.

A: It’s called Willy Nilly: A Musical Exploitation of the Most Far-Out Cult Murders of the Psychedelic Era, and it’s a tasteless rock’n’roll spoof inspired by the Manson Family, written and composed by the inimitable author, impresario and performer Trav S.D. I’m in the director’s seat on this one, but Trav’s been a great collaborator, and I take as much pride in it as if I’d written it myself. It’s like Helter Skelter viewed through the filter of Laugh-In, taking the horrifying real-life events of the Tate-LaBianca murders (which took place 40 years ago last month) and turning them on their head for a satirical look at the Sixties and the media culture that allows us to be more fascinated by the homicide of a marginally talented B-movie actress than the more widespread violence wrought by our own government and way of life. But that’s all subtext – on the surface, it’s boobies, garage punk and low comedy as far as the eye can see.

Q: You knew Tom Perry (who was in the year above me in high school) when you were in high school. He was a legend in his own right in my school. What was the program you were both in?

A: We met at Center for Creative Youth (CCY), a summer arts program that took place at Wesleyan University in Middletown, CT. It was the first time most of us artsy geeks had ever spent a significant amount of time away from home, which made it a kind of paradisiacal enclave in which we were spent four weeks gushing, “Good God, there are other people like me out there!” In the days before the Internet, this was the only way most of us were able to make this amazing discovery. (Of course, now we’ve all been finding each other again on Facebook, bringing it all full circle.) Tom and I were both in the writing program, which was quite possibly the most bohemian experience in my life to date – we’d all get up in the morning and spend most of the day sitting around in cafes or outdoors writing, walking around, gossiping, and talking about towering intellectual ideas we barely understood. I didn’t even smoke or drink or anything, but, boy, it was great. Tom and I have hung out a few times recently, after fifteen years out of contact, and we were able to pick up right where we left off without missing a beat – which has also been the case with the other CCY friends I’ve encountered over the past couple of years. It was a pivotal experience for all of us.

Q: Tell me a story from your childhood that explains who you are as a person or as a playwright.

A: Well, the joke version of this answer, which is also probably the most accurate one, is that when I was eight or so a reckless Rube Goldberg situation of my own devising – involving an improvised, tablecloth-based “fort” on the deck behind my house – led to a brick falling square on my head from several feet in the air. My family rushed me to the hospital and, instead of giving me stitches, the doctor had to staple my head shut with a giant medical stapler. A few weeks later, I had to go back and get it removed with a giant medical staple remover. This incident explains my fascination with complicated slapstick, my fierce love of George Herriman’s Krazy Kat, the kismet behind the theater I eventually ended up working for, and the probable (if minor) brain damage that contributes to my writing, sense of humor and general outlook.

A: The kind that: • Combines an unexpected but effective confluence of elements • Strikes an artful balance between rude energy and sophisticated precision • Makes you forget the world outside of the room • Employs its own distinct style • Has a sense of humor (however subtly deployed) • Is impossible to put into a single pre-existing bucket

A: Don’t wait for someone to do it for you – do it yourself. You may well be as brilliant as you think you are, but the world’s probably going to need a lot of convincing. And learn how to direct – even if you discover that you’re terrible at directing your own plays, it’ll give you a greater sensitivity to every aspect of the theatrical process and to different voices and styles – all of which can only improve your writing, not to mention your eventual relationship with other directors.

Q: Link please for the show and any other plugs:

All the info for Willy Nilly can be found at http://www.facebook.com/l/d28d2;www.pipermckenzie.com/willynilly and our blog, The Piperline, at http://www.facebook.com/l/d28d2;pipermckenzie.blogspot.com. A couple of other plugs: I’m one of the playwrights participating in the Vampire Cowboys’ Saturday Night Saloon series – http://www.facebook.com/l/d28d2;www.vampirecowboys.com/events.htm. We’re doing “season two” of a serial we performed two years ago, entitled Lady Cryptozoologist, which is a rough-and-tumble globe-trotting sci-fi adventure romance comedy featuring yetis and chupacabras and scientists carrying on in a humorous fashion. The Saloon is an incredible and unique theatrical event – with six different mixed-genre serials running over five months, it’s an amazing crucible of creative energy, and I’m thrilled and proud to be a part of it. Also, Piper McKenzie’s next show will be debuting at The Brick’s Fight Festival in December – Craven Monkey and the Mountain of Fury. It’s a Darwinian martial-arts fairy tale about an outcast monkey whose quest for revenge leads to a series of violent confrontations with Mother Nature and her grotesque minions. (Yes, I have a thing for monsters and other creatures.) It will be a primarily movement-based piece (like our 2007 show Macbeth Without Words), with storyteller voice-over, bizarre costumes, and insane animal fight choreography by another playwright you’ve profiled, Vampire Cowboys’ Qui Nguyen.
Posted by Adam Szymkowicz at 9/15/2009 07:46:00 AM

The dude is totally right, and there is no suspicion.